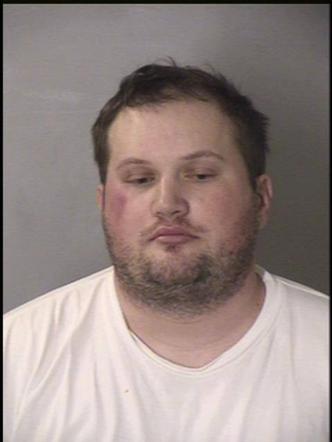 Patrick Feaster is the former Paradise Police officer who’s awaiting trial for involuntary manslaughter. A charge that came only after Andrew Thomas succumbed to the gun shot wound Feaster put into his neck “accidentally” after he wrecked his jeep in a DUI related accident the night before Thanksgiving.

Feaster appears to have taken to the bar life and hitting the bottle to deal with his frustrations of facing trail. According to Action News Now:

According to a Chico Police arrest log, Feaster was arrested Sunday at a home in Central Chico.

The 31 year old was apparently arrested, along with his younger brother, 28 year old Timothy Feaster, for being drunk and disorderly.

They were both booked into the Butte County Jail and are charged with misdemeanors.

While this might not seem like that big of a deal because bar fights happen all the time, I remind you that Feaster is out on bail. He was given the thin blue line special treatment of being able to turn himself in, released on personal recognizes bond and NOT having more serious charges brought against him; like murder. That seems to mean nothing to him since him and his bro hit the streets and got rowdy.

This is exactly the reason that most people who are charged with such crimes remain in jail. They are unable to handle the pressure of possible prosecution and make very bad choices; commonly with drugs and alcohol. Which is another thing to bring up, most bonds don’t permit those on bond to use mind altering substances. I guess we’ll get to see if Feaster will be given thin blue line treatment again when he’s back in court on the manslaughter charge today. I know if it were me I’d be going to jail with a revoked bond, we’ll see what happens to the former LEO.