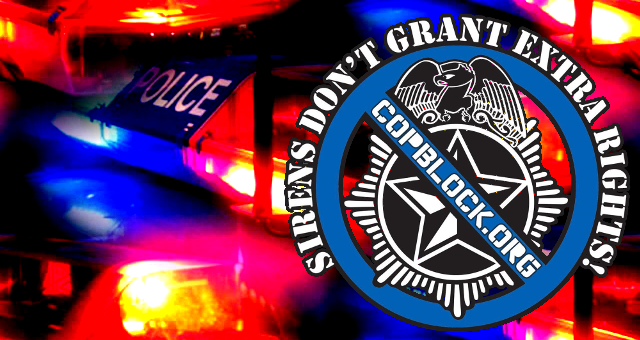 Tonight an Iowa City Cop was forced to break a stupid law because I was following it. Alright, he wasn’t actually forced to, he just did it because he could. And I cannot say I blame him. The law he broke is so blatantly stupid that I often feel like an idiot myself for following it.

As I was driving to the grocery store to do some late night shopping, my favorite kind, I found myself trapped pointlessly at a stoplight with no intersecting traffic, which is how it always is along this stretch of road at night. It was about 12:30am. After waiting for what always seems like an eternity, the light finally changes. Just as I get ready to proceed through the intersection the red and blue sirens blared out their lights into the night, and I see a cop speed up and run the light, which was red half a block before he got to it. After his little spectacle of piggy privilege and badged entitlement, he slowed back down and turned his lights off, then proceeded unhurriedly on his nightly rounds. Probably haunting his favorite speed traps and hidden places to park whenever he gets the urge to whip out Pornhub on his phone and pull a work-n-jerk. Unfortunately it happened too quickly for me to catch on film. The light situation, that is.

This a pretty common occurrence here and just about anywhere that shiny badges and lights get you a free pass from the laws you took an oath to uphold. Cops often seem to feel that they are above traffic laws, the same laws they use to run revenue generating scams in the name of safety. They take advantage of not just their position, but of the department issued equipment funded by taxpayers, and sirens are a great free pass through the jungle of traffic that the rest of us poor suckers are forced to survive in without such perks. Yet in the case of the cop that ran that light, I cannot say I blame him one single bit. It is a stupid traffic situation kept intact only by stupid laws.

Here is a picture of the area where this happened. The cop is the blue arrow, I am the yellow and the red is the intersection in question. Green diamonds mark just a few of the other passages across this relatively short stretch of highway.

Iowa City traffic planners are amongst the stupidest people who have ever lived. I am pretty sure that if you show up to the interview for that job and are intelligent enough to respond to your own name, they will refuse to hire you. The short stretch of Highway 6 that runs east/west south of Iowa City is their crowning achievement in idiocy. And while high traffic and the local custom of driving like you’re on your way to your third lobotomy make it a nightmare during the daytime, it is a million times as frustrating late at night when the planned traffic patterns and stoplight functions are completely and utterly devoid of any meaning and purpose. The highway crossing traffic is forced to remain stopped at a light even when there is no coming highway traffic in sight. And those stoplights will eventually detect your presence and signal a light change an infuriating amount of time later. Yet as it turns out, about the only time you will see a car approaching the intersection on the highway is right after the light you triggered finally turned red. Which is what happened to that cop tonight.

Now if I would have just ran the light immediately after pulling up to the it and checking for clearance, which I would have done if there were no other cars in visual range, it would not have triggered the change and the cop could have passed through without the legal and ethical infraction. Yet if I would have done so, it is almost certain the same cop would have ticketed me for breaking the same laws which he was compelled to break because of the stupid traffic situation I was forced to deal. There was not a single chance that anybody could have had a rational experience given the nature of the traffic engineering/laws at play.

The simple answer here is the blinking red, which is essentially a stop sign, and is often used in places where the traffic planners were not fed from lead bottles as a baby. The trend here in Iowa City seems to be an ever increasing amount of regimentation and control of traffic through various methods, most all of which do nothing to ease traffic tensions. This seems to be a growing trend nationwide and the problems just get worse as more city, county and state planners agree to certain traffic-planning standards in return for federal road grants. The shark was jumped on safety long ago and now its just a mindless repetition of arbitrary patterns being foisted onto areas of traffic where they make things more confusing and sluggish than harmonious.

I suspect that this is why Iowa City drivers are the way they are. These traffic mazes are like giant conditioning devices that mold peoples driving skills and ideas over time. It causes people to act in uncertain and skittish ways behind the wheel. The constant appeasement of arbitrary traffic constructs has removed from them any confidence or common sense while driving. Instead of following the laws of traffic, we are forced to follow traffic laws, which are always becoming increasingly irrational and out of place.

Obedience to the irrational has an effect of dumbing down the obedient over time and making them incapable of critical thinking and confident actions. Traffic paradigms are a very easy place to see this happening. But the same kind of regimentation of more and more mindlessly arbitrary laws concerning every facet of life, and obedience to them, is having the same overall effect on a much larger scale. The nanny state acts as both an overprotective mother and vengeful father. The outcome is that we become less reasonable, confident and independent, and increasingly stupid and sheepish over time. For proof of this just turn on your TV and watch as the Sportscenter-like news cast parades the idiots who we will soon select a new ‘leader’ from. This all would never be possible in a land of logical and intelligent people. It is only in a society where we are being dumbed down through obedience and dependency at every corner, and every intersection, in which such a massive widespread display of wanton human failure could ever emerge.

Our society is designed to make and keep us stupid.

Stupid people are writing an endless stream of stupid codes and laws.

Obeying them makes the obedient stupid.

Breaking them will put you in a potentially deadly interaction with the stupid people who enforce them while breaking them.