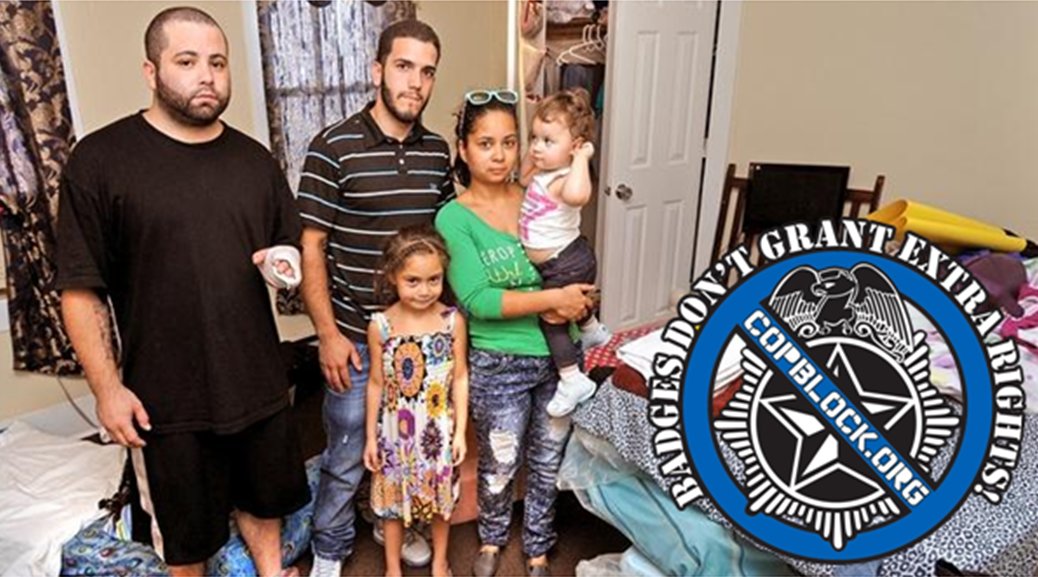 A Worcester, Massachusetts family has filed a lawsuit after being held at gunpoint during a no-knock SWAT team raid on their apartment looking for a suspect that lived there before they moved in and had already been arrested.

State police detectives and a Worcester SWAT unit were looking for Shane Jackson on Aug. 19 but instead found 23-year-old Marianne Diaz. Diaz had moved into the home in May with her children, 23-year-old fiancé, and roommate.

Prosecutors initially placated the situation and said that police acted on the “best information” they had before obtaining a search warrant for Jackson, who it turns out had been arrested nearly two weeks earlier and had moved out of the apartment in 2014.

Diaz said the SWAT team broke down her door just after dawn adorn in riot shields and helmets – and pointed guns at her 7-year-old and 18-month-old daughters as they shook in terror.

“Stop fucking crying and take care of your fucking kids,” Diaz said one officer shouted before a female officer frisked her nude body. She was naked because she was getting her children ready for the morning and said she was not allowed to cover up for about 10 minutes.

“It was terrorizing, and the worst thing I’ve ever been through in my life,” Diaz said. “They were loud, vulgar and disgusting in behavior. My [7-year-old] daughter was freaking out [and my 18-month-old] was just shaking, and she couldn’t stop.”

Police affidavits show no indication that officers had firsthand knowledge that Jackson still lived at Diaz’s home, that the woman had any relationship with him, or that any surveillance had been conducted on the residence.

Diaz said officers entered through the front and back doors of the third-floor apartment, threw her fiancé and roommate to the ground, and began ransacking the place.

“I screamed and tried to explain my wrist was messed up,” Diaz’s roommate Joshua Matos said. His fractured wrist was re-broken during the raid. “They told me to shut the fuck up,” he added.

After officers failed to turn up any drugs, weapons or the man they were looking for, Diaz said she heard one officer say, “Oh shit, the snake got away,” like the team had only narrowly missed the sly criminal.

Diaz asked for a review of the botched raid following the incident but prosecutors said the police action “was executed in the manner it was for the safety of all involved,” and refused to take any action against the officers involved.

In addition, police have said they had no reason to question the intelligence since it had been sanctioned by the courts, and that all policies were followed in obtaining the search warrant for the residence.

The lawsuit, filed in Worcester Superior Court on March 11, names Worcester City and Massachusetts state police, individual officers, and an anonymous informant officers said prompted the raid after he or she claimed that Jackson was inside the apartment at an earlier date.

It alleges 10 counts, including civil rights violations, assault and battery, trespassing and intentional infliction of emotional distress – and is seeking compensatory damages for mental duress, loss of wages, $9,000 in medical bills, and attorney fees.

“As a result of the raid, [a 7-year-old girl] refuses to sleep alone and has treatment for anxiety and fear that, in her words, ‘army men’ will again invade her home,” the suit reads. “Her younger sister was treated for sleep disruption and still awakens some nights in terror.”

What happened to Diaz and her family isn’t an isolated incident. Officers engaged in this these types of actions often mistake the residence they intend to raid for another or act on poor intelligence that their friends in the justice system approve on their behalf.

Many no-knock raids end in bloodshed – sometimes as a result of a startled home owner or pet reacting to the threat of an intruder who get gunned down by police in the process. Fortunately for Diaz and her young children, that wasn’t the outcome on Aug. 19.

“You can imagine 10 officers looking and pointing guns at a naked 23-year-old mother protecting her two kids,”  family attorney, Hector Pineiro said. “The horrific language and pointing of weapons at children cannot be justified under any circumstances.”