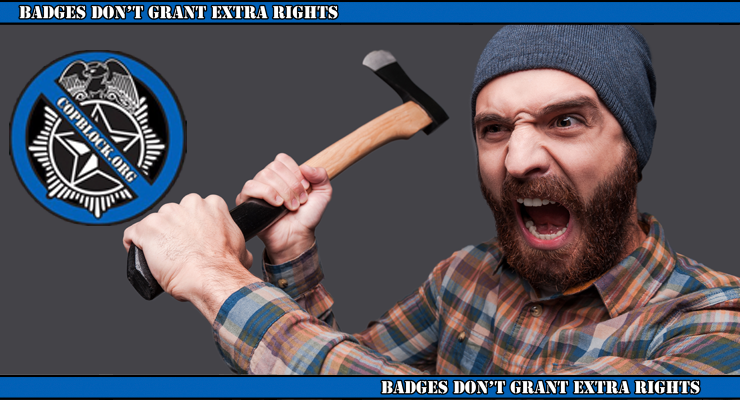 This is the second of two Sunshine Week articles highlighting some of the things Northern Virginia Cop Block uncovered using the state’s Freedom of Information Act (read the first one here). The documents discussed below are actually from court documents that were obtained after we noticed one lawsuit that stood out from the others filed against the Fairfax County Police Department—a $240,000 settlement to Elena Norfolk in 2008 because “police failed to protect claimant.”

In a case of no good deed goes unpunished, Norfolk agreed to let a friend stay at her house to get away from an abusive husband, and then found herself the victim of a brutal attack from the drunken husband, after Officer Douglas Middlebrooks encountered the assailant, drunk and armed with a knife, and sent him home instead of arresting him. Fairfax County spent $21,000 and at least 4 years shamefully arguing that Officer Middlebrooks had no duty to protect before finally settling the case. Read the shocking details straight from the court documents:

In April of 2006, Fairfax County police were called by ___ Burris to her home at _____________. Mrs. Burris reported to police that her husband [Joel Burris], while drunk and in a fit of rage directed at Mrs. Burris, had operated his company work van at a high rate of speed up and down his street and nearly struck his daughter.

A protective order effective for one year was thereafter granted to Mrs. Burris in April 2006 by the Juvenile and Domestic Relations Court of Fairfax County. In April of 2007, around the time of the expiration of the protective order, Mr. Burris was arrested and convicted for being drunk in public. In June of 2007, he vandalized several cars at a local restaurant and slashed the tires of Ms. Norfolk’s car while it was parked at her apartment. Ms. Norfolk called the police. Mr. Burris later confessed to these crimes.

Prior to these incidences, in 2007, Mr. Burris, going back to 1992, had struck his wife several times and at one point had held a gun to her head, saying that “If l can’t have you, no one else can.” Mr. Burris would commit these acts after drinking alcohol.

In April of 2007, Mr. Burris entered an intensive outpatient program at the Harrison House to address his problems with alcohol and his obsessive, violent behavior with Mrs. Burris. On his second day, he was transferred to Harrison House’s twenty-eight day inpatient program because of the severity of his problems. Notwithstanding his treatment at Harrison House, Mr. Burris’ relationship with his wife continued to deteriorate. Mr. Burris suspected that his wife was having an extramarital affair or affairs.

In April of 2007, Mr. Burris, believing that Elena Norfolk was either facilitating these extramarital affairs by allowing Mrs. Burris to meet men at her house or was herself engaged in an affair with Mrs. Burris, confronted Ms. Norfolk, accusing Ms. Norfolk that the deterioration of his marriage was all Ms. Norfolk’s fault.

At no time did Ms. Norfolk facilitate any extramarital affairs for the benefit of Mrs. Burris nor did she have an affair with Mrs. Burris. Following this accusation, Ms. Norfolk, who had for years socialized with both Mr. and Mrs. Burris before their marriage deteriorated, ceased her communications with Mr. Burris.

Ms. Norfolk complied with the officer’s directive and drove Mrs. Burris to her apartment. That evening, Mr. Burris relentlessly engaged in a series of harassing, threatening calls to Ms. Norfolk on her cell phone and her landline. Before the weekend was over, Mr. Burris’ calls to Elena Norfolk exceeded fifty. In several of these phone calls, Mr. Burris alluded to the fact that he was drinking alcohol.

Saturday morning, Ms. Norfolk, alarmed over the number and content of the calls, called the police. A Fairfax County police officer was dispatched to the scene, listened to some of the calls, and advised Ms. Norfolk to have a warrant sworn out against Mr. Burris on Monday.

That same Saturday, Mrs. Burris spoke to her daughter over the phone. She told her daughter that she wished to come home to get a change of clothes. The daughter advised her mother that Mr. Burris was drinking and because of his anger and erratic behavior it was too dangerous to return home. Consequently, Ms. Norfolk and Mrs. Burris went to a local Wal-Mart to purchase clothes and an emergency cell phone for Mrs. Burris.

The following day, Sunday, Mr. Burris arrived unannounced at Ms. Norfolk’s apartment. He delivered one of Mrs. Burris’ cats. He went back to his car, phoned Ms. Norfolk, and stated to Ms. Norfolk that the cat was the only thing that was safe at the apartment. Ms. Norfolk told Mr. Burris to leave the premises. She told him that if he did not, she would have him arrested for trespassing. Mr. Burris then sent a text message where he simply referenced the name of Ms. Norfolk’s cat. He also left a voice message where he pretended to address one of the other cats still in his possession, asking the cat what it thought it would be like to be taped down in the road and have its heart ripped out.

Upon receiving these threats, and believing that Mr. Burris was intoxicated, Ms. Norfolk once again called the police. Detective Middlebrooks responded to Ms. Norfolk’s call. Upon his arrival, Ms. Norfolk and Mrs. Burris relayed to Detective Middlebrooks the history of the weekend- Mr. Burris’ stalking of his wife, his campaign of harassment, his threatening phone calls, his trespassing, and his inebriation. They also advised Detective Middlebrooks of Mr. Burris’ history of alcohol abuse and his obsessive behavior, his holding the gun to Mrs. Burris’ head, his violent behavior when drunk, and the need for a protective order. Both advised Detective Middlebrooks that the dangerousness of the situation was escalating, that someone was going to get hurt, and that something had to be done, particularly in light of the fact that Mr. Burris had been drinking and was now invading what had once been a safe haven for Mrs. Burris, a place which Mrs. Burris had retreated to at the direction of other County police officers and which she continued to stay at because of the advice of her daughter.

Detective Middlebrooks noticed that there was knife in the passenger section of the vehicle. He asked Mr. Burris to submit to a PBT or pass a breath test. This device registered a BAC of .10. Mr. Burris’ daughter at that point happened on the scene. Detective Middlebrooks asked her to drive her father home. The daughter, fearful of the situation, declined saying “He is not done yet.”

Detective Middlebrooks then turned to Mr. Burris saying “You are too drunk to drive.” He threw Mr. Burris’ keys to him and ordered Mr. Burris to walk home and cool off.

Later that evening, Mrs. Burris’ daughter, who had come to the apartment to retrieve one of the family cats, believed that she saw Mr. Burris at Elena Norfolk’s apartment complex.

Elena Norfolk, hearing someone run away, again called the police. Mr. Burris could not be located.

At approximately 10 p.m., Mr. Burris got into his truck that was parked at his home. He armed himself with a hammer, a hatchet, and the knife. Upon arriving at Ms. Norfolk’s apartment complex, he drove the pickup truck through Ms. Norfolk’s ground level, sliding glass patio door.

Ms. Norfolk’s skull was cracked and shattered and she sustained deep lacerations to her shoulders. She had to be rushed by ambulance from the scene to Fairfax Hospital where was she was diagnosed with a traumatic brain injury and emergency measures were undertaken to save her life.

Mr. Burris was arrested later that night at a nearby gas station. Before being apprehended, he stabbed himself in the stomach with the knife he had earlier armed himself with.

If Only There Had Been a Police Officer There to Intervene!

What happened to Officer Middlebrooks? Ms. Norfolk’s lawsuit alleged that Middlebrooks breached his duties as a police officer “by refusing to arrest and take into custody Mr. Burris after receiving reports and confirming through his investigation that Mr. Burris, an individual who had a documented history of violent behavior while inebriated, had stalked, harassed, and threatened Ms. Norfolk and Mrs. Burris, both in public and while at Ms. Norfolk’s home, had done so while drunk in public, and had operated a vehicle while above the legal limit of intoxication.”

“Detective Middlebrooks’ negligence was gross in that it amounted to an utter disregard of prudence amounting to a complete neglect of Ms. Norfolk’s and Mrs. Burris’ safety and the care and safety of others. As a direct and proximate result of Detective Middlebrooks’ gross negligence, Ms. Norfolk sustained serious and permanent injuries and great pain and suffering, requiring her to expend diverse sums for two surgeries, medication, and treatment in an effort to cure herself of such injuries, may in the future expend additional sums in a further effort to cure herself of such injuries, and has lost time from work and may lose time from work in the future. “

The settlement amount fell far short of the $1.2 million Norfolk sought through her lawsuit. Hopefully that at least covered the significant medical bills she incurred as a result of the attack.

Meanwhile, Officer Middlebrooks does not appear to have experienced any adverse impact on his career in law enforcement, based on information from the Fairfax County website, which lists a Douglas Middlebrooks as a TFO in the Helicopter Division and a FOIA request for employee salary data which showed a current salary of $89,703.87.

In 2008, Joel Burris was “found guilty of feloniously and maliciously causing violent injury with the intent to maim, disfigure, disable and/or kill, thereby severely injuring and causing Ms. Norfolk to suffer permanent significant physical impairment.” He is currently incarcerated with a release date set for 2017.

253
SHARES
FacebookTwitterGoogleRedditTumblr
DiggLinkedinStumbleuponMailPrint
You Can Support Cop Block by shoppping on Amazon using the banner below:
BANNERS ARE CLICKABLE