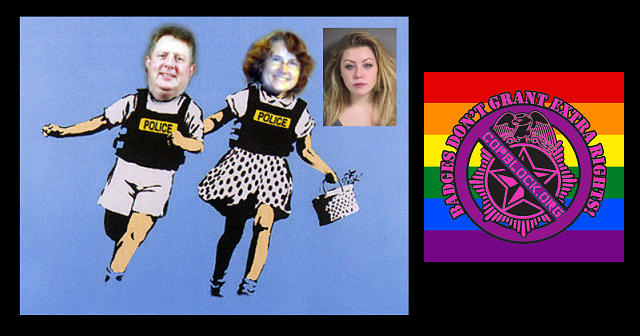 Iowa City, Iowa prosecutor Janet Lyness is a walking collection of hypocrisy, lies and irony. While parading herself as a progressive liberal, her tenure as county attorney has been ripe with all of the small-minded and petty fascism of any backwoods bible-thumpin’ republican. Iowa City disproportionately arrests blacks for non-violent drug offenses, more so than most anywhere else in the nation. And those arrests are bolstered by a solid record of prosecutions.

Unfortunately, her daughter just fell prey to this system of predatory policing and prosecution that she is at the center of. According to KCRG:

According to court records, 18-year-old Gabrielle Lyness Wadsworth was pulled over after she went the wrong way down a one way street around 1:20 this morning. Iowa City officers write in the complaint that the department’s K-9 alerted to the odor of narcotics and then they searched the vehicle. They say they found marijuana, a homemade smoking device and a grinder in her purse.

Officers arrested Wadsworth at 1:24 am and she was released from the Johnson County jail at 3:15am.

County Attorney Janet Lyness was not immediately available for comment.

Two years ago a man named John Zimmerman challenged her position in elections, but was unable to get the Democratic Party nomination. John was unique in that he understood very well the role of the country attorney in local justice systems. When prosecutors are unwilling to prosecute certain crimes, the police are discouraged from making arrests for those crimes, as there is no revenue to be generated by doing so. And no gratification for cops who just like to see people punished for victimless crimes. So his entire campaign was all about a promise to reduce compulsive prosecutions and limit the application of a number of marijuana and other victimless crimes. Lots of Iowa Citians were ecstatic about someone who actually had a plan for progress leading up our justice system. But as you walked from those poorer/working class neighborhoods into those of the well-established wealthier academic ‘liberals, the Lyness signs started popping up. The same people who voted locally to increase social welfare programs which brought in refuges from overcrowded Chicago ghettos and increasingly condemned project housing and with it more crime are the ones who now want to see those people’s situations made even worse in order to maintain some false sense of security. Their apparent generosity does not extend as far as their laden bigotry and fear. So John, after having sacrificed years and of time and debt to get the education and credentials needed just to run for this position, never had a chance.

Yet if he were the county attorney, Gabrielle would not have been arrested for having a small amount of plant material. The awful ordeal she is about to go through is the direct result of her own mothers actions. I hope that for Janess, that stings more than just a little bit. But that sting will be nothing compared to the countless miseries she has put others through by encouraging cops to make arrests for victimless crimes by compulsively prosecuting the arrested.