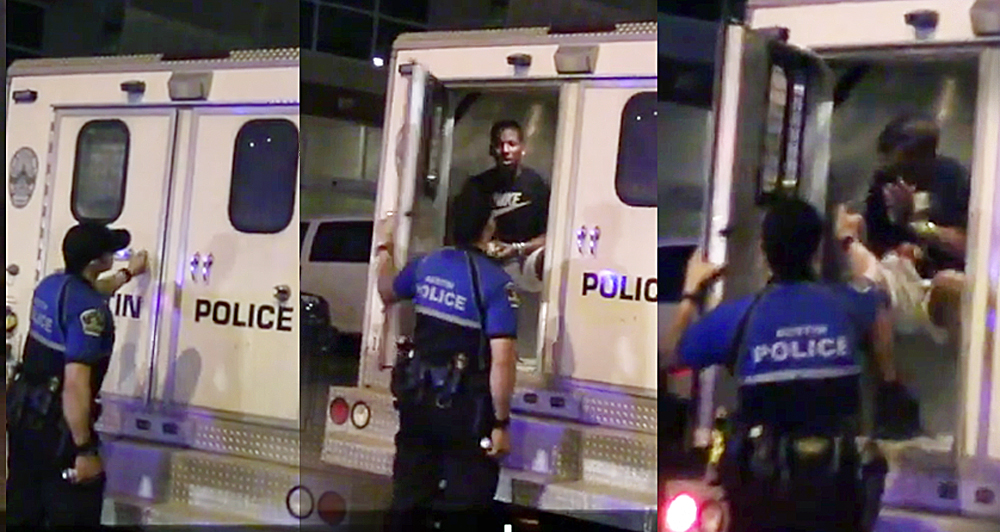 In the first case, the man apparently had been kicking the back of the door after he had been arrested, prompting Austin police officer Cameron Caldwell to open the door and pepper spray him.

“Wow, you asshole,” yelled a woman who had recorded it. “I saw that, I got that on film, you abusive asshole.”

The woman who recorded it is a member of Peaceful Streets, who have been out in full force for several nights during the city’s SXSW festival, recording police as they have done so many times in the past.

In their video, they pointed out that Caldwell violated Austin police policies that only allow the use of pepper spray to subdue violent suspects or to prevent a suspect from becoming violent after he or she has expressed the intentions to do so.

In this case, the man had his hands cuffed in front of him and he was already locked inside the back of a police van.

The video drew the attention of local media.

As a result, the police department announced it is conducting an internal investigation.

Caldwell was suspended for a day in 2013 for leaving his gun in a parking lot after he had gone hiking while off-duty. He apparently placed the gun on the bed of his truck and drove off.

The .40 caliber Glock was found by a citizen, who turned it into to police.

In the other pepper spraying incident captured on camera, a cop walked up to a pair of women who appeared to have been fighting, pepper spraying them to get them to stop without stopping to think whether or not somebody have been violently attacked against their will.

Above is a short video of the incident in the police van and below that is the longer video from Peaceful Streets that shows all the events that took place Thursday night, which was St. Patrick’s Day.
UPDATE: The second video shows Austin cops pepper spraying into the crowd, which has also been picked up by the media.