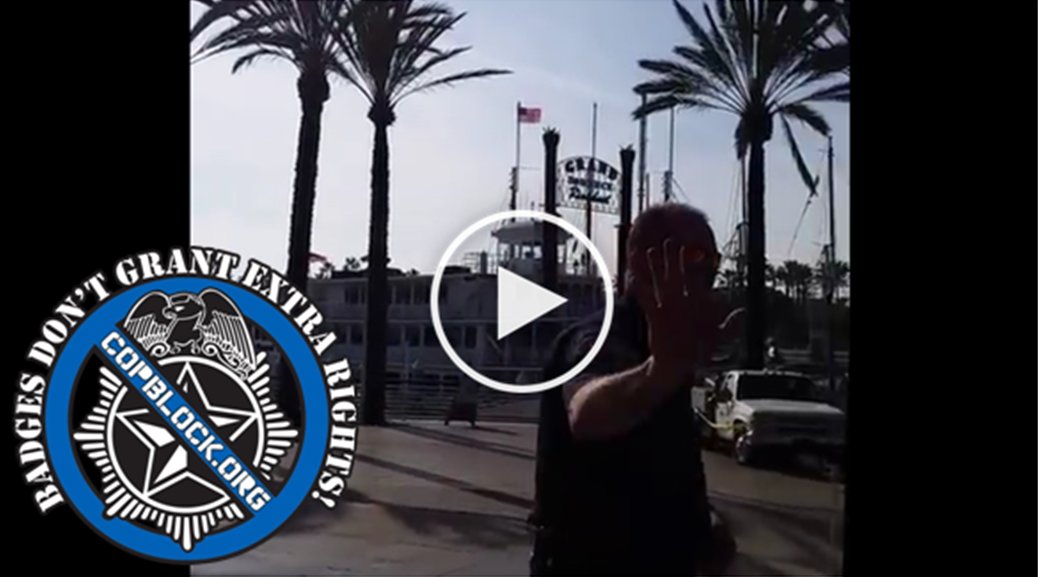 In a glorious video posted to YouTube, a California man lays down the law to a Long Beach police officer attempting to tell him its illegal to ride his bicycle on the Rainbow Harbor Esplanade boardwalk downtown.

The video begins with the cop, who identifies himself as “Lieutenant Cobel,” telling a number of riders to “walk your bikes” before he engages with the individual recording the interaction: 33-year-old Sean Fontenot.

Sean told me in an exclusive interview that he is a competitive BMX rider that routinely trains in the area and was approached by the officer at around 4:45pm on Saturday.

“If you’re doing tricks up here I don’t care,” the officer says in the video. “But once you get off of this, you can’t ride your bikes down here. You can pass that word along. That will keep people from complaining to me and I won’t come talk to you.”

“Is there a law change?” Sean asks.

“Yeah, you can’t ride your bikes on the boardwalk,” the cop responds.

“When did that law change?” Sean inquires.

“Uh, it’s been a law for quite a while,” the officer says.

That’s when the informed BMX rider breaks the cop down like double barrel shotgun by revealing that a civic code allows him to legally ride his bike and asserts his rights.

“16.16.502 is the civic sectional code that states you can ride your bicycles around out here,” Sean says. “So I don’t know what law you are referring to.”

“You want to pull out your civic code and you want to look up the code?” Sean responds. “16.16.502 states that you can ride your bicycle out here.”

“Exactly where?” the cop asks, obviously oblivious to the law.

“The Rainbow Harbor Esplanade which is this entire area…” the BMX rider asserts. “All the way at the end down there… to all the way this around here.”

“So did you get your law degree on Facebook?” the smug officer asks. “Where did you actually obtain that?”

“So do I have to have a law degree to be an informed citizen?” Sean responds, continuing to stand firm. “Is that what you’re saying?.. Is it wrong to know your rights?… Last time I checked, when officers come and try to invalidate your rights by telling you bullshit laws and enforcing their opinions, that’s not what you are supposed to do.”

“You’re supposed to support the law and what the law says is that you can ride your bikes out here,” the BMX rider adds. “You have no business coming up and harassing anyone telling them they shouldn’t ride their bikes.”

“Oh this is harassment now?” the cop asks.

“When you tell someone not to ride their bike when they’re legally able to ride their bike, yes that is harassment,” Sean states. “Your opinion is irrelevant. The law states we can ride our bikes. Now do you have anything else to say or are you going to leave us alone?”

Tucking his tail between his legs, the officer responds, “have a nice day,” before leaving the scene and Sean and several other riders celebrate their victory.

“[The officer] handled it pretty well, and definitely better than most cops that have had the unfortunate situation of trying to step on my rights,” Sean said. “You’ve got to love the ‘Did you get your law degree on Facebook?’ bullshit line that ALL cops try to pull on you.”

“As IF its wrong to know your rights,” he added. “This kind of attitude should be eliminated from the police department and you have to call them out on their bullshit like it is.”

Sean told me that he did make a mistake in the video citing the wrong code number.

According to the code, Sean is right however. 16.08.502, the code governing bicycle usage for the area, states only that:

Sean said that he has experienced many run-ins with cops that have harassed him for riding BMX. In this video uploaded in 2009, you can see another one of his police interactions. You can also check out his BMX videos on his YouTube home page.

“The officers of Long Beach often try to flex their authority on BMXers and Skateboarders,” Sean told me. “Our Civic Center reads, ‘The most bicycle friendly city in America,’ yet I have been ticketed three times now for riding my bike in areas where it is legal to do so.”

“These officers who write fraudulent tickets and attempt to bully the public have gotten several Internal Affairs investigations through the [CCP] Process, which has resulted in corrected behavior in many officers of Long Beach,” he added.

“Please use the system that is in place to counter these forces. While it may not seem like it [has] the ability to make large impacts, I can say that it has been a successful tool for me as a civilian to change the behavior of many police officers towards me and my lifestyle of riding freestyle BMX. KNOW YOUR RIGHTS!”