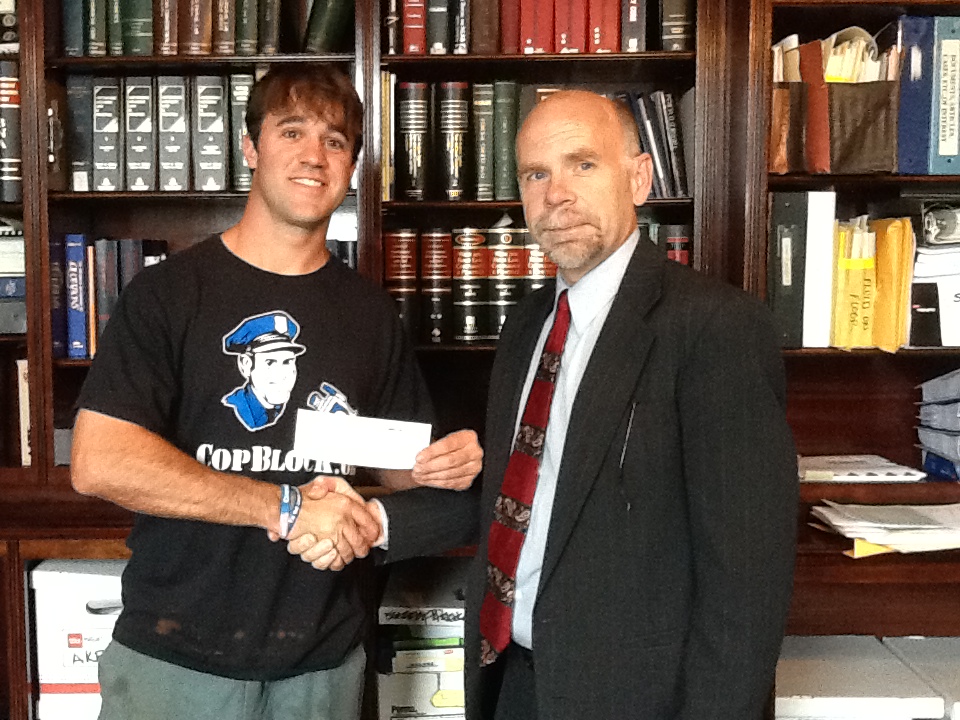 Write-up below by Nathan Cox originally posted to Virginia CopBlock:

About a year ago I was pulled over ILLEGALLY by officer Shawn Kelley of the VCU Police Department. He pulled me over because he didn’t like what I had say to him as I drove by him, which was “Stop Harassing People, we pay your paycheck.” To read the original story, updates and to see the video click here.

To give a quick synopsis of what happened though:

I was driving on 7th street headed for I64E when I passed a VCU Police officer who was pulled over to the side of the road. I happened to have a bull-horn in my back seat, so I grabbed it and as I drove by the cop said, “Stop Harassing People, We Pay your Pay Check.” He ended up jumping in his car and coming after me for what I said. The rest is on video He initially issued me a “Obstruction of Justice” charge/ citation, I told him I wanted to see his supervisor and would not sign it until a supervisor came to the scene. After much delay, Kelley finally called his supervisor to the scene. During the 15-20 minutes of waiting for him to come, I could see the officer flipping through books and making at least one phone call while in his car. A FOIA request showed that he actually called up the Commonwealth Attorney’s Office to figure out what he could charge me with. The Commonwealth Attorney, or an assistant thereof, told him to change the charge to “Disorderly Conduct”. So the supervisor finally showed up, wasn’t helpful, Kelley issued me a citation for Disorderly Conduct.

My initial court appearance I was found guilty for “being a jerk”. After appealing it, the second Judge, reluctantly dismissed the charge and said my speech was protected under the First Amendment.

So the plan was to file a lawsuit against the VCU Police for illegally pulling me over. My attorney, Tom Roberts got everything ready to file and asked VCU if they wanted to settle out of court. After more than a month of negotiating, they settled out of court on $10,000. Unfortunately, I won’t be seeing any of the money because my legal fees were that much – However it’s still a VICTORY FOR JUSTICE. I’ve tried getting comments from high ranking officers in the VCU PD, asking if they condone officer Kelley pulling me over, no-one is willing to comment.
I fear no lesson has been learned from this. All I wanted was for the Officer and the Police Department to simply admit he pulled me over for my speech, resulting in an unlawful traffic stop.

This is just one more example, of the Rolodex of examples of Police Officers, abusing their authority and desecrating the oath they took.

To ANY Police reading this: Let this be a warning.. and a lesson learned for you guys in Blue, You may have guns, tasers, batons and other debilitating instruments, but you better think twice about abusing your authority, because more and more people are filming the police. May I remind you police officers reading this post, that YOU are PUBLIC SERVANTS, meaning you’re supposed to work FOR the people, not for the CORRUPT lawmakers & against the people. It IS okay to question orders you are given by your superiors. USE your conscience and common sense. USE discretion when choosing what “laws” to uphold.

Do you realize that you have become MILITARIZED.. and against your own (American) people at that!? I spent 14 months in Iraq and the way the Police operate here in the U.S is IDENTICAL to how the Military operates (most especially overseas). WAKE UP! and BREAK THE CHAIN OF OBEDIENCE

If you are a cop reading this and are interested in learning more, Check out Any of Sheriff Richard Mack’s Books, and Videos. As well as Law Enforcement Against Prohibition.

Do NOT be afraid to take a stand and set your self apart from the “bad apples”. Police ARE waking up to this message of peace and non-violence, just ask Bradley Jardis, located in New Hampshire.

Feel free to check out my recent speech at an End the Drug War Rally at VCU, on April 20th, 2012, click here.