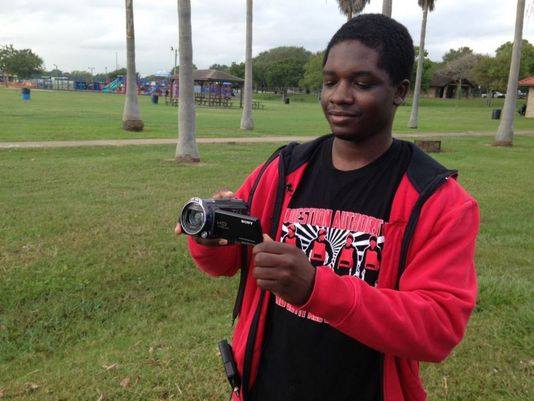 Phillip Turner, also know as Battousai on YouTube and a correspondent for Photography Is NOT a Crime, is well known in the filming police circles. That’s becauseTurner has not only been arrested for merely exercising his first amendment right to record but he’s had a few other interesting encounters with police employees over the years. Two of his more popular encounters would be when he blasted “Fuck the Police” by N.W.A while pulled over (see video below) and the time his dash camera footage lead to an indictment of an officer who searched his car illegally (after illegally arresting Turner).

While Turner has made a few cops look bad by their over reactions or lack of knowledge regarding the law, this past weekend he was helping them look good. While attending the South by Southwest Festival this past weekend Turner was doing what he normally does, filming the police.

Yet, it wasn’t what Turner filmed the police doing, but what he filmed a man doing before he fired two shots into the air, that got him on the news. Turner was monitoring the police on 6th street when a scuffle started to break out. Turner filmed a man who had a gun in his front jacket pocket and shortly thereafter it’s alleged he fired two shots into the air.

The police had initially detained the wrong person but thanks to Turner’s video the right person was taken into custody.

This isn’t the first time CopBlockers (or Cop Watchers) have helped police capture people attempting to harm others either. In May 2015 Kenny Lovett and Kory Watkins witnessed a disgruntled spouse physically abusing a woman that he eventually held at gunpoint as he forced her into a car and sped off. The duo kept an eye on the car as it made its getaway, providing vital information to police who eventually stopped the car and arrested the man.

Both of these cases prove that people who go out and film the police could be of value in many situations. That if the time presents itself and it’s in the best interests of the situation – most commonly those with damaged property or a victim – the video would be provided to hold those without badges responsible for their actions. In fact, the camera is a very powerful tool and without government police costing so much – Chicago paid out $662 million in misconduct suits – private businesses would probably use that money to install camera systems. Providing transparency, accountability and responsibility all at the same time. Which would help identify those who harm others or their property, just like Turner’s video kept an innocent man out of custody and the right man in it

Of course if the police weren’t government operated and funded by taxation (click here for best tax tip ever) there would be a more harmonious relationship between those who record and those who catch people who initiate force on others. Instead there’s an unnecessary tension that exists as if those who record the police are merely paparazzi with no real value to the situations at hand. I’m glad Turner was able to prove that as a fallacy here.

Related at CopBlock.org about Phillip Turner below.