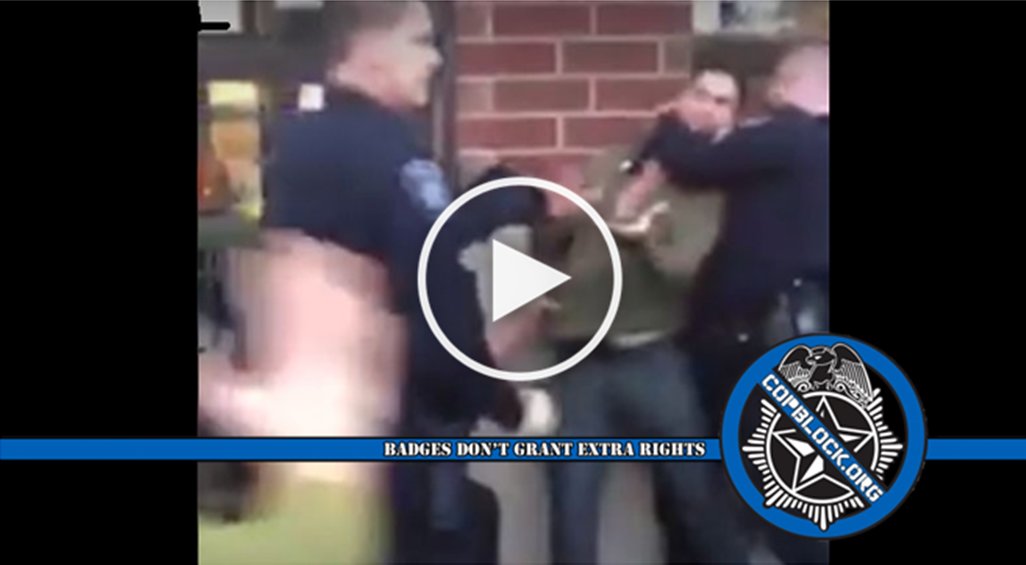 Video has emerged showing a man being aggressively arrested in front of a Michigan pub on St. Patrick’s Day by Royal Oak police officers.

The footage, originally posted on Facebook by a man named Steven Ba, shows a gang of rabid cops screaming and yelling as they pull the unidentified 25-year-old in different directions.

The man is seen looking dumfounded before the officers push him up against a wall and put him in a headlock. He stands with his hands out while his legs are picked up off the ground and he is taken down and tased.

Angry onlookers are seen surrounding the area in protest outside of Blackfinn Ameripub on Main St. as one officer then puts his knee in the man’s back while others handcuff him.

“A good friend of mine went to Royal Oak to celebrate St. Patrick’s Day and then was met by the pigs with badges,” Steven Ba said. “He did not resist at all! And this is the way they treated him!”

According to police, the man was accused of fighting inside the pub and was charged with disorderly conduct, resisting arrest, and possession of marijuana.

In the video, officers can be seen telling observers to “get back” and “back up” as they attempt to document the arrest. One onlooker was reportedly also charged in the incident for “interfering.”

Police say an internal investigation into the matter has been launched but added, “at this point… there doesn’t appear to be any misconduct by officers.”

“This individual was observed fighting with other patrons in the bar,” Lt. Dave Clemens said. “It was a very chaotic situation. [Officers] did the best they could under those conditions to take this person into custody.”

Viewers on social media, as well as witnesses from the scene, have accused the cops of using excessive force on a man that wasn’t resisting.

One witness said the man observed a patron inside the pub hit a woman and began arguing with him before bouncers intervened and threw him out. He was then met by officers outside.

According to reports, the man was released from custody after being booked and treated for minor injuries at Beaumont Hospital.

Royal Oak Mayor James Ellison said that the video does not show “what happened before and what happened after,” and has asked the public to withhold judgment until all the facts come out.

He said he expects the internal investigation to be completed by next week.