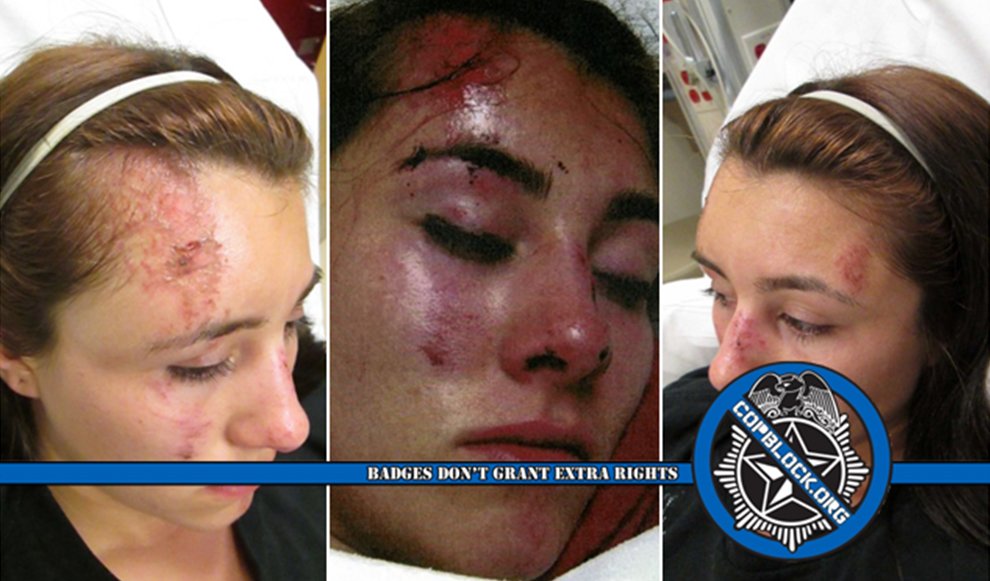 A young woman that filed a federal lawsuit against Sonoma County, California after a sheriff’s deputy choked her and ground her face in gravel, says prosecutors filed charges against her in retaliation.

Gabrielle Lemos, 19, was celebrating her graduation from Petaluma High School at her family’s home on June 13 when deputy Marcus Holton responded to the scene to investigate a possible domestic violence situation involving her sister.

According to the lawsuit, Lemos’ sister was sitting in a truck with her boyfriend when Holton began questioning the man outside the vehicle and then pulled her out of the passenger’s seat without cause.

In response, the suit claims that Lemos ran up, protested the officers actions, and demanded a female officer be present before Holton shoved her backward and told her no one else was coming.

The federal lawsuit says family members tried to calm the situation and told Lemos to go back in the house, but Holton walked up the driveway, grabbed her from behind and put her in a chokehold.

He then picked Lemos up off the ground and threw her face-first onto the driveway, the lawsuit claims – and “put his knee in the back of [her] head and began grinding her face into the gravel.”

“Deputy Holton yelled ‘Stop resisting!’… as blood pooled on the ground under [Lemos’] face… despite her screams and her family’s pleas to stop,” the lawsuit says.

Lemos was then handcuffed and arrested on suspicion of resisting arrest and battery on a peace officer before being transported to a hospital to treat her injuries.

Sonoma County prosecutors declined to charge Lemos in the case following three court appearances, and in September, reportedly told her that charges had been rejected for filing.

On November 13 however – the day after she filed the federal excessive-force lawsuit against the county, Holton, and the sheriffs office – prosecutors charged her with one misdemeanor count of resisting arrest.

The decision is important because Lemos cannot proceed with her civil action while she has a pending charge. Her attorney, Izaak Schwaiger, called the move “unethical” and “a desperation play” made in direct response to the lawsuit.

“There’s no other possible reason,” he said, having now filed a vindictive prosecution claim against the county in Superior Court. “They had to reverse-engineer some justification.”

Sonoma County District Attorney Jill Ravitch said the retaliation allegation is “baseless,” and claimed that her office made the decision to charge Lemos in early October, not after she filed the suit.

Last week, Sonoma County Superior Court Judge Gary Medvigy began hearing arguments in the vindictive prosecution claim and prosecutors tried to derail the hearing by saying “work-product privilege” would be violated if they were forced to testify.

Medvigy said however that he was “going to pierce the privilege” and make them testify under subpoena for why they charged Lemos when they did.

He said the timing of prosecutors’ actions can’t be ignored and scheduled an evidence hearing before a three-judge panel on April 13 – a decision that the district attorney’s office is now appealing.