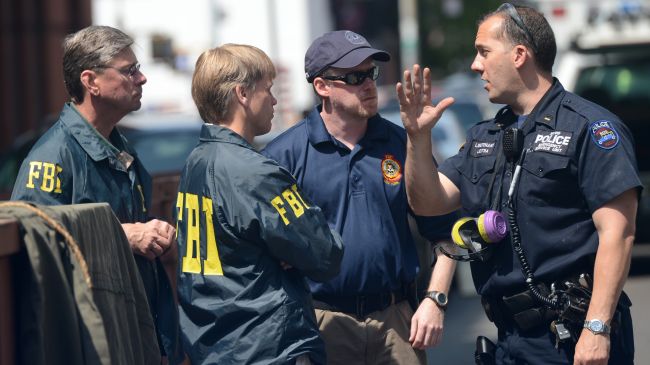 DISCLOSURE: I call Ian Freeman (no relation) and Mark Edge my friends whom I’ve also had business relationships with, particularly, Ian in his capacities with LRN.fm and FreeKeene.com. I also lived with Ian, or at the FTL Studio, for a period of time. Until recently I was also a signer of the Free State Project and have several friends who identify as “Free Staters” – a term given to those who’ve signed the statement of intent.

How do you have the FBI raid someone you deem an enemy? Simply accuse them of possessing child pornography then sit back and watch the FBI raid their home, take their tech gear and leave them in shambles. That could be what happened to a New Hampshire based talk radio host. Here’s how.

Keene, NH is home of the nationally syndicated radio show Free Talk Live (FTL) which is hosted by Ian Freeman and Mark Edge. FTL is a listener based talk radio show that’s tagline is “Talk Radio You Control.” On air the duo is known to talk about anything (and everything) but the show is usually focused on social and/or newsworthy issues; including many controversial ones.

New Hampshire is also home to the Free State Project (FSP) whose goal is to move 20,000 liberty minded folks to the same geographical location and achieve “liberty in our lifetime.” In the past the FSP has promoted itself as a vehicle, like a bus of sorts, to help folks make the decision to move to New Hampshire. Their tentpole events are Liberty Forum and Porcfest which promote aspects of the liberty movement happening within New Hampshire. Via these events word has spread that New Hampshire is the liberty destination for those who want to live free(r).

For over a decade Ian Freeman and his businesses/projects (like FreeKeene.com and Shire Society) have been major promoters, as well as, financial supporters of FSP events. That relationship has been deteriorating for some time but came to an end March 17th (three days before the FBI raid). According to a release by FSP President Matt Phillips:

As one might expect of any group of 20,000+ people, from time to time participants have engaged in controversial behavior or espoused controversial opinions. When a media personality does this, they risk associating their sponsors and business partners with that behavior and opinion. Ian Freeman has recently done so with his statements regarding the age of consent. The Free State Project is building a community of pro-liberty activists in New Hampshire. The FSP’s board of directors has a responsibility to this community to protect and grow the FSP’s ability to achieve this goal. Therefore, effective immediately, the FSP will no longer provide FTL with promotional consideration and has ended the “Mutual Sponsorship” agreement. Furthermore, Ian Freeman is no longer invited to attend FSP-hosted events, including PorcFest and Liberty Forum.

Since Ian Freeman does not believe that the government set age limits (whether for driving, drinking or consensual behavior) magically mean people of those ages are mature or responsible enough to do any of those things they claim to, his association with the FSP – a group trying to ‘live free’ – was terminated.

The exact issue – the age a person can consent to sexual intercourse – was not only taken out of context it became the focal point of a smear campaign. While Ian repeatedly stated that he finds sex with children repulsive that didn’t stop those that wish to see him harmed from spreading flyers around the city of Keene (see image right). Ian addressed the flyer and its claims directly at FreeKeene.com stating:

In another smear campaign against me, local haters have concocted yet another dishonest attack flyer and littered it all over downtown Keene. This unsigned, un-cited flyer accuses me of using my radio show to propagate the opinion that, “children as young or younger than six years old have the right and ability to consent to sexual acts with adults” and further claims that I have said that “children have the right to consent, and parents, the community and the state should not intervene”.

Those are the rumors, now here are the facts: In the video made by a local hater from clips of a discussion on my radio show from years ago, it is a caller who asks if I support sex with a six-year old. To which I say twice that sex with children is reprehensible, but that what people do is none of my business. Somehow that conversation gets spun as me supporting sex with children, which I do not, and never have. Here’s a much more detailed discussion about age of consent that explains why I don’t consider what people do in their homes any of my business.

Despite Ian’s consistency and head on approach to the smear campaign the FTL Studio (also his home) was raided by the FBI with state and local police assisting them. According to the statement release by Mark:

According to the search warrant, the FBI ran an undercover TOR .onion child pornography website from their government servers in Virginia from February to March of 2015. This website was designed to deliver, besides the pictures of abused children, a piece of malware that breaks the anonymity of TOR and identifies the true IP address of the person attempting to access the website. Other information, including the computer host name, username, and MAC address were also supposedly captured by the FBI. Pursuant to an investigation into violation of 18 USC 2252 (child pornography), the FBI seized approximately 46 computer and electronic devices from our studio. No charges have been filed.

The fact that the FBI has run child pornography sites is NOT new information. There was a submission at CopBlock.org posted back in 2013 highlighting this very fact. I published another post on the case the FBI cited above – see here – earlier this year. It is ironic, but it’s no secret that the FBI itself admits to distributing child pornography while also conducting raids on property owners they aren’t even sure visited THEIR SITE (since it only knows the IP, not person). To clarify, the FBI will arrest you for having child pornography they (might have) gave you or suspect they might have gave you (this case is the latter).

Regardless, I don’t buy the FBI’s reasoning in the warrant for the search. Are we supposed to believe that the FSP disassociated with Ian and the very next day a warrant was signed to raid his house over the exact accusations he was ‘banned’ for? I can’t buy that. That’s too much coincidence for me.

I speculate that the FBI took advantage regarding the public knowledge of their involvement in child pornography websites to get the warrant and protect their informants. They are banking on the informant being right and that they’ll find child pornography (or anything to charge Ian with) on the machines and proving their baseless reasons (because someone said or thought so) for the search will never come to light. Or they won’t plant anything on the devices and Ian will be cleared but not before the hit squad has permanently damaged his reputation.

[SIDENOTE: Hurting Ian’s reputation seems to have backfired since many (reportedly 100’s) have asked for refunds to this year’s PorcFest and a GoFundMe to replace what the FBI seized stole exceeded its goal of $5,000 within 24 hours. Of course it too was attacked by those trying to discredit Ian but was promptly reinstated.]

Ian Freeman has continually denounced the initiation of force, for all people including that directed toward children, his enemies have, by merely placing calls to the FBI (or state agents in general), done their best to silence a man who’s been one of the loudest, most consistent, voices of liberty for a long time.

What I’ve learned from this is that if you have an enemy you can have their home raided and property stolen by the FBI. All you have to do is accuse them of possesing child pronography. How cool is that!?!?!?

And if it’s not – get the FBI to lock your enemies up for life – “cool”, it means that the FBI is always lingering in the shadows, waiting for the right time to take down those who are successful at helping people see the violence inherent in the system. To awaken them to think outside the “Mommy and Daddy Government” will fix everything mentality many have today. That scares them and is why the FBI targets people like Ian and Mark. Remember this wouldn’t be the first time the government has locked someone up on fake child pornograhy, or sexual assault, charges simply because they spoke the truth.

LISTEN TO FREE TALK LIVE AS THEY DISCUSS THE RAID THEMSELVES ON AIR: