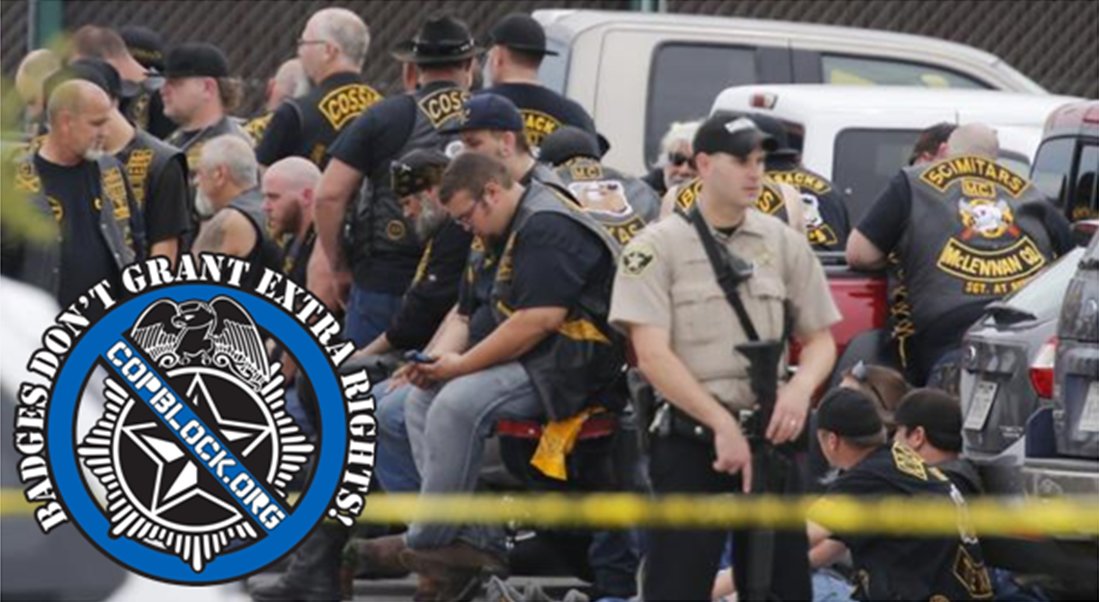 Forty-eight more bikers have been indicted in the May 2015 shooting that left nine people dead and 20 injured at a Twin Peaks restaurant in Waco, Texas.

The indictments bring the total number of bikers facing federal charges in the incident up to 154. More indictments may be forth coming but those already implicated now face 15 years to life in prison.

Prosecutors said Wednesday that all indicted are charged with “engaging in organized criminal activity” – meaning they’re accused of being complicit in the shooting just by virtue of being there.

From the very beginning, the incident has been shrouded in secrecy and conjecture as officials have released almost no information about what transpired.

Police have claimed that after a disturbance in the parking lot, a fight began in the restaurant’s bathroom that quickly escalated into an armed brawl and shootout after one group of bikers showed up uninvited.

The truth of the matter is unclear however, and gag orders have been imposed prohibiting the release of surveillance footage that could shed some light on the incident – like who fired fatal shots.

Most of what can be gleamed comes from the Associated Press, who has reviewed more than 8,800 pages of evidence including police reports, dash-cam videos, photos and audio interviews.

According to the AP, at least four of the nine people killed in the shooting were struck by the same caliber of rifle fired by Waco police officers. The cops only used .223-caliber rifles that day.

Despite the immediate and sweeping characterization by media and police that the gathering was a congregation of violent criminals, the meeting was actually a legitimate and organized group of motorcycle riders meeting to discuss political issues.

This has led many to speculate that the violence was first instigated by police – and was politically motivated or spurned in hopes of ensuring RICO charges against the leaders of the clubs involved.

According to the website of the Texas Confederation of Clubs and Independents – the group that organized the event – the gathering was a scheduled part of the 30th Annual National Coalition of Motorcyclists. Police maintain however, that the event was a gathering of five violent motorcycle gangs who had met at the restaurant to settle differences over turf and recruitment.

“They were not [t]here to drink and eat barbecue,” Waco police Sgt. W. Patrick Swanton has said. “They came here with violence in mind.”

Police claim they received tips about impending violence at the event. The groups in attendance included the Christian Ministries, the Sons of the South, the Cossacks, the Bandidos and the Veterans Club. One of the bikers killed was 68-year-old Jesus Delgado Rodriquez, a purple heart recipient.

Eyewitness reports have painted a different picture of the incident than what has been presented by police. Founder of the Waco chapter of the Sons of the South, and official with the U.S. Defenders Task Force – a legislative group affiliated with the Texas Confederacy of Clubs and Independents – Steve Cochran, said that police gave no indication to him or other attendees that their lives might be in danger.

“The meeting… was to focus on legislative issues common to all bikers, he said. “These meetings have gone on for 20 years, and we’ve gone all these years without a single incident.”

Twin Peaks security footage, shared by the establishment with the Associated Press – who did not release it in its entirety to the public – shows that just one of the dozens of bikers inside the restaurant shootout fired a gun.

The AP said of the nine surveillance video angles released to them, none showed the parking lot, where police claim the incident began after one biker had his foot run over. Instead, the video shows bikers running away from the shooting or ducking under tables, presumably to dodge incoming gunfire from officers outside.

Police and prosecutors have claimed that video footage exists showing Bandidos and Cossacks shooting at one another but the AP has said video it has reviewed doesn’t clearly show who is shooting at whom.

Police have said that minus those killed or injured – out of about 200+ people in attendance at the event – only three were not arrested. Detainees were each given a $1 million bond.

“You don’t throw everyone in jail and sort it all out later,” former Texas judge who represents several of the bikers, Susan Criss said. At the end of June, all but six of the 177 people arrested had been released.

Also, small business owner Matthew Alan Clendennen is suing the city of Waco and McLennan County, claiming in a federal case that he lost income and suffered damage to his reputation because of his wrongful arrest.

In June, District Judge Matt Johnson imposed a gag order in the case prohibiting the release of video surveillance footage from Don Carlos to the public Clendennen believes could exonerate him.

Clendennen said he isn’t a gang member, but belongs to the Scimitars motorcycle club. “We are just guys that like to ride motorcycles and get together,” he said, adding that the group has many charitable causes.

Police have claimed that 430 weapons were recovered from the crime scene, including 151 guns, along with tomahawks, brass knuckles and a machete.

Officers called the incident “a remarkable situation where [Waco authorities] were faced with open gang warfare,” and have also claimed that Waco officers turned their automatic rifle settings off and fired only 12 rounds, while 32 other rounds came from bikers.

In November, McLennan County District Attorney Abel Reyna won indictments against 106 of the bikers. Of the 48 people newly indicted on Wednesday, six have not been arrested, and their indictments remain sealed.

Prosecutors say they are facing the same charge as all others however, and have not indicted anyone specifically for murder in the nine deaths. The catch-all “organized criminal activity” charge stipulates that every person implicated is somehow responsible for the shootout.

Don Tittle, a Dallas attorney that is representing about 15 bikers who have filed or plan to file civil lawsuits against Waco authorities for wrongful prosecution, said Wednesday’s indictments center on bikers who were members of smaller “support clubs.”

“There were people that were tragically killed, and there is no doubt there’s some individuals that should be charged with criminal offenses,” Tittle said. “But the overwhelming majority of the people there that day were nothing more than present at the time that the incident occurred.”