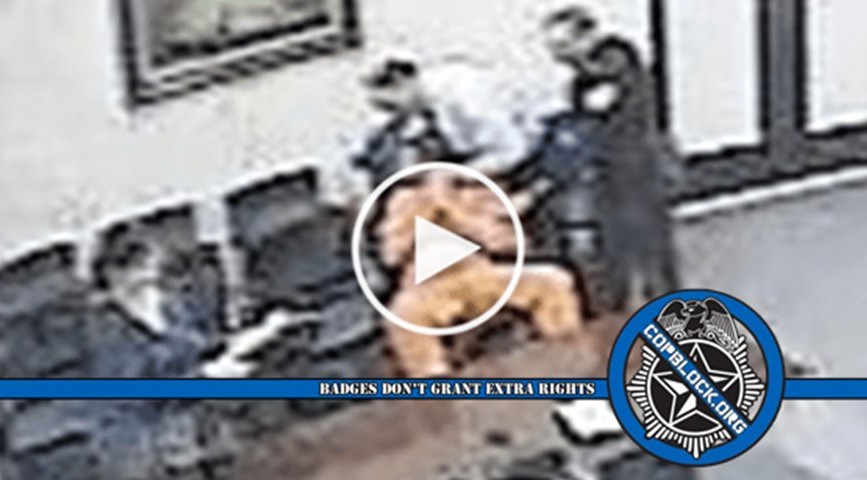 Video was released on Tuesday showing a Clinton County, Ohio bailiff choking a handcuffed and shackled teen before dragging him out of a juvenile court room earlier this month.

According to state police, the 17-year-old defendant allegedly stole a car with two other juveniles on March 4 and led troopers on a chase before the car crashed into a Rombach Avenue apartment building in the Columbus area.

The footage shows the teen shift to stand up after the magistrate dismisses court. Bailiff Jim Buckner is then seen placing his hand on the back of his neck to push him back down in his seat.

Buckner walks toward the bench before turning back and staring the teen down. There was no audio on the footage but there appeared to be an exchange of words between the two.

The video then shows Buckner begin assaulting the teen by putting him in a headlock and wrenching his neck around before pulling him to the floor and dragging him out of the courtroom.

Clinton County Chief Public Defender Robert Baker, who is representing the defendant, said his client had simply told Buckner not to put his hands on him – which prompted the attack.

“The kid, he’s a 17-year-old kid. He’s not like a small, little kid but he’s cuffed, he can’t move, he doesn’t pose a threat to anybody other than verbally being a smart alec,” Baker said. “To see someone take advantage of a kid in that situation and physically, forcibly take the actions Mr. Buckner took, and throw him to the ground out of a chair I was shocked…”

An Ohio Attorney General spokesperson said that a probe into the incident has been launched by the Ohio Bureau of Criminal Investigation, who will determine whether or not to press charges against Buckner.

“It’s pretty clear that he did something, whether it amounts to a crime or not, he did something that was out of line,” Baker said. “At the very least, I would have expected him to be placed into an administrative leave kind of thing while he was being investigated. Whatever the result is, I hope justice is done.”