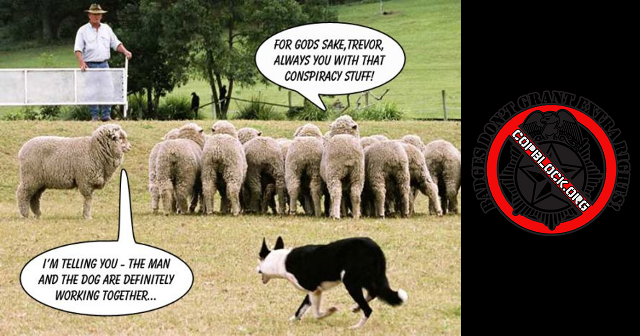 One of those tireless cliches that we hear repeatedly from the disgruntled bootlicks whose hearts are filled with rage and envy at our disobedience to our mutual captors is that we and/or our supporters are sheep/sheeple. Besides being a tired analogy that has been made meaningless from overuse, the claim flies in the face of reason and semantics.

The comparison of individuals and groups to sheep was originally intended to illustrate how people sometimes think and act like those animals. So how does a sheep act? Sheep are herd animals. They are frightened skittish animals whose groupthink behavior causes them to follow the majority beyond any other reason than that they are the majority. So how does that relate to us and our supporters in comparison to compulsive cop supporters?

The majority of people in our society fully support the police. Police supporters constitute the majority segment of our population. Therefore those that stray from that path are not acting very sheep-like. Whereas the mindless syCOPhants who follow the herd of authoritarian obedience more closely resemble the qualities of sheep behavior. I am never sure if the people misusing this term are really just that ignorant, or if they fancy they are part of some exclusive minority or crusaders with righteous purpose. Say what you will about the instincts of actual sheep, but those are just instincts. They don’t try to justify their behavior with misguided claims of rarity and righteousness.

Frightened and skittish? Who does that sound more like, those who stand against the masses and authoritarians, despite the dangers of doing so, out of principled convictions or those who cling desperately to their delusions of ever-present dangers that necessitate overzealous and overbearing guardians? The neurotic attachment to public policing has no justification but fear. While you call us sheep you lay prostrate and obedient to wolves masquerading as protectors. Only sheep are so blindly enamored of their own beings that they would fail to recognize a danger that flattered them by praising them for their obedience.

Calling us and our supporters sheep does not make any sense. It is a misplaced metaphor that bears far more resemblance to its accusers than their targets. Yet I would hesitate to call our opponents and accusers sheep. As I stated before, sheep are exercising their instincts. They have not been intentionally conditioned to be docile, apathetic and delusional. Unfortunately, those who demonstrate blind obedience to their handlers have been conditioned to betray their own nature to exercise their freedoms and liberties unhindered by bureaucratic apparatuses. They are victims of a narrative that places them in cages of fear and obedience. I can forgive them for falling prey to these monolithic forces of ideological oppression and becoming traitors, while it is doubtful that they will ever be grateful that we were trying to break the bondage of every individual human being, including them.

Sometimes you just can’t win. You try to open a persons cage and they snap at your fingers while you do so. I just remind myself often that I love what I do and even the most disheartening encounters with the Stockholm Syndrome SyCOPhants doesn’t seem so baa-a-a-ad.