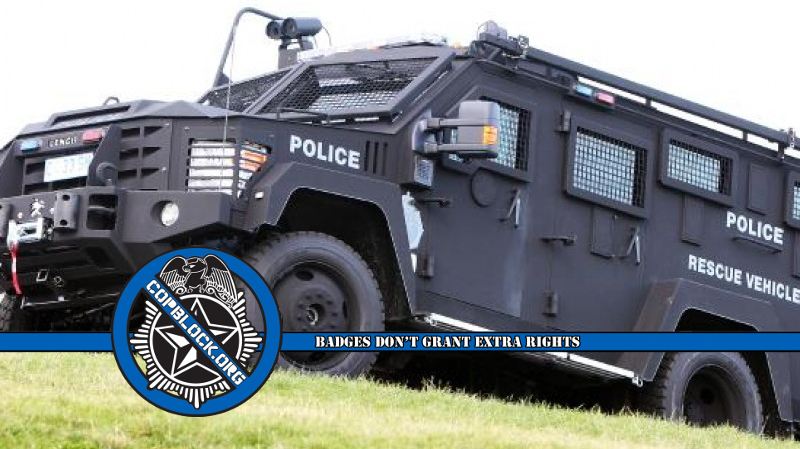 In Stamford they’re a little jealous of the other Connecticut cities that have the latest fancy new military vehicles. According to the Stamford Police Foundation their city is the fourth largest in Connecticut and all three of the larger cities each have two BearCats. However, for some reason Stamford hasn’t been able to acquire even one of the paramilitary assault vehicles via the typical taxpayer funded methods.

So now the Stamford Police Department, by way of the Stamford Police Foundation, wants to appeal to a nation of Cop Suckers to buy them that $200,000 death machine. Stamford is one of the safest cities in the country (and the safest city in Connecticut “by a wide margin,” according to FBI statistics) with a consistent decline in crime rates over the past several decades. In fact in all of 2013 they had one single murder take place in Stamford. (That might be a hint as to why they haven’t been able to convince Uncle Sucker to buy them that Militarized Police Tank yet.)

In spite of that actual reality, the Stamford police states that a BearCat is a vital tool it needs to combat the imaginary increase in the frequency and severity of critical incidents that they are pretending is happening. Like other tiny, low population cities with minuscule crime rates (such as Keene, New Hampshire) it’s obviously pretty essential that they get one of these “rescue vehicles” that they can stand on to pull kitties out of trees. And to be fair, it’s embarrassing for them to show up to one of those joint department training thingies all dressed up like John Wayne heading to a beach on Iwo Jima, but driving a regular old patrol car. It just doesn’t give the full effect that today’s militarized police forces are looking to project to the communities they have committed to terrorizing and oppressing. Rumors (that I started) have even claimed that they have been forced to have Chief Fontneau drop them off a block away and walk to avoid being laughed at by all the other Stormtroopers with their fancy armored clown cars.

Unfortunately, they’ve only raised around $24,000 in the two months since they started their online bake sale and 20k of that actually was funneled into the donations through the Stamford Police Foundation itself. So they’re actually pretty lacking in people willing to fund their own oppression. That’s a damn shame.

Of course, they’ve got that $600,000 grant they received last year to buy body cameras, which they haven’t actually done, burning a hole in their pocket. So there’s always hope that they can drum up some more petty cash off the backs of taxpayers for stuff they don’t actually need. (Obviously they’ll get much more use out of a BearCat than they will body cameras, though.)