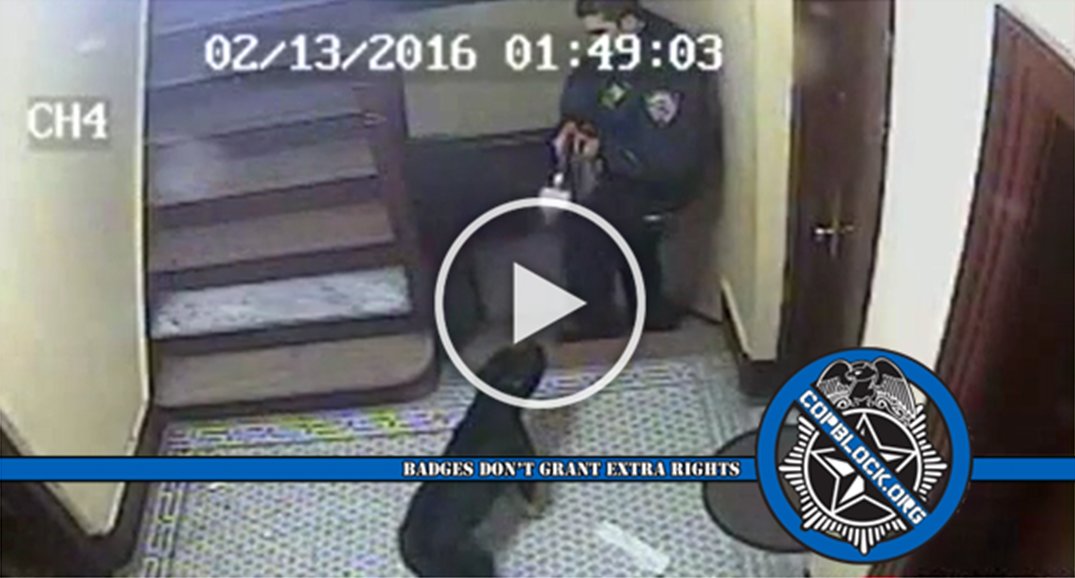 Video emerged on Thursday showing an NYPD officer shoot a dog in the head inside a Bronx apartment building after it trotted toward him wagging its tail.

Yvonne Rosado said she was inside her home dancing with her four-year-old canine named Spike on February 13, when officers from the 46th Precinct were responding to a domestic violence call at a neighboring apartment.

The call involved a 16-year-old girl whose boyfriend was attempting to violate an order of protection by trying to come inside. By the time the cops arrived however, the young man was gone.

According to Rosado, the dog had started barking when the cops arrived at the E. 183rd St. building, so she opened her door to see what was going on outside.

Surveillance footage shows Spike slip out the door and into a stairwell where officers were standing and speaking with the neighbors about the unrelated incident they had been called for.

One of the cops, identified as Ruben Cuesta, is then seen immediately drawing his firearm as the dog exits and playfully looks around while wagging its tail.

The officer backs away down some stairs as the animal makes its way toward him and fires a single shot, fatally striking Spike in the head.

The footage then shows Rosado’s outraged neighbors and family members consoling the dying animal as one of them rushes down the stairs in attempt to slap the officer – who pushes her back up the stairs and other cops pile on top of her.

“The officer just reacted badly,” Rosado said. “I was screaming, ‘He’s friendly! He’s friendly!’ But he still did that to my dog. Spike died wagging his tail.”

Rosado said police didn’t apologize for the shooting and that she has already filed a notice of claim for a possible lawsuit against the city. She claims NYPD officers also killed her legless pet cat about six years ago during a similar apartment incident.

NYPD policy states that cops can only shoot at animals “to defend themselves or others from threat of physical injury, or death,” and “as a last resort to stop an animal attack.”

A police spokesperson did not say if Cuesta was carrying a new version of pepper-spray that the department is now implementing which is supposed to be effective on dogs and may have been deployed instead of the gunshot.

The spokesperson did assert however, that an investigation into the incident will be reviewed by the NYPD’s Force Investigation Division, who will then forward their findings to a firearms discharge review board.

“It’s like a tearing inside that I feel every day when I open that door and I see that in my head, him just lying there twitching,” Rosado said. “I want the officer to be disciplined for what he did to my beloved because he tore away something, a family member.”