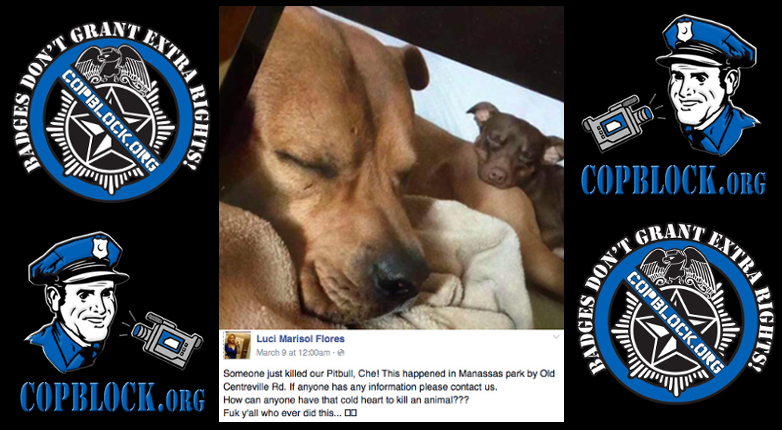 The content below was originally posted at Photography Is Not A Crime! (PINAC) by Ben Keller. It discusses the arrest of Virginia State Police Trooper Christopher D. Campbell, who apparently loves killing innocent dogs so much that he even does it during his off time.

Unfortunately for him though, the fact he wasn’t wearing his magic suit at the time and fled the scene of the crime led to a manhunt for the (at the time) unknown killer of a family’s pet by the Manassas police, including the offer of a $1,000 reward for information about the identity of the “cold-hearted” killer.

Once that was all in motion, it was too late for his shiny badge to save him from having charges filed against him after he was tracked down. Now he’ll have to wait until his court date on May 5th to fear for his life and have the charges thrown out or receive a really light slap on the wrist in return for his “service” to the community.

An off-duty Virginia State Trooper was charged with animal cruelty and discharging a firearm in a public place, only after police issued a reward for information leading to the arrest of the suspect responsible for the fatal shooting of a pit bull.

Virginia trooper Christopher Daniel Campbell was charged in the puppycide, which the owner described as ‘cold hearted.’

When the city cops arrived, they found a brown pitbull, injured from the gunshot, but the dog was still alive.

The dog Che, was then taken to the animal hospital, where he later died from the wound inflicted by Trooper Campbell.

PINAC was unable to reach the owner of the dog, Che, Luci Marisol Flores. But we located her Facebook page where she posted about the incident on March, 9th, the day it occurred, saying:

Someone just killed our Pitbull, Che! This happened in Manassas Park by Old Centreville Rd. If anyone has any information please contact us. How can anyone have that cold heart to kill an animal???

Fuk y’all whoever did this…

Flores later posted that the most difficult thing to do was inform her children about the death of Che, “The kids loved him so much, we all did.”

PINAC learned that information given by Campbell’s own department, Virginia State Police, led ultimately to Manassas police making the blue on blue arrest.

“As soon as we were made aware of the alleged incident, our supervisors notified the Manassa Park Police Department. We shared information with them and they proceeded with their investigation. They have their own criminal investigation because it’s their incident. We are simply cooperating with them in any way we can. But Virginia State Police have initiated an internal investigation [on Campbell].”

She also told insidenova.com, “We have no idea why it happened. We are still in shock that someone like him who is supposed to protect our community would commit such a cruel crime against a dog.”

Spokeswoman Geller did not comment about specific information that led to Trooper Campbell’s arrest, citing a Virginia State law states that arrest reports can be held until after a criminal case is over.

As you can see in the cover photo, an unidentified Virginia trooper is rescuing a dog, and it is now apparent that it’s not just for PR purposes, but from an agency that is demonstrating the kind of respect for life citizens demand of public servants.

Kudos to the Virginia State Police for doing the right thing, and bringing justice to one of their officers for breaking the law.

Normally, police are rarely criminally charged for shooting dogs, and hardly ever while on the job, because most departments actually train officers to shoot dogs they think could be a threat.

As we recently reported in PINAC News, West Virginia woman Tiffany Hupp was recently acquitted of obstruction charges, for standing between her dog and a state police officer who wanted to kill it.

In this case, Trooper Campbell was off-duty and running from the scene, which seems bizarre.

If he had a good reason to shoot Che, one would think there would be no reason to run.

Manassas Police did not a release any statement indicating motive for the crime, but said they identified Campbell as the shooter only after they received information from state police.

According to manassasparkpolice.com, the department had issued a reward of $1,000 for information leading to the arrest of the suspect.

We reached out to Manassas Park Police too, but they were not able to comment about the details of their investigation.

Apparently, the only way police are arrested is when they’re off-duty.

And this case is unique because it involved an investigation by another department before his own department shared information with investigators that led to his arrest.

Campbell has been placed on unpaid leave until after the criminal matters is resolved.

He is scheduled to appear in court on May, 5th.