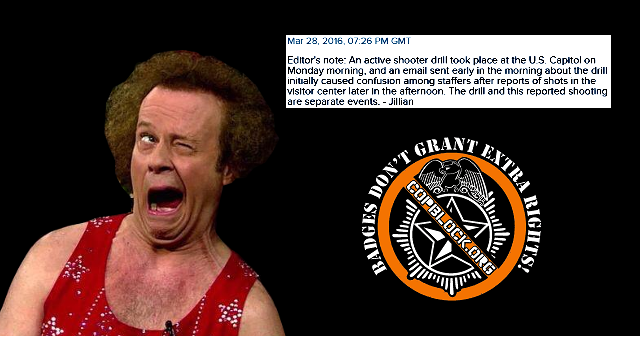 There has been news of a shooting at the US Capitol Complex Visitors Center in Washington, DC. There are conflicting reports about whether or not a responding officer was shot and injured, or whether the shooter was shot and injured. What is clear is that, once again, an alleged act of mayhem has followed right on the heels of an active drill of the exact scenario at the same time and place as the drill. This is not the first such public tragedy that followed on the heels of a practice scenario of similar or same situations at the prospective geographical and temporal localities.

When a police officer is shot it is generally reported directly to the media ASAP so as to pump up the hero narrative, so the supposed confusion about the events seems less like an accidental omission or lack of information, and more like a conscious attempt to create a smokescreen for the coming deceptions.

At this time there is no further evidence to go on, and given the history of police, government and media, there probably never will be any substantial evidence. When all the lines you are fed is lies, you have to learn to read between them.