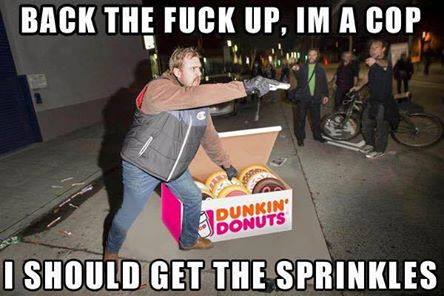 A Southeastern Pennsylvania Transportation Authority police officer was convicted by a Philadelphia jury on Monday for a Christmas 2013 incident involving the assault and false arrest of a woman that started while she was waiting in line at Dunkin’ Donuts.

Muibat Williamson claimed that officer Douglas Ioven, 44, cut in line, stepped on her foot, and then banged her head into an ATM while trying to apprehend her after she asked him to apologize for his rude behavior.

Williamson, 54, testified that she was waiting for a train after she finished the night-shift as a nurse at Einstein Medical Center and Thomas Jefferson University Hospital when she got a hankering for some coffee.

She said Ioven cut in line at the Dunkin’ Donuts at the suburban transit station concourse and then stepped on her foot as he was leaving before she confronted him for and demanded an apology that he refused to give.

A witness said in Common Pleas Court that she got between the two as they were arguing and reminded them that it was Christmas, when she heard Ioven vindictively tell Williamson, “next time, move out of the way.”

According to Williamson, she knocked on the door of SEPTA’s concourse police station to file a complaint and Ioven chased and cursed at her before banging her head against an ATM machine, putting her in handcuffs, and charging her with disorderly conduct.

They acquitted him of simple assault and obstruction of administration of law – a charge that had originally been filed against the officer for preventing Williamson from filing the complaint against him.

Ioven’s defense attorney, Joseph Silvestro Jr., said he was “disappointed with the verdict,” and claimed in closing arguments that Williamson exaggerated her story in order to improve her chances of winning a civil lawsuit she filed against Ioven and SEPTA.

He said video from inside the Dunkin’ Donuts does not prove Ioven stepped on Williamson’s foot, but Assistant District Attorney Andrew Wellbrock argued that when the transit cop said, “next time, move out of the way” – it didn’t sound like someone that hadn’t done anything wrong.

In addition, a retired SEPTA police sergeant told the jury that following the incident, Ioven admitted guilt by saying, “I think I screwed up because I thought she was a homeless person, but she was a regular person.”

Ioven remains free on $3,000 bail and is scheduled for sentencing on May 13. He faces up to four years in prison but Wellbrock said that state guidelines recommend he only receive probation.