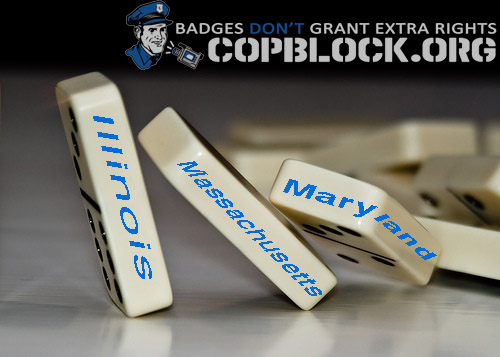 Last week a judge for the 7th Circuit Court of Appeals in Chicago said that eavesdropping legislation, long used by police and their allies to target those who attempted to document their actions, “likely violates” the First Amendment and ordered that authorities be banned from enforcing it.

As Harvey Grossman, legal director of the ACLU noted:

In order to make the rights of free expression and petition effective, individuals and organizations must be able to freely gather and record information about the conduct of government and their agents – especially the police This ruling couldn’t be more-timely, considering the upcoming NATO summit in Chicago and the recent passing of Chris Drew, who, along with Michael Allison and Tiawanda Moore, was among the most vocal of individuals pushing back against the unjust legislation.

That doesn’t mean those who film police in Illinois (ranked one of the least-free states) will be free from harassment – as readers of CopBlock know it’s not uncommon for someone wearing a badge to levy ridiculous threats on another person in an attempt to deter them from pointing-out claimed double-standards. But the ruling does mean that the implicit threat of being caged for years simply for filming no longer exists. And that’s a step in the right direction.

The ruling in Illinois is part of a larger trend is toward greater transparency.

Massachussets
In August of 2011 the 1st Circuit Court of Appeals overturned draconian wiretapping legislation that had targeted people like Simon Glik and myself and colleague Ademo Freeman. That ruling essentially communicated that public officials (including police) have no expectation of privacy in the course of their duties.

Maryland
In September of 2010 a judge threw-out a felony wiretapping charge against Anthony Graber, noting thatrecording public events is protected under the First Amendment. Graber had been targeted after posting to YouTube a video of his interaction with Maryland State Police employee Joseph D. Uhler.

For more, check out CopBlock’s War on Cameras Map & the related links above