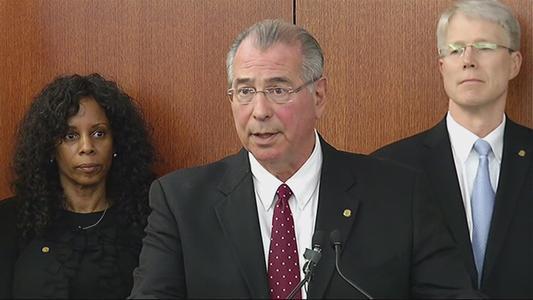 Jamar Clark was shot and killed by Dustin Schwarze, a Minneapolis police employee, last November after an incident with his Girlfriend bought the Police and EMTs. After months of parading the usual catchphrases around Mike Freeman, the Hennepin County Attorney, announced that Schwarze will NOT face criminal prosecution.

This announcement comes exactly two weeks after Freeman was praised by many for eliminating grand juries from the process of criminally charging killer cops. I blogged then that while people praised Freeman for taking such ‘innovative’ steps the truth of the matter is prosecuting cops is always in the prosecutor’s hands. Removing the grand juries just took some of the smoke out of a processed filled with smoke and mirrors. Sadly, it seems I was right.

According to CBS Minnesota:

Hennepin County Attorney Mike Freeman announced two Minneapolis Police Officers will not be charged in the death of Jamar Clark.

Officer Dustin Schwarze shot the 24-year-old last November in North Minneapolis. He was shot in the head on Plymouth Avenue North just before 1 a.m. on Nov. 15, 2015.

In announcing his decision, Freeman also shared a number of videos previously unreleased to the public. They show a citizen’s view of the aftermath at the scene, as well as a series of videos from a camera affixed to the back of the ambulance that initially arrived at the scene that evening.

Here are the videos shared by the Hennepin County Attorney’s Office:

The first video released is from a civilian at the scene shortly after Clark is shot by police. The video is pixelated and it’s difficult to see exactly what is transpiring, but there is a commotion in the area. One person is heard yelling, “He didn’t have to do that!” in reference to the officers shooting Clark.

The second video shows Clark on a stretcher being placed into an ambulance after the shooting.

The third video shows Clark’s girlfriend on a stretcher being placed into an ambulance. Clark is also nearby while she is on the stretcher. She is placed into the ambulance and Clark looks on in the background. The officers on scene are also speaking with Clark, who is just off the camera.

The fourth video shows Clark approaching the rear of the ambulance and standing there for several minutes. There isn’t an audible conversation.

The fifth video shows a deputy EMT at the scene from the rear of the ambulance.

The sixth video shows Minneapolis officers at the rear of the ambulance. Clark is off to the side. They are attempting to take him into custody. An officer grabs Clark from behind and seconds later, the officer is seen on the ground kicking and in a struggle on his back. The officer then adjusts his belt and stands up.

None of the video footage provided seems to be conclusive in any regard. It should also be noted, as it’s been mentioned in other reports, that Freeman never addressed why Clark was grabbed from behind in the first place. When asked about it from the NAACP president, Nekima Levy-Pounds, Freeman responded by saying, “anyone can access the evidence online.”

Yeah, the evidence you’ve provided. And we also shouldn’t forget that both of these officers failed to activate their dash and/or body cameras during this incident. So while there are no criminal charges for murder, in typical police officer fashion, there’s also no discussion about failing to follow procedures or reprimanding for failing to use their cameras.

Clearly something happened here and the police aren’t even able to own it, learn from it and improve their profession. Instead the people of Minnesota were jerked around while the only conclusion that was ever going to come out of this was finally stated publicly.

This is why people must continue to pick up cameras, point them at police officers and show the world that there’s a better way to provide protection than via that of the government.