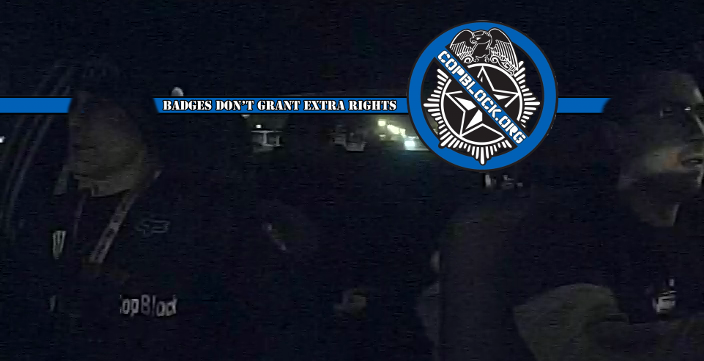 This post was originally published by Ethan Glover at the website of NH Regional CopBlock under the title “The Reality of CopBlock.” If you are in the New Hampshire area or just want to see what the folks out there are up to, you can connect with them via their Facebook page, YouTube channel, Twitter stream, or Google Plus profile. And, of course, you can also contact them at their website.

If you are already part of the CopBlock Network and have something you’d like to share, you can use the CopBlock.org submission page to send us content you created personally or that was created by your own local group. However, if you don’t have a local group in your area already, you can get tips on how to start a group within our resource section. In addition, if you want to get started Cop Blocking, you can find tips and advice for filming the police there also. Obviously, you should always make sure you know your rights and have a good camera (or five) on hand first.

The Reality of CopBlock

What you see online here and on CopBlock related sites doesn’t tell the whole story. Most of what we record, the vast majority, never gets published. Not because we’ve got something to hide. But because to a larger audience, it’s not interesting. Casual conversations with officers and passersby aren’t good material. Part of copblocking is going out and looking for trouble. Not looking to get into trouble, but finding people having issues with police. The reality is, these things are hard to find. With the best police scanner and a lot of cruising around hotspots, we just can’t find it all. We went home an hour before the studios of FreeTalkLive were raided. We failed to be there. If we missed an event like that, how much else have we missed?

No tool in the world; scanners, Waze, Cell 411, police reports, etc., can get rid of the fact that at the end of the day, our searching is just guesswork. But that doesn’t mean nothing is happening when we don’t have something interesting to record. In Jaffrey, the police refuse to talk to us or sit anywhere near us for fear of incrimination. With presence alone we can stop them from trolling hotspots. People coming out of bars would otherwise be tailgated with bright lights in their mirrors until they “swerve a bit” only to be harassed about “how much they had to drink tonight.”

Sure, cops have a job to do. But like copblockers, the public doesn’t see, nor understand what they’re day to day is really like. Profiling innocents, writing victimless tickets for revenue, harassing and bullying the public into incrimination. This is normal for them, and it’s never something they’re willing to do on camera. As much as they try to justify what they do, cops do have a conscience. The job tears good people apart. And when they’re doing wrong, they know they’re doing wrong. That’s why they hide from cameras and the public, it’s why they’re attitudes flip like a switch when someone with a camera arrives. The violent YouTube videos you see of police beating up innocent people and shooting their dogs aren’t just examples of “bad apples.” It’s standard training out of control and caught on camera. That attitude, the us vs. them, combat mentality is what they’re trained for.

It doesn’t really matter what your perception of CopBlock is. A troll or someone who simply misunderstands isn’t bothersome or just isn’t worth the time. Words on the internet don’t hold a candle to the reality we see very clearly in the real world. We can’t capture it all, and can’t capture it often. But then again, we’re not here for your entertainment. We’re here to help innocents caught in the crossfire of bad policing; as often as we can.