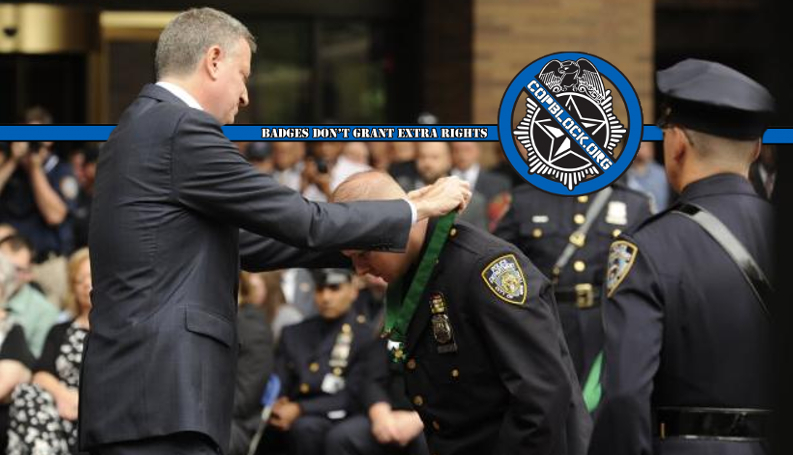 Within hours of the ceremony in which he received an award for bravery, NYPD Officer Officer Eugene Donnelly got blackout drunk and broke into a woman’s house, then assaulted her multiple times and drank milk from her refrigerator before “scampering off.” It’s not actually clear from the report if Officer Donnelly was wearing the Police Combat Cross that New York Mayor Bill de Blasio had awarded him earlier in the day, but apparently at the time of the assault he had stripped down to just a pair of black boxer shorts.

In an interesting (and by “interesting,” I mean laughably ridiculous) defense, Ofc. Donnelly’s lawyer claimed earlier this week that he wasn’t actually drunk, but instead was sleepwalking when he forced his way into the woman’s house and repeatedly punched her in the head. Michael Marinaccio maintains that his client suffers from PTSD and sleep disorders that, conveniently enough, stem from the shooting for which he was given the award for that day. It’s also fairly possible that this was just an attempt by Marinaccio to get started on the annual April Fools Day tradition a few days early.

According to the New York Daily News:

“Our report shows that it wasn’t an alcoholic blackout. It was sleepwalking,” lawyer Michael Marinaccio said after Officer Eugene Donnelly appeared in Bronx Supreme Court, where he faces misdemeanor assault and burglary charges.

Prosecutors say a drunken Donnelly, 27, roughed up his victim after barging into her Woodlawn apartment in June 2014 wearing only his underwear.

The alleged attack took place hours after Mayor de Blasio presented the officer with the Police Combat Cross, the NYPD’s second-highest honor, for his bravery in arresting a teen gunman after a wild Bronx gunfight in May 2012.

“On the best day of this guy’s life, he does something so out of character,” the lawyer said.

“Can we at least consider the possibility that something else is going on here?”

“It took them over a year to come up with this defense,” the 32-year-old told the Daily News. “It’s ridiculous. He’s grasping at straws.”

The woman told police that the officer, clad in black boxer shorts, pounced on her and punched her up to 20 times.

He then allegedly wandered into her kitchen and gulped down milk from her refrigerator before scampering off.

Marinaccio said a doctor has diagnosed the cop with post-traumatic stress disorder and various sleep disorders, dating back to the 2012 shooting.

Prosecutors have found their own doctors and plan to test Donnelly and his alleged sleepwalking in the coming weeks.

In a 2014 interview with prosecutors, Donnelly said he didn’t initially report the incident because he thought it was a dream, court papers show.

Donnelly also admitted that the 2012 shootout led him to fall off the wagon after he achieved sobriety following a long battle with alcoholism.

His lawyer told the Daily News that Donnelly’s sleep issues developed after he was momentarily removed from his command while his superiors investigated the 2012 shoot-out.

“The sleepwalking is just a manifestation of a broader sleep disorder,” Marinaccio said.

It would be easy to make a joke about cops being so accomplished at beating people that they can even do it in their sleep. Additionally, I could point out how uncouth and lacking in basic manners it is to drink milk that other people also intend to drink straight out of the carton. However, I’m going to take the high road here and just say that Officer Donnelly and his lawyer are both full of massive amounts of shit and probably should receive some sort of award for excelling at being bald-faced liars. And point out that Donnelly is a drunken, abusive scumbag, as well.