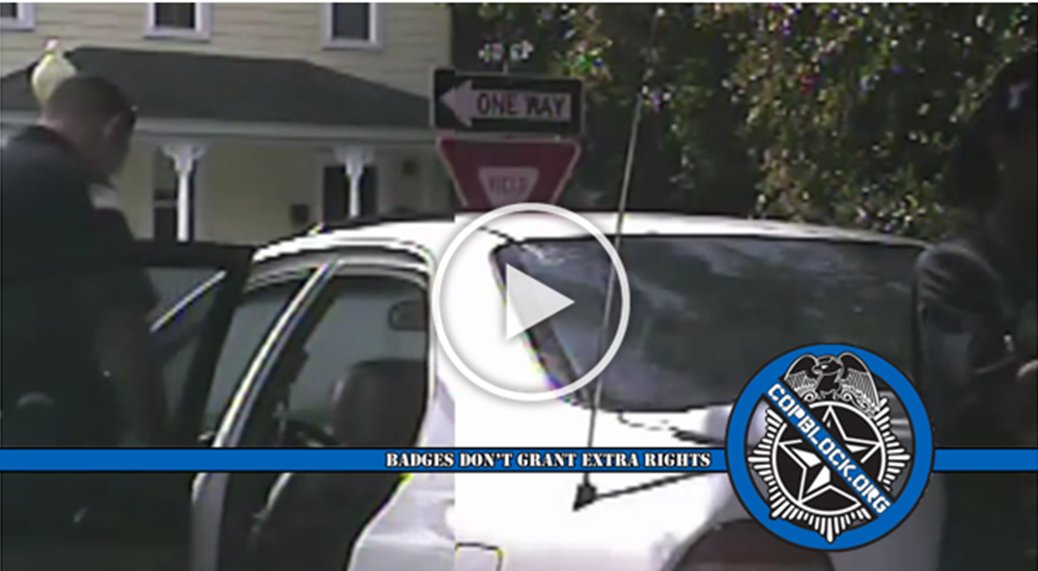 According to the Washington Post, Elijah Pontoon and Lakeye Hicks were pulled over in Aiken, South Carolina on October 2, 2014 in a newly purchased vehicle with temporary tags.

Aiken Department of Public Safety Officer Chris Medlin is heard in the footage telling Hicks he pulled her over because of the paper tags, but SC case law stipulates that having temporary tags in the state is not illegal as long as they haven’t expired.

Medlin tells both Hicks and Pontoon to produce their ID cards, despite the fact that Pontoon was only a passenger and not required to show identification. Most of the interaction occurs off screen but Medlin is heard instructing Pontoon out of the vehicle where he is handcuffed.

The couple’s ID cards are ran and the cops find no issue with the vehicle’s tags before Medlin also instructs Hicks out of the car. He then informs Pontoon, “Because of your history, I’ve got a dog coming in here. Gonna walk a dog around the car.”

According to the Post, Pontoon has a prior criminal history that includes drug charges. Medlin is heard telling him, “You gonna pay for this one boy,” before a K-9 officer arrives on the scene and the car is thoroughly searched.

No contraband is found in the vehicle so the cops then turn their attention to Hicks with Medlin asking a female officer to “search her real good.”

In a federal lawsuit filed against the City of Aiken in September, it is alleged that the officers exposed Hicks’s breasts on the side of the road in direct view of the public and three male officers.

At one point, Pontoon is heard telling one of the officers that he is grabbing his hemorrhoids before Medlin replies, “I’ve had hemorrhoids, and they ain’t that hard.”

The audio suggests that two officers may have inserted fingers into Pontoon’s anus. One of the cops is heard asking, “What are you talking about, right here?” The other officer answers, “Right straight up in there.”

The cops continue to search Pontoon’s ass for another three minutes, finding no contraband. Medlin then tries to justify his actions by telling the man, “Now I know you from before, from when I worked dope. I seen you. That’s why I put a dog on the car.”

The stop ended with Hicks receiving a “courtesy warning” from the officers, but according to the federal lawsuit, there was no indication of what the warning was for. The suit asserts the searches were illegal and invasive.

“This is quite appalling, to say the least,” former president of the National Association of Criminal Defense Lawyers and Fourth Amendment expert, John Wesley Hall said. “There is no legal justification for anything, including the stop because criminal history alone isn’t reasonable suspicion. Everything starting with the stop was unreasonable under the Fourth Amendment, and it just got progressively worse.”

According to Aiken public information officer, Capt. David Turno, the incident has been investigated and Medlin still works for his deparment. It is unclear if he has faced any disciplinary measures.

“The City of Aiken denies the Plaintiffs’ allegations and is vigorously defending this lawsuit,” Turno said. “We will have no further comment about the facts of this case during the pendency of this litigation.”