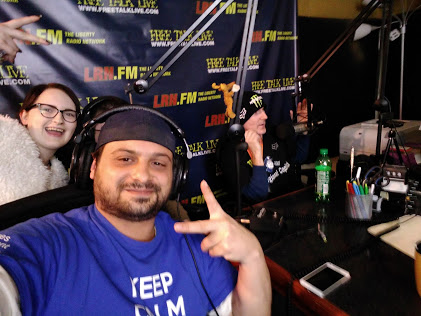 The week is starting off new and we at Cop Blast Podcast will have you covered with the stories you’ll want to hear about. Cop Blast Podcast airs on Monday nights at 9:30 pm with your hosts Ricardo Gonzalez, of Allentown Cop Block, Scott Marshall, of Oath Accountability Project, and Matthew Taylor, of Carbon County Cop Block . Bringing you the Events in their local area as well as stories from around the country.

Host Ricardo Gonzalez took a trip to the Shire this past week. He broadcasted live from LRN.fm as a co-host on Cop Block Radio and met up with New Hampshire Regional Cop Block founders, Jp Freeman and Ethan Glover. Of course they did some cop blocking, New Hampshire Style. They also crashed courtrooms and got pulled over multiple times. These are stories you won’t want to miss hearing more about.

In addition to that we’ll have the sad story out of New York City from this past February when NYPD officer Ruben Cuesta “Feared For his life” and shot Yvonne Rosado’s dog in the stairwell of her apartment building. In the video one can clearly see the dog is wagging it’s tail and posed no threat to the officer. Police have remained pretty tight-lipped about the shooting, but felt the it was necessary to give Rosado a fine of $265 dollars as a burial fee. Hear us go deeper and really get into this and more.

Also, Granite Shoals Police Department decided to put out a fake health bulletin claiming some of  the local  Methamphetamine and Heroine might contain the Ebola Virus. Obviously no one would fall for this, right? Wrong!! Chastity Hopson took the bait hook line a sinker and has ended up with charges.

We are going to talk about this and more on Cop Blast Podcast. See you there!