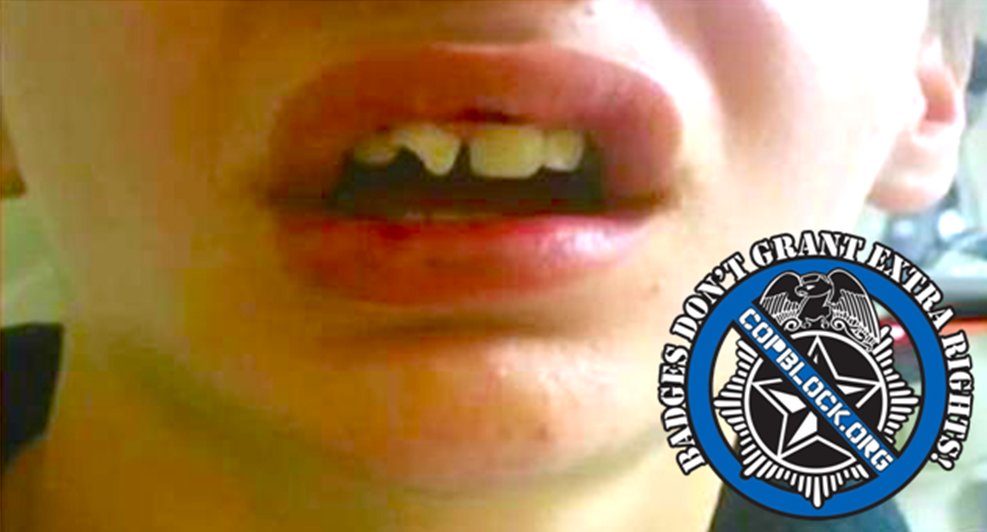 An Idaho woman says a cop with the Idaho Falls police department picked up her 12-year-old son and smashed his face into the trunk of a parked car after she called to report that he was missing.

Amy Olzak says she initially made the call on the morning of March 13 and spent the day with friends searching for the child – before he was finally located and she called police again to indicate that he was safe.

That wasn’t good enough for the cops however, and officers responded to Olzak’s home to investigate. That is when one of them began questioning the boy and the unnecessary assault occurred.

“They came over. I talked to an officer for a minute and he walked over to my son,” Olzak said. “Then he put my son’s hand behind his back and, like, lifted him up in the air and slammed his face into the trunk of a car.”

According to a civil claim filed against the department last week, which accuses the unidentified cop of unnecessary and excessive force, the child sustained broken teeth, a possible concussion, and bruising and trauma to his face and neck.

“There was blood everywhere coming out of his mouth, he was spitting blood, crying, and I called 911 and said that an officer had assaulted my child,” Olzak said. “You heard his teeth hit the trunk and he instantly started screaming and crying saying you knocked out my teeth.”

Multiple witnesses from the scene corroborated Olzak’s story. Courtney Beck, who owned the vehicle the boy was smashed against, said there was “absolutely no reason for” for the brutality. She said afterward, the 12-year-old was handcuffed and placed under arrest.

Jessica Bowles also told the same story and the three women said the child was then taken to a local hospital to receive medical attention where he remained handcuffed until he was returned home.

Idaho Falls police Capt. Royce Clements said that Idaho law allows officers to arrest and detain runaway children and then put them in a detention center or release them to family members. He said the incident is currently under investigation.

“In this particular case it was determined that we did send this to internal affairs and that is ongoing,” Clements said. “Once that investigation is completed, the full results of that come back to the chief of police and as an administrative team, we discuss that and make a determination as if or what sanctions will or need to take place.”

Olzak said she was never notified of any charges against her son, and according to court records, none have been filed. Footage of the incident does not exist as none of the witnesses recorded the encounter and Idaho Falls does not require officers to wear body cameras.