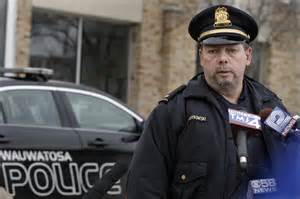 The Wauwatosa Police Department recently re-released their yearly annual online reports following a series of open records requests. Their return to public access, after nearly two years of unexplained obscurity, marks a decisive victory for police transparency. This victory, however, displays the unusually thick veil Tosa PD has erected between itself, those it polices, and everyone in between.

It began with open records requests, filed by CopBlock contributors in the midst of researching a piece on heroin arrest reform. Without the department’s own data, determining the necessity of such reforms gets complicated. Wauwatosa PD released annual reports from 2004-2011, in addition to individual reports provided through Wauwatosa Now.

This all changed in 2012, upon the implementation of a police report redaction policy throughout the Midwest. Stemming from an Illinois court ruling, the policy compelled police to withhold information found on drivers licenses. Despite the challenges associated with the policy many departments, including Milwaukee and Greenfield, continued releasing their annual reports.

In Wauwatosa, not only were they discontinued, but weekly police reports became shorter and even slow to publish. Wauwatosa Now would eventually be forced to post an editorial apology to readers for a lack of police reports, as WPD was literally not providing them. Other policies, specifically those involved with officer interactions with media or journalists, became more restrictive as well.

Whereas Wauwatosa Now’s influx of reports, however stripped down, stabilized, the annual reports never returned. Eventually, and for as of yet unexplained reasons, the remaining reports were removed from the cities web page sometime between 2015 and 2016. Whether or not the department made any effort to inform the public or media that the reports were removed is unclear. Wauwatosa PD essentially went from only providing outdated information on it’s yearly activities to providing none at all.

That’s where CopBlock’s recent 2016 FOIA requests come in, five years after WPD published its last annual report. After confirming Tosa PD “does not have the annual report online” over email, records clerk Sandra Deisinger wrote, “2013 and 2014 reports are available at this time.” Waukesha CopBlock’s Tim Freeman opted to hop the barrier with FOIA requests, which were eventually forwarded to WPD Sgt. Jack Morrison– administrative division.

While Sgt. Morrison informed Freeman that “we have prepared the information that you requested”, he refused to email it. “The Wauwatosa Police Department has not emailed similar requests as yours in the past”, asserted Morrison, “it is not our practice to do so.” Instead, Sgt. Morrison offered Freeman an opportunity to pick up the information packet from the department in person. Additionally, Freeman was asked to pay a $3.50 fee as well as provide a driver’s license to verify the receiver’s identity.

The sergeant’s terms were challenged by Freeman in a follow-up email, wherein he described the issue. “Although you aren’t required to email such records by law, most departments do as it’s less expensive in time and resources for the departments”, as well as for himself. After reasoning that going in to examine an electronic copy may be best Freeman added, “as the location fees to your department were under $50, I’m not required to pay a fee for the location of these records.” Moving to the I.D request Freeman states, “that’s a first for me in hundreds of requests from every imaginable agency in the state [Wisconsin]”. Freeman thereafter cited specific laws which prohibit “your department from denying my request for refusing to identify myself, let alone show my driver’s license.”

Sgt. Jack Morrison’s final email was simple, to the point, yet superbly surprising. “We have added the police department’s annual reports onto our cities web page.” After giving specific instructions on how to navigate the site, Morrison added “2015 annual report has not been completed as of yet.” No time frame has been provided on when the report will be released, CopBlock will likely follow up in this regard.

It’s not the re-release of the 2004-2011 reports that’s intriguing, it’s the 2012, 2013, and 2014 reports. Those, unlike the 2004-2011 annuals, were never released or even acknowledged to exist until now. Even had the department not removed the already released reports from the city’s page, that still left 3-4 years of unaccounted for activity. Many of the issues associated with this practice were explored in the documentary Speak Friend And Enter, which focused on WPD. Since these newly disclosed records appear unrushed and on par with their counterparts, it would be interesting to learn how long they’d been completed.

By returning Wauwatosa PD’s annual reports to public access, CopBlock was able to score a decisive victory for police transparency. In the redaction policies early days, Wisconsin Freedom Of Information Council President Bill Lauder’s warned that it could lead to “secret arrests.” Whether or not it went that far in Tosa, it’s certainly clear that whatever policies were enacted damaged the department’s public transparency.

It’s still unclear, however, how much of what has occurred within the suburb came directly from those policies. When Speak Friend And Enter filmmaker Isiah Holmes described Tosa PD’s redactions to Lauders he replied, “this may or may not be the same phenomenon that stems from the 2012 federal court ruling. There may be other factors coming into play that affect what the department is releasing, and what it’s not releasing.”

Whatever those factors were, FOIA requests were able to champion their chokehold on Tosa’s police reports. Occasionally WPD attempts to tote it’s community connection with events such as pizza with a cop or coffee with a cop. Now, the department can add yet another item to it’s list of transparent facets, if only it told the public the reports are back.