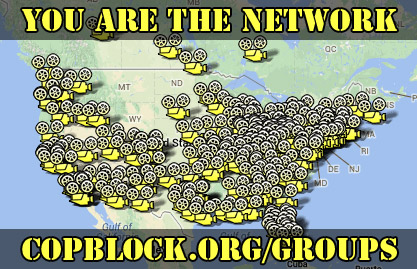 Hello friends. I’m planning to update the Groups page here at CopBlock.org and want to make sure it’s done as thoroughly as possible.

The more robust the Groups page is, the better resource it’ll mean. In plain English that translates into more individuals finding and connecting with others who know that badges don’t grant extra rights. That then builds awareness of ones’ rights, confidence, civil society, and can act as the basis for real alternatives emerging (especially in conjunction with the adoption of say, Cell 411).

So I’m asking your help.

I’m just one person. There’s a lot of content out there and try as I may, I’m bound to overlook a group, even those that are really active. If you’re involved with or aware of a group that should be listed on the Groups page that is not currently included there, please take a moment to put it on my radar by filling out the form below.

In addition to getting active groups added to the Groups page, I plan to identify inactive groups that are currently listed. That way:

Also, as was the case for so many years, I plan to add all known “police accountability” groups, including those oriented as Cop Watch and Peaceful Streets.

This will certainly make the page more of a clearinghouse and not so brand-oriented. You may recall, about a year ago when non-CopBlock named groups were removed from the Groups page. That didn’t make sense to me then, and it still doesn’t, so I plan to rectify it. As I stated at that time,

No matter the stripe, those listed on the Groups page were helping to move things forward in their community. Without question, we’re all better off when it’s easier to find and collaborate with others nearby. The exchange of ideas, empowerment of individuals, building of networks, and voluntary solutions most excited me.

Through the years I’ve heard from a number of folks — including one just a few days ago — that first became involved, or who formed lifelong friendships, based on the connection they forged via the Groups page.

Thanks in advance for your help in making the Groups page an even better resource.