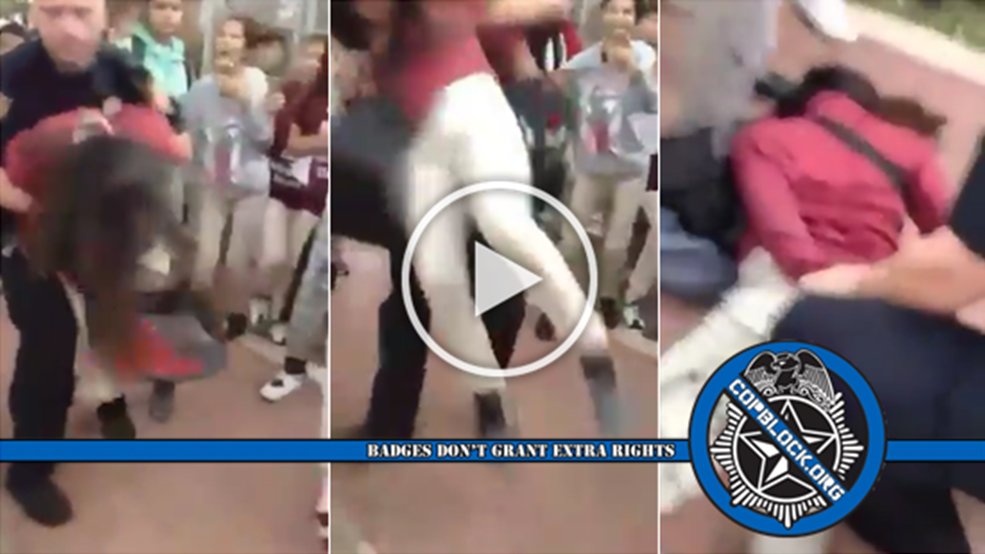 The incident reportedly took place on March 29 at Rhodes Middle-School in San Antonio, Texas after officer Joshua Kehm said the pre-teen was having a confrontation with another student and tried to kick him.

The girl’s mother claims that is not true however, and asserts that her daughter was merely having a normal conversation with a peer when Kehm attacked her unprovoked.

The footage begins by showing the officer bear-hugging the girl from behind as she appears to be struggling to free herself from his grasp.

“Vanessa, chill,” one student can be heard saying before Kehm picks the middle-schooler up off the ground. He is then seen throwing her backwards onto the brick walkway as a crowd of her classmates gasp.

“Vanessa, are you OK?” the student asks as the pre-teen lay motionless on the ground appearing to be knocked unconscious. “She landed on her face.”

The footage shows Kehm then handcuff the girl behind her back and bring her to her feet. Fighting back tears, she is led away by the bully cop.

Gloria Valdez says her daughter is experiencing severe headaches as a result of the take-down and that Kehm, who began working for the school district in Feb. 2015, is a risk to attack again.

Executive director of communication for SAISD, Leslie Price, said the district has launched an investigation into the incident and placed Kehm on indefinite paid leave pending the result.

“It’s very very concerning. We’ve moved quickly to launch a formal investigation both at the police and the administrative level,” Price said. “We need to gather all the details, but also we will not tolerate excessive force in this district.”

Similar incidents involving school cops brutalizing students routinely make rounds on social media. In one of the latest encounters, two Baltimore city schools police officers were criminally charged last month after one of them was filmed repeatedly slapping and then kicking a 16-year-old boy.

The girl’s father, Raul Valdez, condemned Kehm’s actions and said it hurt him to see a grown man doing what he did to his daughter.

“I want to confront the officer, but thought it would be better to do everything legally,” he said. “I want justice for my daughter. These police are getting out of hand. They think they are above the law.”