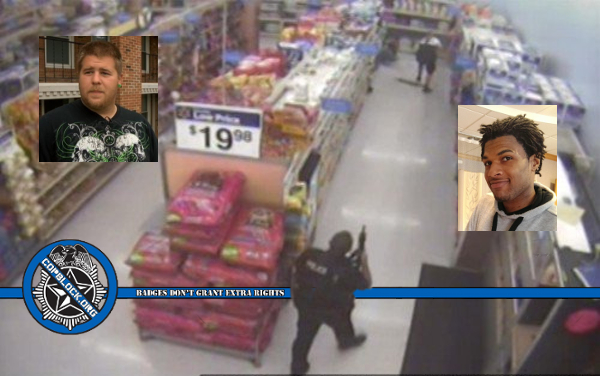 Earlier this afternoon, Fairborn Municipal Court Judge Beth Root ruled on an affidavit submitted by nine citizens finding that there was probably cause to charge Ronald T. Ritchie with the first degree misdemeanor crime of “making false alarms.” Ritchie was the person that made the 911 call claiming that John Crawford was pointing a gun at people in a Beavercreek, OH Walmart.

The officers who responded to that call, which Ritchie has since characterized as a “prank,” subsequently shot and killed Crawford. In reality, Crawford was merely holding an unloaded BB gun that was for sale at that Walmart.

Beavercreek police have been heavily criticized for being too quick to shoot Crawford without discerning if the gun was real or giving him an opportunity to surrender first. Even among those who believe the cops were justified in shooting Crawford, many believe that Ritchie was ultimately at fault for making the false claims that Crawford had threatened people with a gun.

It was also reported that several other charges were submitted within the affidavit that was accepted, but those additional charges were dismissed as not having sufficient probable cause to support those charges.

Nine citizens filled out affidavits — that were delivered to the court on March 25. Judge Root found in those affidavits that probable cause does exist to prosecute Ritchie for the accusation of making false alarms — a first-degree misdemeanor.

The names of the nine people who filed the affidavits are a matter of public record and can be accessed by the public at any time on the court’s website.

The nine are: Roy Qualls; Matthew Raska; Alice Diebel, Kevin Jackson, Lynn Buffington; Jessica Thomas; Mary Gentile; Enoch Fannin and Michael Casselli Jr. All but one of those who filed the affidavits live in Yellow Springs. The other lives in Fairborn.

The affidavits that were submitted questioned whether or not there was enough to prosecute him on charges related to inducing violence, inducing panic, involuntary manslaughter and reckless homicide — all of which were dismissed as not having enough probable cause.

Whether Ritchie will actually be charged with a crime is not certain at this point. A judge also ruled that there was probable cause to prosecute the police officers that murdered Tamir Rice. However, Cuyahoga County Prosecutor Timothy McGinty refused to file those charges and instead used a rigged grand jury presentation to clear Officer Timothy Loehmann and Frank Garmback.

Of course, Ritchie doesn’t have one of those magical uniforms that renders people impervious to criminal penalties beyond a theatrically delivered slap on the wrist. Ritchie also would make for a pretty good scapegoat to pin all of the blame on and deflect it from the cops that actually killed Crawford.

So he may actually be in for a much rougher ride than those Heroes that murdered a twelve year old in Cleveland.