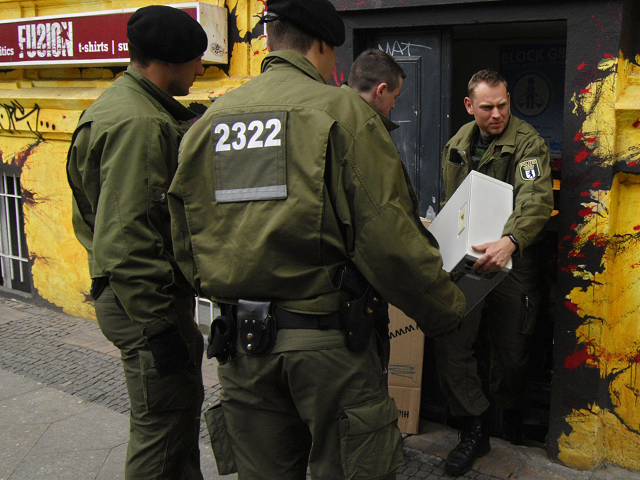 Police in Berlin have raided ten apartments because residents may have posted “anti-migrant” views online.

The force confiscated mobile phones, narcotics and weapons. Nine suspects were arrested, aged 22-58, and are accused of posting messages critical of migrants, migrant helpers and some anti-semitic slogans on social networks like Facebook, WhatsApp, and Twitter, reports Berliner Morgenpost.

The Berlin police have told media that they already knew of the suspects and said that many of them have what they consider a “right-extremist” background. Police spokesman Stefan Redlich said that while many of the men shared anti-migrant views, “the men do not know each other according to previous findings,” and there was no evidence of any planned conspiracy to commit crime among them.

In some of the homes searched police were forced to admit they hadn’t found anything at all, but Redlich justified the raids saying they were maybe, “people who just once expressed their hate-opinion.”

One of the raids in particular was prompted by a Facebook comment to an article regarding an Afghani migrant who was shot dead at the Bulgarian border. The incident took place in October and according to Bulgarian officials it was an accident as a bullet was meant to be a warning shot but ricochet and hit him.

The post responded to the article saying that it was unfortunate too few migrants met with a similar fate, as it might scare the rest of them from coming.

Police announced that the raids show Germans that they are not as safe online as they might think. They say that anyone who says something xenophobic, spreads hate toward migrants, or shares what they consider to be xenophobic music, may be next on the list of apartments to be raided in the future.

Fifty-eight police were involved in the raids and some illegal items were found in a few of the apartments. Police found one revolver handgun, though it was not mentioned if it had any ammunition or whether or not is was deactivated. They also found an air soft gun, which requires a license to own in Germany and a stun gun that appeared to be camouflaged as a flashlight.

Spokesmen Redlich also mentioned that they had found several unconstitutional symbols but did not divulge specifics. Banned symbols in Germany include Nazi era symbols like the swastika and various Nordic runes used by the Nazis during the era.

Berlin has seen a rapid increase in prosecutions for speech on the internet. In 2014 there were 196 investigations into anti-migrant and xenophobic posts, while 2015 saw 289 cases. In the last six months there have been three raids prior to this one, but so far this has been the largest in scale. Investigators have set up a special task force who work with the organization Network Against Nazis (NAN),  headed by ex-stasi agent Anetta Kahani, to monitor internet postings across Germany.

Google and Facebook have been criticized for helping the German government crack down on speech that is critical of migrants and of the policies of German Chancellor Angela Merkel. The policy led to the deletion of the Facebook account of a young girl who spokeout about the migrant crisis and how she no longer felt safe walking the streets of her town.

Redlich says that the team is constantly searching YouTube, Twitter, WhatsApp and especially Facebook where most cases are pursued because users are forced to use their real names. He said the message of the raids is clear, “the internet is not above the law.”

The raids come just days after British police issued an apparently menacing tweet, warning them not to get into trouble on-line. As reported by Breitbart London, the Greater Glasgow Police offered internet users this helpful advice: “Think before you post or you may receive a visit from us this weekend. Use the internet safely. #thinkbeforeyoupost.”