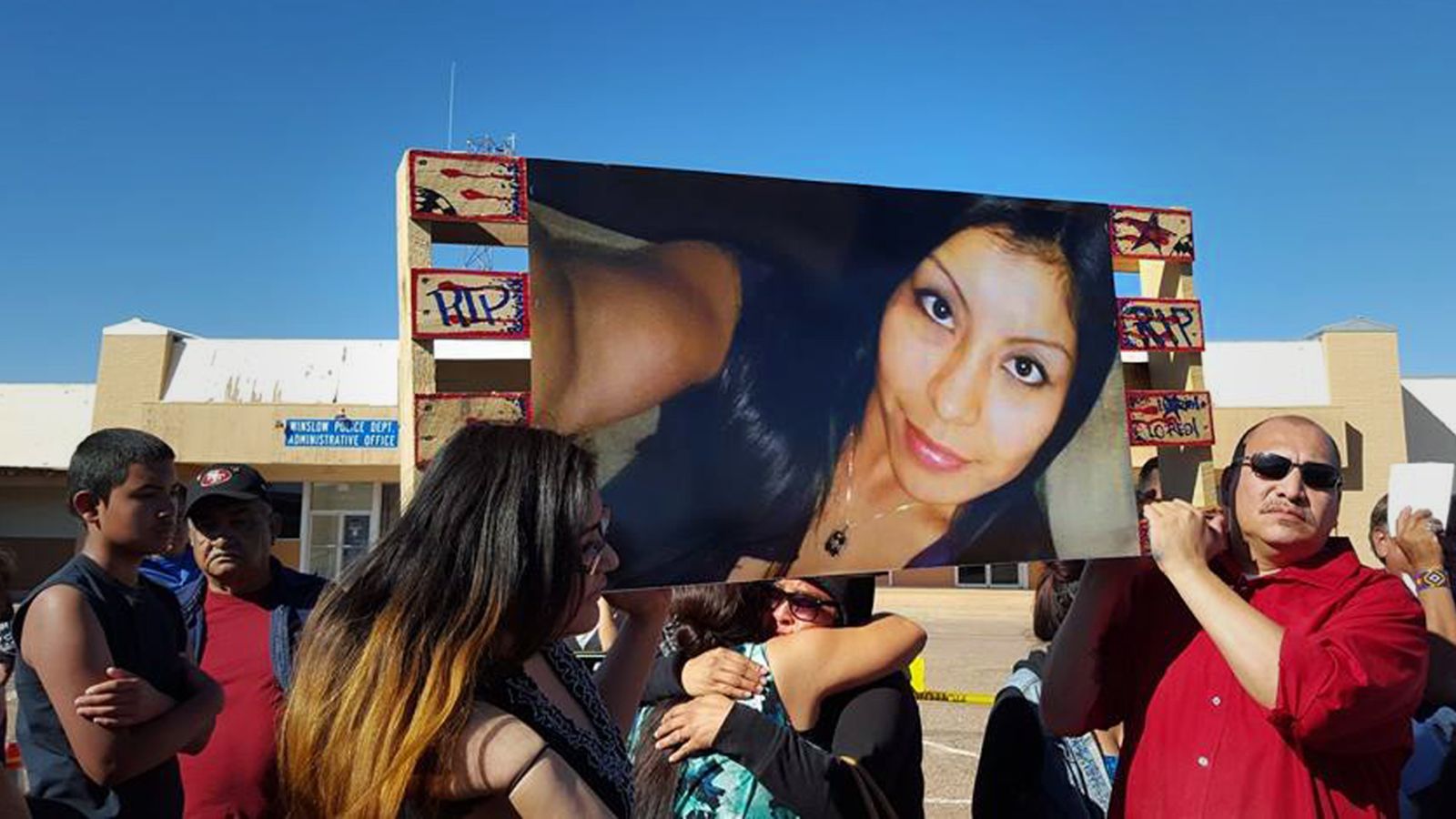 Native Americans living near the Navajo reservation in Arizona are asking why a “big white male” police officer had to shoot a “petite Native woman” five times. Native American leaders in the town of Winslow say police left Loreal Tsingine’s lifeless body on a sidewalk for hours, lying there with bullet wounds on her hand, arm, and neck and exit wounds in her back.

Winslow Police claim the 27-year-old mom, who was shot dead on March 27th, resisted arrest and threatened officers with a pair of scissors. Witnesses recount a much different story.

People who saw the scene unfold near a Circle K convenience store say they thought they were seeing a normal shoplifting arrest. “We were walking, and I said, ‘Look, they’re going to arrest her,’” local resident Ryanle Benally told KPNX-TV. “But that didn’t happen.”

Winslow police officer Austin Shipley fired five shots and killed Tsingine, according to the Arizona Department of Public Safety. Police say Tsingine fit the description of a shoplifter they had been looking for: a Native American female wearing gray sweatpants and a white top. Winslow Police officials say the scissors Tsingine was carrying “presented a substantial threat to the officer,” but some witnesses have told local reporters they never saw her raising her hands at the responding officers.

Tsingine’s death has brought Native American leaders across Arizona together to call for an independent investigation of her killing. They’re also demanding the U.S. Department of Justice review what they describe as the persistent racial profiling practices of police that target Native Americans in the border towns around the Navajo Nation, a semi-autonomous area about the size of West Virginia that borders Arizona, Utah, and New Mexico.

Native Americans are more likely to be killed by law enforcement officials than any other racial group.

– Center on Juvenile and Criminal Justice

“The taking of a Native American person’s life in the border towns that surround Indian nations’ reservations is not new; it has happened year in and year out. It has happened over and over again,” said Rep. Albert Hale, a member of the Arizona State Legislature’s Native American Caucus, during a press conference Monday.

Rep. Hale sent a letter to Attorney General Loretta Lynch on Monday urging her to investigate the Winslow Police Department to “address the community’s longstanding and deep-seated concerns about systemic misconduct toward Native Americans.”

“We can attest to persistent reports by local citizens—ranging from young people to the elderly—of unlawful stops, use of excessive force and other coercive activities by the Winslow Police Department,” read Rep. Hale’s letter, obtained by Fusion.

But this issue may go beyond the border towns of the Navajo Nation.

On the national level Native Americans are more likely to be killed by law enforcement officials than any other racial group, according to research.

Native Americans make up 0.8% of the population in the U.S., yet they comprise 1.9% of police killings, according to the San Francisco-based Center on Juvenile and Criminal Justice, which analyzed data collected from 1999 to 2011 by the Centers for Disease Control and Prevention.

After Native Americans, it’s Africans Americans who are more likely to be killed by police. African Americans, 13% of the population, are victims in 26% of police shootings, the study found. They were followed by Latinos, whites, and Asian Americans.

The Native American leaders are pointing to Tsingine’s death as an all-too-common example of their people dying after an interaction with law enforcement. They say when the media covers these killings, the stories don’t go beyond local outlets. They’re hoping to find the same level of local organizing, media attention, and national recognition that the #BlackLivesMatter movement has attained.

We hear about these types of shootings happening across the country

“This tragedy is a violent example of a long series of racial profiling and police trying to penalize people for being in the area,” said Curley, the member of The Red Nation, who helped organize a vigil for Tsingine on Saturday.

“The police constantly surveil, harass, and intimidate us. This violence is in no way isolated. For Natives, border towns are a dangerous place because of the police,” he said.

A spokesperson for the Arizona Department of Public Safety would not comment on the allegations of racial profiling because he said his agency does not respond to questions that are not based in facts relevant to the case. Officer Austin Shipley, 26, is on paid administrative leave for the duration of the investigation into Tsingine’s death.

Curley said Native Americans living in reservation border towns are policed heavily on a daily basis by law enforcement. He cited an annual report released by one of the larger police departments surrounding the Navajo Nation as evidence police officers profiled and targeted Native Americans. In nearby Flagstaff, the latest 2014 report found 45% of those arrested were Native American, even though they only make up 11.3% of the city’s population. Flagstaff’s white residents make up 43% of arrestees; they make up 80.4% of the population.

A spokesperson for Flagstaff police said the department does not target Native Americans in any of their arrest policies and procedures.

“Our arrest rates are what they are because they mirror our population. We have lots of folks that come into the city and don’t register as living here. They might be living with relatives, they may be staying in a shelter, they may just be coming off the reservation,” said Sergeant Margaret Bentzen, a public relations officer for the Flagstaff Police Department.

Curley said he believed the arrest data in “Winslow is no different than Flagstaff,” noting he was referencing statistics from Flagstaff because the department is the only law enforcement agency in the area to release demographic data of arrested individuals.

“These officers are the descendants of settlers and in many ways they have internalized the racist viewpoints of their ancestors,” Curley told Fusion.

In 2014 the Flagstaff police force had 99 white police officers. 14 Latinos officers, one African-American, and one Native American officer, according to its annual report.

“It is going to require intense grassroots pressure to ensure justice is carried for Loreal Tsingine,” Andrew Curley told Fusion.

Curley and his group, the Red Nation, are demanding “an independent review with a publicly available report into the circumstance of Loreal’s murder, including witness testimony, forensic analysis, and other crucial items of evidence, as well as the Winslow Police Department’s personnel records of Officer Austin Shipley.”

It is going to require intense grassroots pressure to ensure justice is carried for Loreal Tsingine– Andrew Curley, The Red Nation

Reporter Charly Edsitty of KPNX obtained documents that show Shipley has been disciplined by the Winslow police department twice. Earlier this year he received a one-day suspension without pay for violating a policy on the “application of [a] taser.” He was also suspended in 2013 for one day and mandated to attend diversity training for making “inappropriate” comments. The documents do not cite the words Shipley used, but a lieutenant said “Officer Austin Shipley has the responsibility to conduct himself in a professional manner with the concerns and compassion of the citizens being first.”

Navajo Nation President Russell Begaye said he is prepared to take Tsingine’s case to the courts if the state does not deliver a thorough investigation.

“If there is no legitimate justification for taking Tsingine’s life, then the Navajo Nation wants the fullest extent of the law to be taken in serving justice,” Begaye said in a statement.

“We hear about these types of shootings happening across the country,” he said.