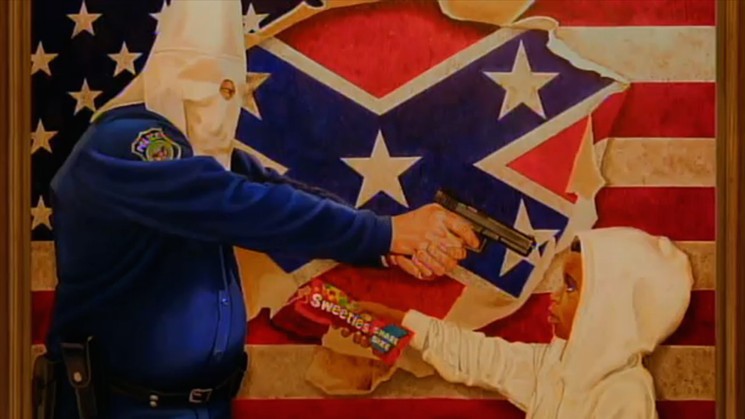 When it comes to teen artistic expression, authorities tread a very thin line when censorship comes into play. The line was tested in Denver recently, after a student’s artwork was removed from a show following criticism by police. Thus ignites a firestorm of controversy around the possible suppression of works critical of police.

“Art reflects real lives and real concerns”, said Ken Paulson, president of Newseum Institute’s First Amendment Center, the AP reports. “That’s what art does”, says Paulson, undoubtedly few artists, including the young student in question, would disagree. Among them is New York artist Michael D’Antuono, an inspiration of the students. “She should have been praised and encouraged for sparking critical thought.” D’ Antuono received criticism himself for his own painting, made in protest of the Trayvon Martin killing.

Her initial assignment was to draw inspiration from historic works, and then aim it at current events. According to Denver’s school district, she chose Spanish master Francisco De Goya’s “The Third Of May 1808”, of rebels being executed.

Her own piece depicted a KKK hood-clad officer holding a hoodie wearing black child at gunpoint. The American flag is used as a backdrop, torn through it’s center to reveal a Confederate banner. Her edgy painting was eventually honored in Denver’s annual Best-Of-City show, and then she took it down.

Exactly what all transpired behind closed doors is unclear, but certain details are for certain. Denver’s Police Protective Association said the piece “perpetuates hate and dissension between the police and our citizens.” Following the comment, Denver school districts communications chief, Nancy Mitchell, said the girl herself asked that her painting be taken down. “She’s passionate about her art”, said Mitchell, “but didn’t want to make trouble.”

A private meeting was eventually organized bringing together the girl, her mother, the mayor, school superintendent, and police chief. What occurred in that meeting remains unknown, as does her name, and authorities claimed she didn’t want to speak publicly. The meeting was arranged by Mayor Michael Hancock, reputedly to hear the 10th grader out. According to the AP, following the meeting authorities were quick to insist the girl hadn’t been pressured into removing the art. Mayor Hancock called the girl a “very mature, steady, confident, beautiful, articulate young lady.” Continuing to speak for her, Mayor Hancock stated her art expressed Denver’s history with the klan, while the police chief said it involved police concerns. Although little is known about the student, her minority ethnicity is implied, as her parents required Spanish translators at the private meeting. Denver still remembers the killing of 17 year old Jessica Hernandez, who reputedly drove a stolen car towards officers.

Even if the girl willingly withdrew her work, some feel the move will only discourage future conversation on police amongst students. Lawyer Frank LoMonte, of the Washington-based Student Press Law Center, fears the silence might spread across the state. LoMonte speaks to fears certain communities have towards police, “however well founded or not that fear may be”, he says. “It’s real, it exists, and it’s something the community should be discussing.”

Police intervening in the artistic expression of high school students isn’t new, however, or isolated to Colorado. A student of Wisconsin’s Wauwaotsa East High School once caught the attention of Tosa’s police chief with a single comic. The cartoon, published in the school newspaper, showed a Wauwatosa officer pulling someone over saying, “you realize you’re a black man driving in Wauwatosa right?” The student was unapologetic for the comic, stating they were only drawing their observations living in the suburb. Police Chief Barry Weber publically criticized the comic, stating such things can “cause problems when in fact, there are none.” Despite the chiefs beliefs, Wauwatosa’s police department did indeed have a well established reputation for targeting blacks with traffic stops. Not only that, but following the comics publication, Chief Weber admitted he had little idea how widespread racist ideas in the department were.

Similar to the Denver student, this student’s comic provoked critical thought and conversation on what many people had seen or experienced anyways. An educational environment should be a space reserved to discuss issues, and such measures restrict this vital activity. It’s one thing for police officials to disagree with artwork, or an article. It’s an entirely different , ethically questionable matter, to use one’s power to suppress said ideas. Whether in Wauwatosa or Denver, the tone taken in such criticisms is consistent– don’t rock the boat.