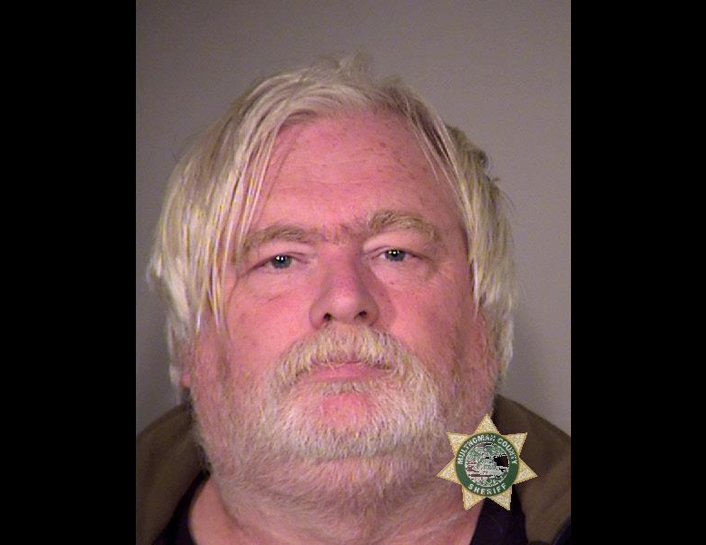 Robert Lee West, aka “Uncle Bob”, was arrested last weekend in Portland doing what he does best – filming the police.

Neither being arrested for filming the police nor the lame reasons the state gives for those arrested are new experiences for a seasoned CopBlocker. This is true for “Uncle Bob”, and his colleague Mike “BlueHair”, as both are long time CopBlockers with many years of experience.

What events lead up to the arrest of Uncle Bob?

It all started when the SERT team of Multnomah County was called to an active shooter scene. It turned out a man had discharged a firearm within the city and refused to come out of his house. A perimeter was set up and sectioned off with “Police Caution” tape as the SERT team prepared to extract (or surround) the shooter.

Uncle Bob, being the full time police journalist that he is, decided to defy the police tape and sought to document whatever events that would unfold. When the SERT team entered the perimeter they noticed Uncle Bob and arrested him.

Below is video of the day Uncle Bob was arrested along with the audio of a hearing he had a few days afterwards on an unrelated matter (a totally separate arrest). What’s interesting about this hearing is that the ‘State’ is requesting additional bond conditions for Uncle Bob even though they were previously established, the request was NOT in writing and would be a violation of his first amendment rights. Furthermore, they would also put him out of a job since Uncle Bob is a full time police journalist, see video.

The state wanted Uncle Bob to stay 150 feet away from active police officers even though that would be a violation of his first amendment rights. Uncle Bob’s council objected stating that the request was made outside standard procedure and would also cost him his job. At the end of the day the judge ruled that Uncle Bob must comply with all orders given to him by police officers.

Which is kind of ironic because the judge stated that she understood why the state was requesting such a condition, because something could happen to Uncle Bob tomorrow (so, for his own safety), but she failed to realize that ‘the something’ could also be toward Uncle Bob.

Now the police know that he must obey all their orders and probably suspect that he won’t. This opens the door for police officers to give him outlandish commands that, according to the judge, he MUST follow. If he does not he’ll end up in jail without question, without a trial and despite the legality of the officer’s ‘command.’ Which is pretty absurd if you ask me.

Furthermore, if police SWAT (or SERT) teams were more accommodating to journalist, or produce their own videos in a timely manner, than Uncle Bob wouldn’t have to be endanger himself – or the SERT team’s objective – to cover the story. For those who don’t remember this far back, there was a time when taking risks to get a story was considered good journalism. Today you’re a criminal and must have your money, rights and/or freedom taken from you.

So what’s all this about?

It boils down to one thing – transparency of police actions.

Uncle Bob is willing to do whatever it takes to bring transparency to Portland police employees. While police, prosecutors and judges are willing to do whatever it takes to protect their own and keep their actions away from Uncle Bob’s (or anyone’s) camera. Of course the state actors look like complete hypocrites when those that claim to protect you really endanger you. When the justice system takes your rights instead of upholds them. Or when they say you have to do whatever an officer says because they don’t want to infringe on your ‘first amendment rights.’ There are far too many times where the state fully contradicts itself.

We either have first amendment rights or we don’t. The constitution doesn’t have asterisks in it! And I don’t believe we do have them, I’m just pointing out that the state claims EVERYONE does yet it routinely modifies, limits or removes these rights all together.

Seriously, are there any rights that are actually inalienable? It seems that anything the state claims you can do comes with an exception clause. While the rules for the state and its agents are flexible. Hopefully Uncle Bob doesn’t get caught up in the system thanks to this egregious condition. Yet, he’s a seasoned CopBlocker so I’m sure he’s fully prepared and so is his camera.