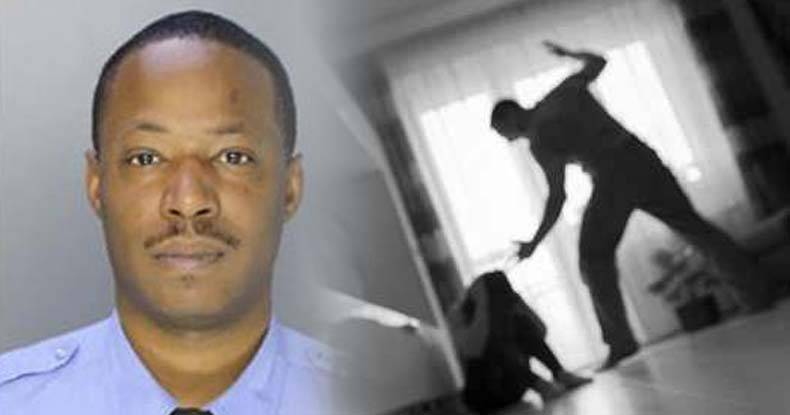 This post was originally published at the “Ms. Magazine” blog in October of 2015 by Alex Roslin and Susanna Hope (who was married to a police officer for 20 years) under the original title “Police Wife: The Secret Epidemic of Police Domestic Violence.” (See below for their full biographies.)

Domestic violence takes place in up to a staggering 40 percent of law enforcement families, but police departments mostly ignore the problem or let it slide, write ex-police wife Susanna Hope and award-winning investigative journalist Alex Roslin in their new book, Police Wife: The Secret Epidemic of Police Domestic Violence. The following excerpt is adapted from their book, available on Amazon or as an eBook from their website, and is being published as part of the Ms. Blog’s Domestic Violence Awareness Month series.

According to Alex Roslin, “Police Wife” itself has more than 60 pages of appendices giving advice and resources to survivors, family and friends plus recommendations for advocates, police, governments, journalists and researchers.

In order to help survivors and others, they’ve made virtually all of the appendices available for free through their website. Here is the direct link to this extended free excerpt.

The propensity for police to abuse their wives, children, and other family members is, of course, no secret among people who read CopBlock.org. It’s rare that more than a few days go by without a report of a cop having committed domestic violence and several CopBlock Network Contributors have posted about the increased risk that entails marrying or having the bad fortune to be the child of a cop. Obviously, the habitual efforts of Good Cops to cover up the crimes of those Bad Apples, is also a large factor in its commonality.

In 2009, in Utica, New York, police Investigator Joseph Longo Jr. killed his estranged wife, Kristin Palumbo-Longo, stabbing her more than a dozen times in their home, then stabbed himself to death. One of the couple’s four children discovered the horrifying scene on coming home from school that afternoon. Utica’s then-Police Chief Daniel LaBella said the killing was completely unexpected—an incident “no one could have prevented or predicted.” But Kristin’s family filed a $100-million wrongful-death suit saying city and police officials didn’t do enough about Longo’s troubling behavior before the tragedy.

Kristin had contacted police at least five times in the weeks before she was murdered, saying she feared her husband might kill her and their kids, but police supervisors discouraged her from making reports or seeking a protection order, the lawsuit said. In a preliminary ruling, a federal judge agreed that the police actions may have “enhanced the danger to Kristin and amounted to deliberate indifference.” The city settled the suit in 2013, paying the couple’s children $2 million.

The murder wasn’t an isolated tragedy. It was unusual only because it was so public and so bloody. A staggering amount of domestic violence rages behind the walls of cops’ homes, while most police departments do little about it. In the vast majority of cases, cops who hurt a family member do so in utter secrecy, while their victims live in desperate isolation with very little hope of help. Research shows:

It seems incredible that a crime wave of such magnitude and far-reaching social ramifications could be so unknown to the public and yet at the same time an open secret in a mostly indifferent law enforcement community. It is surely one of the most surreal crime epidemics ever—at once disavowed, generalized and virtually unchecked.

Aptly summing up the bizarre disconnect, retired Lieutenant Detective Mark Wynn of the Nashville Metropolitan Police Department in Tennessee told PBS in a 2013 story on the issue: “What’s amazing to me is we’re having this conversation at all. I mean, could you imagine us sitting here talking about this and saying, how do you feel about officers using crack before they go to work, or how do you feel about the officer who every once in a while just robs a bank, or every once in a while decides to go in and steal a car from a dealership? We wouldn’t have this conversation. Why is it that we’ve taken violence against women and separated that from other crimes?”

Domestic violence is bad enough for any woman to deal with. Shelters, many of them chronically underfunded, regularly turn away abused women because they’re full, while only about one in four incidents in the wider population ever get reported to police. Hundreds of U.S. communities have adopted “nuisance property” laws that encourage police to pressure landlords to evict tenants who repeatedly call 911 over domestic abuse, further dissuading victims from seeking help.

But abuse at home is far worse for the wife or girlfriend of a cop. Who will she call—911? What if a coworker or friend of her husband responds? Police officers are trained in the use of physical force and know how to hurt someone without leaving a trace. They have guns and often bring them home. And if a cop’s wife runs, where will she hide? He usually knows where the women’s shelters are. Some shelter staff admit they are powerless to protect an abused police spouse. Her abuser may have training and tools to track her web use, phone calls and travels to find out if she is researching how to get help or, if she has fled, where she went.

In the rare case where the woman works up the nerve to complain, the police department and justice system often victimize her again. She must take on the infamous blue wall of silence—the strict unwritten code of cops protecting each other in investigations. The police have a name for it—extending “professional courtesy.” In the words of Anthony Bouza, a one-time commander in the New York Police Department and former police chief of Minneapolis, “The Mafia never enforced its code of blood-sworn omerta with the ferocity, efficacy and enthusiasm the police bring to the Blue Code of Silence.”

It all adds up to the police having a de facto licence to abuse their spouses and children. And it’s a worldwide phenomenon that police families struggle with everywhere from Montreal to Los Angeles, Puerto Rico, the U.K., Australia and South Africa.

The torrent of abuse is virtually unknown to the public, but without realizing it, we all pay a steep price. Domestic violence is the single most common reason the public contacts the police in the U.S., accounting for up to 50 percent of all calls in some areas. Yet, a battered woman who calls 911 may have a two-in-five chance of an abuser coming to her door. Official investigations have found law enforcement departments that tolerate abuse in police homes also mishandle violence against women in other homes.

Abusive cops are also more prone to other forms of misconduct on the job—such as brutality against civilians and violence against fellow officers. We all pay as taxpayers when governments have to settle multi-million-dollar lawsuits with victims of police abuse or negligence. Police domestic violence also has close connections to a host of other problems—police killings of African Americans, sexual harassment of female drivers at traffic stops and women cops, and even more broadly, issues like growing social inequality and subjugation of Native Americans.

And police officers themselves are victims, too. Even though our society calls cops heroes, we give them little support to cope with the pressure of police work. A big part of the job is to wield power to control other people. As a result, policing attracts people who are good at controlling others or may have a craving for that kind of power—and then trains them to use their power better. Control is also the main driver of domestic violence. Is it a surprise then that so many cops are violent at home?

Susanna Hope (a pseudonym for security and privacy reasons) is a Canadian professional writer who was married for over 20 years to a police officer. She has two sons and two grandchildren.

Alex Roslin is an award-winning Canadian journalist who was president of the board of the Canadian Centre for Investigative Reporting. His investigative and writing awards include three Canadian Association of Journalists prizes for investigative reporting, a gold prize in the National Magazine Awards and nine nominations for CAJ awards and NMAs.