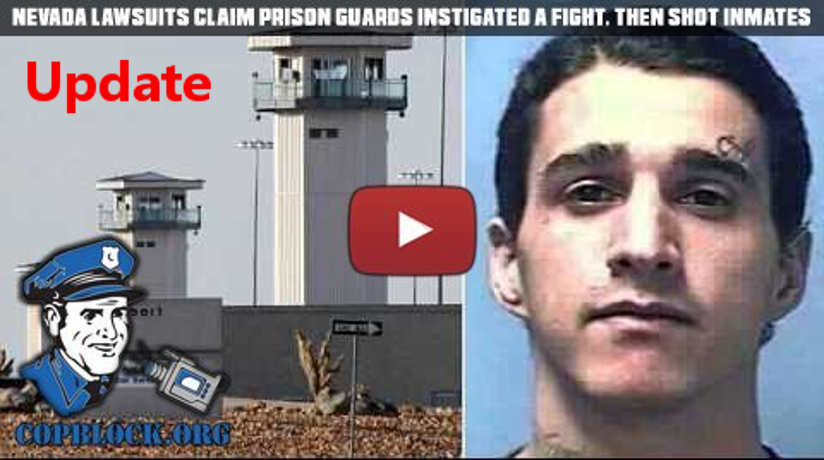 Last year, I posted about the shooting of two prison inmates at the High Desert State Prison, which is located at Indian Springs, Nevada, just north of Las Vegas. Lawsuits by the families of those inmates, Carlos Perez and Andrew Arevalo, claimed that a fight was instigated between the two prisoners by correctional officers in order to justify the shooting.

Both prisoners were handcuffed behind their back at the time of the fight and the lawsuits maintain that neither prisoner represented a threat to the guards sufficient enough to justify being shot. Carlos Perez died from his injuries, while Andrew Arevalo was gravely wounded, but survived. Although it was later overturned, Arevalo was also “internally convicted” of murder charges by the warden relating to Perez’ death (see the first video embedded below).

As I also posted about last year, this and other incidents of shootings by Nevada prison guards led to a review of the use of force within state prisons and the use of shotguns in such incidents. The resulting report (see the second video embedded below) stated that “Nevada’s Department of Corrections (NDOC) is improperly relying on live ammunition instead of proper staffing” and recommended they stop doing that. Not surprisingly, the NDOC responded to that report by saying they “hope to reduce the use of live rounds,” but won’t be doing so anytime soon and agreeing that they should hire more guards.

Yesterday, as a result of the aforementioned lawsuits, internal reports relating to the “investigation” of the shooting were released as part of the discovery process. While these disciplinary reports, which the Nevada Attorney General’s Office fought to keep secret, don’t address the claims of the fight being instigated by them, they do pretty clearly place the blame for the shootings on the guards involved.

Correctional Officer Isaiah Smith was written up for three allegations of neglect of duty and false statements for failing to report repeated, prior security breaches “which led to an inmate’s death.”

Carolos Perez, 28, died Nov. 12, 2014, from multiple gunshot wounds. Another inmate, Andrew Arevalo, now 25, was wounded. Both men were handcuffed behind their backs when they were shot in a shower hallway in a segregation unit known as “the hole.” High Desert is about 40 miles northwest of Las Vegas, just south of Indian Springs.

Another correctional officer who arrived after the shooting stopped said there were “vast amounts of blood everywhere on the tier.” Another officer, identified only as Senior Correctional Officer Mumpower, evaluated the inmates who were both handcuffed and lying on the ground, according to an incident report.

Mumpower determined Perez needed immediate medical attention. He placed Perez “on his left side as he heard him gurgling on his own blood and this would allow for it to drain out,” the report said.

Prison medical staff took Perez to a trauma room and administered CPR and other treatment for about 45 minutes before he was declared deceased, the report said.

Prison officials acknowledged Perez’s death when it happened but didn’t provide details. That he was shot by staff didn’t become known until four months later when the Clark County coroner reported the cause of death and ruled it a homicide.

Two civil lawsuits, one filed by Perez’s family, the other by Arevalo, are pending.

The latest documents were contained as exhibits in a motion by the attorney general’s office seeking dismissal or summary judgment of the case filed by Las Vegas attorney Cal Potter on behalf of Victor Perez.

Besides the officers, the lawsuits name the state, former Corrections Department Director Greg Cox, the warden and other administrators as defendants. A state board in March approved hiring private lawyers to represent the three correctional officers for up to $45,000 each.

Cox resigned in the fall at the insistence of Gov. Brian Sandoval.

Castro, Smith and the trainee who fired the four shotgun blasts, Reynaldo-John Ramos, were put on leave immediately after the incident. Ramos, who was on probation, was terminated. Castro and Smith resigned May 1, 2015.

The attorney general’s office sought to keep the internal reports secret, arguing they are personnel records not subject to disclosure.

“Those reports concern the state’s investigation of the events that give rise to this litigation,” Gordon wrote. “The public has an interest in seeing that the state properly and thoroughly investigates allegations of serious wrongdoing.”

At the time of the shooting, both Perez and Arevalo were in a segregation unit known as “the hole,” where regulations require that inmates be moved one at a time and “all escorts of retrained inmates are hands on.”

Castro, according to the documents, admitted he often failed to comply with the regulation, telling an investigator, “Pitch and catch, that’s the norm at HDSP.” The description refers to allowing inmates to walk unescorted from one correctional officer to another.

The report said Castro failed to directly escort Arevalo from the shower to his cell, and also allowed Perez out of the shower without a hands-on escort while Arevalo was in the hallway. The two inmates got into a fight, and Castro failed to intervene, instead leaving the area to find a pair of gloves.

“The use of the shotgun would not have been required had … Castro followed policy and had he not had two inmates out of the cells at the same time,” the report said, adding that had he broken up the fight “the other officer would not have used the shotgun to quell the fight.”

Smith was also cited for failing to intervene in the fight. The report said Smith had witnessed Castro moving multiple inmates out of the cells at the same time but failed to report the security breaches.

The Review Journal also reports that “The attorney general’s office has been investigating the case for a year for potential criminal charges.” I wouldn’t suggest holding your breath on that, though.