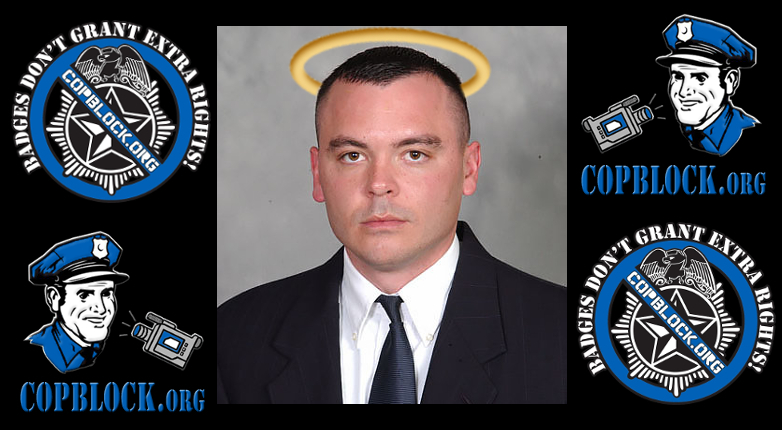 An Indiana State Trooper somehow thought that giving people tickets was a really good opening to try and save their souls:

“Excuse me Ma’am, have you accepted Jesus as your lord and extortionist?” – Trooper Brian L. Hamilton

That’s how I imagine it went down anyway (because it makes me laugh, a lot).

To be fair though, he did give them warnings rather than actual tickets. So it was more of a case of capitalizing on the opportunity to stalk and question people about their personal lives while holding them at gunpoint that his job afforded to him.

It’s been reported (by just me) that all of the drivers Trooper Hamilton stopped stated that they hadn’t expected a police officer to use the traffic stop as a pretense to try and convert them. Because nobody expects the Inquisition. (Yeah, I did that.)

According to the New York Times:

An Indiana state trooper has been fired after drivers complained that he gave them more than tickets and a lecture about road rules after pulling them over — he also shared a little religion on the roadside, in one case asking a woman if she had “accepted Jesus Christ as her savior.”

The State Police said on Friday that the trooper, Brian L. Hamilton, a 14-year veteran, was let go on Thursday for repeatedly proselytizing and for handing out a religious pamphlet during traffic stops.

The authorities said his termination was based on a complaint in January that said he had questioned a driver’s religious affiliations after pulling over the vehicle — the second time in about 18 months that the State Police were aware he had done so.

After a similar episode in 2014, officials said, Trooper Hamilton was formally told not to question drivers about their religious beliefs or try to convert them.

The State Police superintendent, Douglas G. Carter, said in a statement, “While I respect Mr. Hamilton’s religious views, I am also charged to respect every citizen’s rights, and the best way forward for the citizens of Indiana, and for Mr. Hamilton, was to end his employment as a state police officer.”

A call on Friday to a telephone number associated with Mr. Hamilton in Connersville was answered by a man who said the former trooper was not talking to reporters; he also did not reply to questions about a lawyer.

The State Police gave no further details about the two cases, but Indiana court documents shined some light on the trooper’s proselytizing.

On Aug. 9, 2014, the trooper pulled over Ellen Bogan, who was traveling north on Highway 27 in Union County, which is in the eastern part of the state. Trooper Hamilton, who was driving south, did a U-turn and pulled up behind her with flashing lights. She stopped on the shoulder.

Trooper Hamilton told Ms. Bogan through the window that she had been pulled over for an illegal pass. When he handed back her license and gave her a warning ticket, he then sought her permission before asking her personal questions, including whether she had a “home church” and if she had “accepted Jesus Christ as her savior.”

Ms. Bogan said she felt as if she could not leave or refuse to answer, the complaint said.

The trooper then gave her a pamphlet for First Baptist Church in Cambridge City, which outlines “God’s Plan for Salvation,” which requires a person to acknowledge being a sinner, among other things. It also advertised a weekly radio broadcast called“Policing for Jesus Ministries.” The complaint said she found the questioning and proselytizing “extremely upsetting.”

That case was later settled, partly with the condition that the trooper undergo counseling.

The American Civil Liberties Union in Indiana provided a copy of the complaint.

Another such traffic stop occurred in January, and that led to a complaint filed on April 5 by the civil liberties union in district court requesting a hearing and damages. Wendy Pyle, a resident of Fayette County, said she was approached by Trooper Hamilton after she pulled into her driveway. He blocked her vehicle from behind and gave her a warning ticket for speeding. He then asked her what church she attended and whether she “was saved,” the complaint said. She said yes to both questions to “hopefully end the inquiries.”

Trooper Hamilton then gave her the name of the church he attends — and directions there.

The complaint called the proselytizing by Trooper Hamilton “ coercive,” adding: “It was unwanted. It was also extremely upsetting.”

A spokesman for the State Police, Capt. David R. Bursten, said Friday that residents had called or emailed expressing both support for and opposition to the trooper’s firing. He said the force of about 1,200 included Jews, Muslims, Christians “and probably things we are not aware of.”

Captain Bursten added, “I don’t think any of us wants to live in a society where any of those officers, on a whim, can turn on red or blue lights and pull you to the side of the road and then try to convert you to their religion.”

In the complaint from Ms. Pyle, she said she was later approached by a member of the church who said that the trooper had added her name to a prayer list.

Personally, I’d rather not live  in a society where any officers, on a whim, can turn on red or blue lights and pull you to the side of the road…,” but that’s the one we do live in currently. Road Pirates gotta generate that revenue. Of course, giving out warnings and directions to churches ain’t getting daddy those new shoes he needs. I’m not saying that’s the real reason he was fired, I’m just implying it in a really obvious way.

BTW: “He said the force of about 1,200 included Jews, Muslims, Christians ‘and probably things we are not aware of.'” I’m not saying they should start dunking people into water while tied to a chair again or anything, but that sounds a bit ominous. #JusSayin