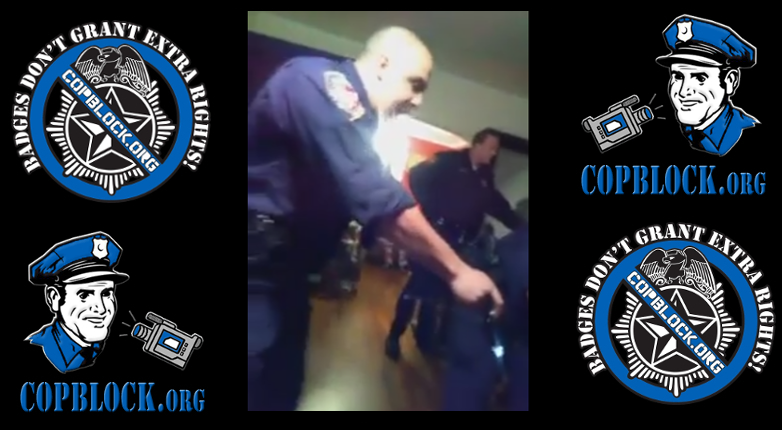 The video embedded below was posted to Facebook by the fan page for “Raphael RJ2,” a musician and producer who is part of “Beats How U Want ‘Em,” which is described as a “platinum and Grammy winning production team.”

The exact location where this was posted isn’t listed within the descriptions of the video, although it states that it was uploaded from Durham, North Carolina.

Below is the description posted along with the video:

What do you do when 8 Police Come to your door & Say “We smell weed & we need to check your house” and you say “No you can’t come in without a Search Warrant? Here’s the Answer:
1. Cops Burst in saying “We know that your son sells drugs”
2. Everybody in the house tased including one hit in the face by a Glock 9, then Choked & Kicked.
3. Everybody in the house Sits handcuffed for 4-5 hours while the Cops waited for the search warrant.
4. They find nothing?
5…..What do you do?

It shows a group of (eight, per the description) cops searching  a families house. Within the video the members of that family state that the cops had no permission to search the house, nor did they have a warrant to do so.

Apparently, according to the description posted, the pretense the police used to search the house was that they smelled marijuana and allegedly because “they know one of the residents’ children sells drugs.” (Which has been ruled by an appellate court as not a sufficient enough reason to constitute probable cause.)

In the beginning of the video and within that description, one of the residents states that a cop hit him in the head with his gun. Also, toward the end the cops become very aggressive and threatening. At that point, the video ends, presumably because the person filming it has been handcuffed. There’s no mention of any subsequent arrests.

It’s a pretty chaotic scene and there is a lot of yelling, but in spite of that it’s pretty clear that the cops didn’t find any sort of drugs or anything else illegal within the house.

Even if they had actually found drugs within the house, especially something as benign and harmless (and many would even argue beneficial) as marijuana, would that really justify terrorizing, assaulting, and holding people hostage while threatening to shoot them, as is depicted in this video?