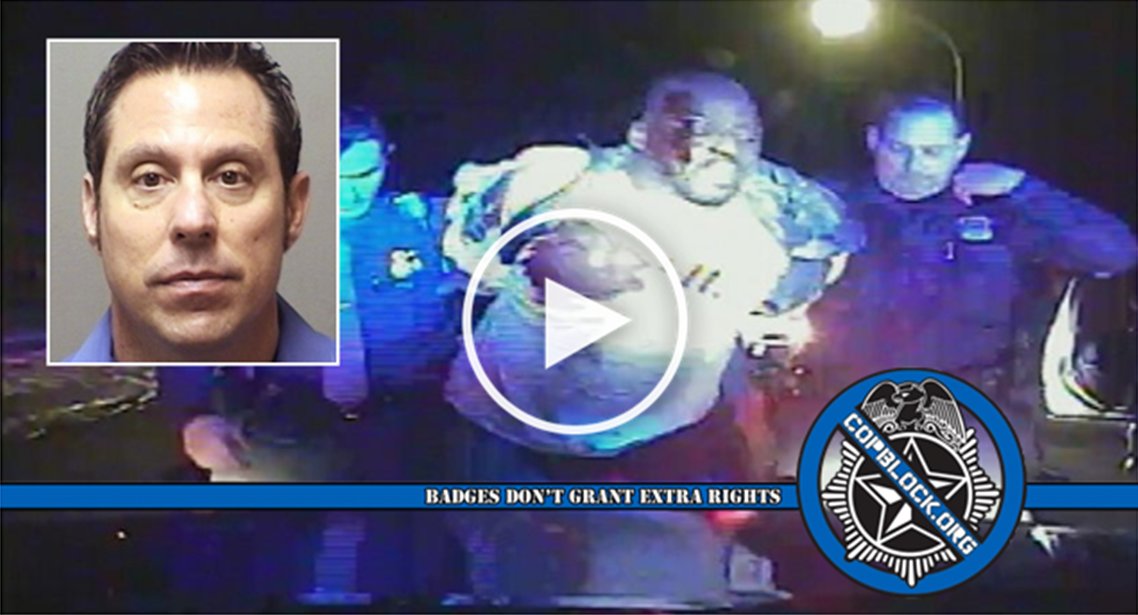 In a move that prosecutors are calling “outrageous,” a cop infamously known as “Officer Robocop,” has won an appeal in Michigan state court that could allow him an early release from prison after he completes a boot camp program.

William Melendez, who was fired by Inkster police in April of last year, began his criminal trial in May on the charges of misconduct in office, assault with intent to do great bodily harm, and assault by strangulation for the beating of 57-year-old Floyd Dent.

In November, he was convicted of the two former charges and had his bond revoked, forcing him to stay in jail. He faced up to a 10 year sentence, and in February, was sentenced to 13 months to 10 years in prison with Assistant Wayne County Prosecutor Robert Donaldson calling the beating “brutally excessive.”

Inkster Police had said Dent was found in possession of cocaine, had refused to show his hands, and made a verbal threat towards officers during a traffic stop in January, 2015.

Results of a polygraph test, however, told a different story – as did a dash-cam video of the incident, which showed Dent receive 16 blows to the head, a kick to the arm, and multiple taser strikes.

“I’m lucky to be living,” Dent said following the assault. “I think they were trying to kill me, especially when they choked me. I was on my last breath. I told them, ‘Officer please, I can’t breathe.’”

Police said they followed Dent’s car into a suburban Detroit neighborhood known for drug dealing and pulled him over for failing to come to a complete stop at a stop sign. They claimed Dent was trying to flee in his car, but the dash-cam footage clearly shows Dent comply with officers by pulling over and opening his car door in order to address them.

At no point does the footage show any attempt at retreat, or any threatening actions before the beating. Dent can be seen bleeding profusely from his head as officers escort him to a patrol car.

In lieu of the video, as well as the polygraph test Dent aced, the officers’ claims came under suspicion. Eventually, all charges against Dent were dropped and he filed a civil lawsuit against the city of Inkster that was settled for $1.4 million in May.

After the city couldn’t seem to find the money however, officials came up with a solution: a tax hike that required residents with at least $40,000 worth of property to pay roughly $130 each.

According to Mayor Hilliard Hampton, Inkster’s liability insurance policy allows only for payouts of above $2 million – and although the city had a surplus and was out of debt at the time of the incident – a consent agreement it has operated under for several years restricted tapping the general fund to finalize the settlement. Residents were given until Aug. 31 to pay up.

Melendez is the cop seen in the footage applying the chokehold to Dent. He is an ex-Detroit police officer, who was known as “Robocop” in that department.

Melendez’s sentencing guidelines called for a minimum sentence of 29 months to 57 months in prison, but Wayne County Circuit Court Judge Vonda Evans had the authority to tweak it. She ruled that his maximum punishment can be 10 years in prison but that he can be eligible for parole after serving 13 months.

Evans left the question of boot camp open but decided last week that “the Court is modifying the order and objecting to boot camp at this time.” The decision was appealed however, and now, the Michigan Court of Appeals has ruled that Melendez could serve the remainder of his sentence in a boot camp program.

The boot camp provides a path to early release under GPS monitoring or to a halfway house until the expiration of minimum sentences for eligible candidates after they complete a 90-day, military-style program. Melendez is currently being held at at the Bellamy Creek Correctional Facility in Ionia and his earliest release date is listed as December 15.

“It is unconscionable to me that the Michigan Department of Corrections would irresponsibly and recklessly decide that Former Police Officer Melendez, who was convicted of assault with the intent to do great bodily harm for the police beating of Floyd Dent, should be placed in its boot camp program,” Wayne County Prosecutor Kym Worthy said.

“This is outrageous. We argued at his sentencing that he should serve far more than what he was given, and this decision adds insult to injury – literally. The fact that he is even eligible for boot camp speaks to the need for an immediate change in the eligibility standards.”