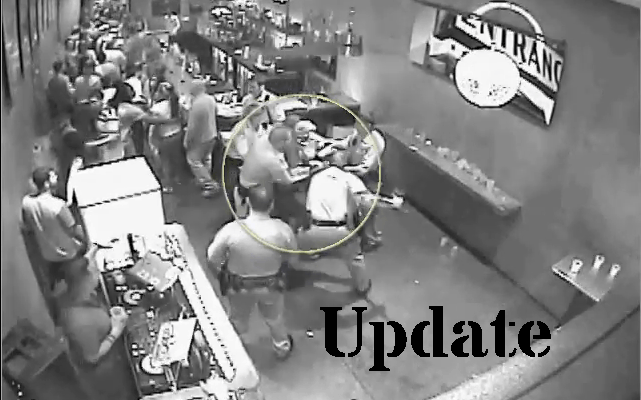 About a year and a half ago, Las Vegas Attorney Stephen Stubbs submitted a story to the CopBlock Network about a man who had been beaten by members of the Las Vegas Metropolitan Police Department.

That man, Dominic Gennarino, could be seen on surveillance video (embedded below) from the Vanguard Lounge, a bar/nightclub located on what is known as Fremont East in Downtown Las Vegas, being assaulted by a group of Las Vegas police officers. One officer in particular, identified as Officer Kolkoski, visciously jabbed Gennarino’s body with his nightstick during the attack and had to be restrained by another policeman.

Prior to that the cops had been clearing people out of the club after a stabbing (which Gennarino wasn’t involved in) took place there. Apparently, Gennarino’s “crime that precipitated that beating was that he wasn’t moving fast enough as he exited the bar, even though the video pretty clearly shows that the large crowd had prevented him from walking any faster.

Of course, once the video was made public the false charges (Obstructing a Public Officer) against Gennarino used to justifying the beating were dropped. Also, in response to the beating and the negative publicity it generated, the LVMPD promised that they were going to implement “fundamental policy changes” in their use of force policies, as well as their procedure for investigating use of force incidents. Those “fundamental” changes that were promised have since gotten some not so glowing reviews by Las Vegas residents, though.

Not surprisingly, given the history Las Vegas area police departments with regards to accountability, Metro’s Internal Affairs also concluded during their investigation that “the actions taken by employees did not rise to the level of misconduct or was not a policy violation” and those cops caught on camera beating an innocent man for no good reason wouldn’t face any sort of meaningful repercussions for those actions, whatsoever.

Of course, you have to consider that Clark County District Attorney Steve Wolfson refused to prosecute a group of police officers from the Las Vegas suburb of Henderson after they beat a diabetic driver they suspected of being drunk. The reason he cited for that inaction was because they train Henderson police to kick people in the head at the academy. So, even misconduct and policy violations are fairly hard to come by out here in Vegas with such a low bar of acceptability for pretty much whatever cops want to do on any given day.

In the latest update to this particular story, Stephen Stubbs posted to his Facebook profile on April 14th (2016) that Gennarino had received a settlement of $31,500 to compensate him for the actions taken by those LVMPD “employees.”

Las Vegas Metropolitan Police Department paid my client $31,500 today. He was beaten by police because he wasn’t moving fast enough, and then the police officer lied in the official report.

A special thank you to Jared Richards. We did this case together and Justice won the day.

Dominic Gennarino certainly deserves to be compensated for the assault and wrongful arrest perpetrated against him that day and probably by even more than the amount he received. (Apparently, he was satisfied with Metro’s first settlement offer.) However, as is always the case due to qualified immunity protections, this settlement will be payed by the taxpayers and not in any genuine way personally effect those officers who actually committed the crimes against Gennarino and then lied in official police reports in order to justify doing it.

Those of you that have followed CopBlock.org over the past several years are probably already aware that Stephen Stubbs is a frequent contributor of submissions to the Cop Block Network. In addition, I have personally worked with Stephen on a somewhat regular basis through Nevada Cop Block.

Therefore, there is a pretty lengthy list of posts on Cop Block involving Stephen Stubbs, his clients, and/or people or groups he is associated with. Included below are links to those posts.