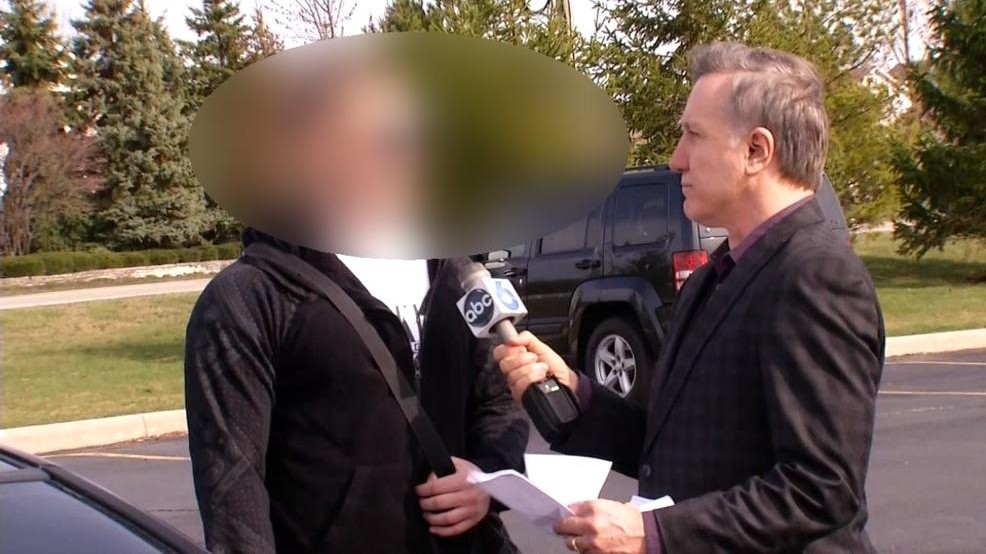 Cory Baker seems to be your average 20 year old who parties a little to hard and believes he’s invincible. Of course that’s due to lack of life experience and what most people do when first venturing out into the world, “on our own. Yet, there are times while we’re spreading our wings and taking our first flights that could change the course of your life forever.

This happened to me when I was arrested and charged with a felony for selling marijuana at the age of 19. This almost happened to Baker but the officers used their discretion when deciding to call his father instead of charging him and taking him to jail. You see his father, Tim Baker, is the Deputy Chief the Columbus (OH) Police department and no one wants to be the officer who ruined his son’s life with stalking, possession of fake ID’s and underage drinking.

According to ABC 6’s Tom Sussi:

The female students who live there called police. When officers arrived, Cory Becker led them on a foot chase. Sources say Becker had been drinking, had fake ID’s, and a Fraternal Order of Police Courtesy Card in his wallet. The card is jokingly referred to as “the get out of jail card.”

Becker wasn’t’ arrested, nor was he issued a summons. The only paperwork that exists is the department’s run sheet giving the caller’s name, but no others.

ABC 6 Investigators learned Becker was transported to Columbus Division of Police substation 4, then driven to the area of Hilliard-Rome Road and I-70, where his father met him and drove him home.

Deputy Chief Becker and Chief Kim Jacobs did not return calls for comment. The department’s public information officer, responded with an email that reads, “I can save you a lot of time if you call me about this. What you say did not happen.”

I wonder if public information officer knew that Sussi has interviewed Baker and that the officers were thrown under the bus?

Quick note about the “tip” coming from a LEO. I really don’t want to hear one word about “here’s a good cop busting the bad ones” because I’d be willing to bet real money that the ‘source’ has a vested interested somewhere within this. Cutting down the Deputy Chief is one way to get another peg up on the Piggy ladder. So until this ‘source’ starts outing all the other dirty pigs around him, I’m just going to assume someone was looking for a promotion the easy way.

That being said, I’d like to talk about officer discretion, since it was mentioned, and how it basically negates any law on the books. What’s the point of having a law if the officer on the street at any given time can just say “fuck it, I’m not enforcing that today.” Yet, and sometimes with the same breath, an officer will also say they’re just ‘doing their jobs’ when you’d like them to use that discretion. And they say if as if their being forced to do it but they agree with you.

Furthermore, this means that while you might not be pulled over (ticketed, caged or whatever) by Pig A for Crime B because they used their discretion you might be pulled over by Pig B for Crime B. This creates a misunderstanding of the law or what’s ‘allowed’ and the best example is speeding. While some pig will let you pass at 8 MPH over the speed limit, others nail you at anything over 5 MPH. Yet, the law is the law and they have a job to do, so 1 MPH should be what it is (by their terms).

And before all the CACB trolls jump on my back screaming I want the officers to follow the law to the letter, listen closely. If the laws were just, righteous and/or well intended you wouldn’t need discretion. Those laws, like theft, rape and murder, are always enforced or atleast I’ve never heard of a cop using discretion on someone who committed any of those crimes. Yet, for ‘crimes’ that discretion is applicable too, well, that’s a good indicator of whether that’s a meaningful law or not. If discretion is used then maybe that shouldn’t be a law anymore.

Which brings me back to the 20 year old Son of the Deputy chief. While I’m not going to say that this young man deserves to have his life heavily altered at his age for these exact “crimes.” I will say that maybe if it had happened his father would have a better understanding of what he may have done to some others while climbing the ranks police of the police force. Victimless crimes aren’t as funny when they start hitting close to home huh?

If it wasn’t for Daddy, or the fear of the arresting officers, Little Baker would have been a felon at the age of 20 and probably kicked out of school. It also would have resulted in the lost of his “right” to own firearms, to work at certain places (including following Daddy into the Goon Squad), restrict him from traveling to certain places and vote in political elections (which really is the least of the three).

What’s even more ironic is that LEO’s who are the ones commonly fighting to keep the drinking age at 21, so that their states can get federal funding for roads and college town LEOs can get revenue from underage drinking fines, and the unintended consequence of that is people creating, using and getting ‘caught’ with fake ID’s. I wonder if Baker Sr even realizes how his profession almost ruined his son’s life? That he bares some responsibility for it.

Lastly, none of this would be an issue if the police were privately funded instead of funded at the barrel of a gun (because, taxation is theft). There wouldn’t be any fake ID’s to be concerned about, no one would be ‘underage’ drinking and Baker wouldn’t have ran from private cops because unless you’re actually trying to harm someone, they’ll most likely be there to help you. Even Baker knew to run from the government police, he probably didn’t know why (because he was drunk) but his first reaction was to run, even though he didn’t have too.

So what are your thoughts on ‘officer discretion?’ Good for police or does it make them look like big hypocrites.