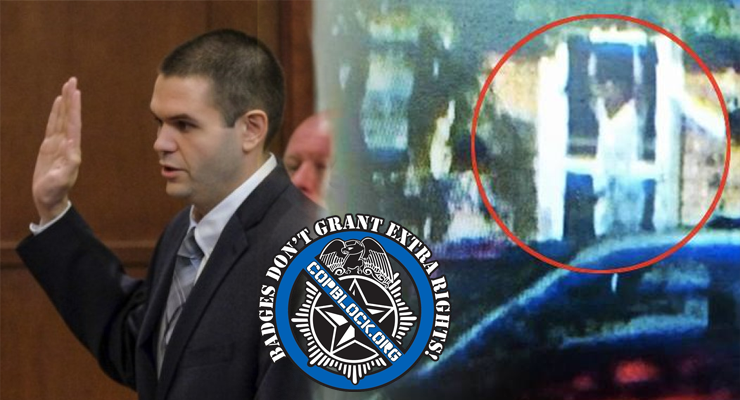 On August 29, 2013, Fairfax County police officer Adam Torres shot and killed John Geer as he stood in his own doorway, speaking calmly with Officer Rodney Barnes and the other officers who had responded to Geer’s townhouse 40 minutes earlier.  Geer’s partner, Maura Harrington, had called 911 because Geer was distraught over her announcement that she was moving out and taking their two teenage daughters with her, and was tossing furniture and personal effects outside onto the lawn.

On January 5, 2015, nearly a year and a half later, Fairfax County officials finally released Torres’ name to the public, something they refused to do until forced by a court order.  Adam Torres was not charged with second degree murder until August 17, 2015, almost two years to the day after he killed John Geer.

Thanks to a plea deal, Torres will almost certainly be home enjoying his freedom and the love of his family when John Geer’s family marks the third anniversary of their loss this coming August; Commonwealth’s Attorney Ray Morrogh has accepted a plea deal for involuntary manslaughter with a sentence of 12 months. Torres has already spent 8 months in county lockup as he has been held without bond since the day he was charged.

Whose Crime and Whose Punishment?

It was 10:04 AM when Torres, clad in a dark suit and noticeably thinner than in his booking photograph and the photos taken at the scene on August 29th, 2013, walked into courtroom 5J at the Fairfax County Courthouse. During the 30 minutes of court proceedings in the case, Morrogh amended the charge from second degree murder to involuntary manslaughter, announced the plea deal, and entered the autopsy report and sentencing guidelines into the record. He then gave an account of John Geer’s last day on Earth, including the end of his relationship with his long-time partner, and mother of his two daughters, Maura Harrington, which in Morrogh’s words, “Put him on a bad path that day.”

As is usually the case, more time was spent discussing Geer’s relationships, mental status, and alcohol intake than was devoted to discussing those of the mentally unstable trigger-happy cop who killed him. Morrogh alluded to some of the information about Torres’ marital problems not being allowed by the judge. However, Morrogh did point out that Torres had gone home sick as recently as August 1,2013 confessing to his supervisor that his wife was going to Hawaii with another man, and “I don’t care about anything anymore.”

The Torres marriage was more than rocky, with reports of infidelity, Adam Torres’ name and address turning up in the Ashley Madison data leak, and even multiple incidents of Torres calling off work or being sent home because of his erratic mental state.  From the Washington Post:

One time in 2012, his supervisor reported that Torres showed up for work “dazed, out of sorts, not focused at all. He wasn’t able to put together a full sentence,” prosecutors said Thursday. “Finally he said, ‘She’s cheating on me,’” Deputy Commonwealth’s Attorney Robert McClain…

…McClain said the first episode occurred on Sept. 12, 2012. Torres’s supervisor reported that Torres was “looking bewildered” at work because “he thinks his wife is cheating on him.” The supervisor, Sgt. Ronald Theal, suggested Torres take the day off “because of concerns of how his emotions would affect his ability to do his job,” and Torres did go home.

Indeed, Torres and his wife were arguing immediately before Torres arrived at Geer’s home. Morrogh stated there were 30 texts exchanged and a 16-minute phone call.

Immediately after shooting John Geer, Torres confessed to an angry Barnes that he had been arguing with his wife that day. Since the time of his interview, Torres has contended that the argument was not a factor and that he shot Geer in self-defense because he saw him move his hands quickly down to his waist. This recollection is not shared by any of the other officers on the scene, who recounted that Geer slowly started to lower his hands, and that they never were lower than his shoulders before he was shot.

Today we learned in court that, at the moment he was shot, Geer had been talking to Officer Rodney Barnes about his family. “My daughters – they’re great.”

And then bang! Geer was shot in the chest with no warning. The bullet passed straight through, causing what the medical examiner described as “irreparable damage” to the heart and lungs. Geer collapsed behind his front door and bleed to death in minutes.

Morrogh said that the primary reason he accepted the plea deal put forward by Torres’ defense attorney was the conversation he had had with Maura Harrington this weekend. Harrington was very concerned about the well-being of her daughter and the emotional toll it would take to witness the kind of character assassination of John Geer that would most likely take place if the case went to trial. One question, however, is why at this late stage was this suddenly a concern?

That the defense would employ this strategy was surely known from the very beginning of this case. Who put the bug in Harrington’s ear to make her concerned now? If the defense passed along such a message, it would certainly be witness tampering. If it comes from the prosecutor, it is merely concern and compassion for a victim’s family that has already suffered enough. Perhaps it’s merely a happy coincidence that it allows the prosecutor the pretense of getting tough on police misconduct while not forcing him to actually carry through with it.

Morrogh said that Harrington wanted the plea deal to spare her family further pain, but he did not mention how she felt about the sentence of 12 months. He specifically referenced conversations with John Geer’s mother, whom he said was vehemently opposed to the deal and wanted a life sentence. Even if Torres had been convicted of second degree manslaughter, the maximum sentence is 40 years under Virginia law. The minimum is 5 years.

In Virginia, involuntary manslaughter is punished as a Class 5 felony:

(e) For Class 5 felonies, a term of imprisonment of not less than one year nor more than 10 years, or in the discretion of the jury or the court trying the case without a jury, confinement in jail for not more than 12 months and a fine of not more than $2,500, either or both.

During the press conference after the proceedings, Jeff Stewart, John Geer’s best friend, reminded everyone that Geer had not committed any crime the day he was killed. Stewart recounted that in the police radio traffic, officers had discussed possibly stretching the facts of the incident to charge Geer with destruction of property, if they could prove that the furniture he tossed out on his front lawn belonged to Maura Harrington.

Destruction of property valued over $1,000 is punishable as a Class 6 felony:

“(f) For Class 6 felonies, a term of imprisonment of not less than one year nor more than five years, or in the discretion of the jury or the court trying the case without a jury, confinement in jail for not more than 12 months and a fine of not more than $2,500, either or both.”

If they had succeeded in convincing Geer to exit his residence, unscrupulous Fairfax County cops may have brought charges against him that would have resulted in the same or worse punishment that is now facing the man who killed him. If Fairfax County cops had concluded their interaction and merely respected the fact that Geer had not committed a crime and was acting within the rights afforded him under the constitution, he would be alive today.

None of the numerous people involved in the 2-year cover up that took place in the aftermath of John Geer’s death, namely the top brass at the police department, the county attorney’s office, the Fairfax County Board of Supervisors, the County Executive, and Deputy County Executive for Public Safety, have been terminated or criminally charged.

In laying out the justification for the plea deal, Morrogh also stated that he was concerned about the outcome with a jury,  since convictions are difficult to obtain in cases where police officers kill citizens, even though he noted, “This office is paid to try difficult cases.” Of course, a major reason why so many killer cops walk is because prosecutors so often don’t diligently present their cases, opting instead to take a fall and preserve their good working relationships with law enforcement agencies and unions.

During the press conference outside the courthouse, where photography and recording inside is forbidden, Morrogh informed reporters that the plea deal also met his objective of securing a felony conviction which would prevent Torres from working in law enforcement or legally owning a gun again. Yes, obtaining a felony conviction for a cop who violated department protocol and basic firearm safety rules and killed a man because his unstable mind manufactured a threat where there was none, counts as a victory.

Another miniscule victory is the apology Torres offered after the judge pronounced him guilty. In a voice that was scarcely audible, the former cop who initially said, “I don’t feel sorry for shooting the guy at all,” offered this to Geer’s surviving family:

“I am truly sorry for my actions. I’m heartbroken for Mr. Geer’s children. There are no words I can say today that can adequately express my remorse.”

Perhaps that is because his remorse could only be adequately expressed by not less than 5 and not more than 40 years in prison.

A Cruel Twist of Fate

John Geer’s parents, a handful of reporters, shameless shill for a local police union Sean “We could all be Adam Torres” Corcoran, and perhaps a row and a half of Torres’ family members, sat in the mostly empty courtroom today. Among them was Adam Torres’ wife, Danyal Torres, who started an ill-fated fundraiser when Torres was terminated from the police department. She was holding their youngest child who had been born while Torres was locked up at the Fairfax County Adult Detention Center awaiting trial.

Adam Torres may go down in history as the first Fairfax County police officer convicted for killing someone on duty, but he still has a second chance with his partner; the comfort and joy of raising his children into adulthood; and the ability to provide for his parents in their old age.

It is the ultimate irony and indignity that John Geer’s death seems to have gained Adam Torres everything Geer lost that day.

1.4k
SHARES
FacebookTwitterGoogleRedditTumblr
DiggLinkedinStumbleuponMailPrint
You Can Support Cop Block by shoppping on Amazon using the banner below:
BANNERS ARE CLICKABLE