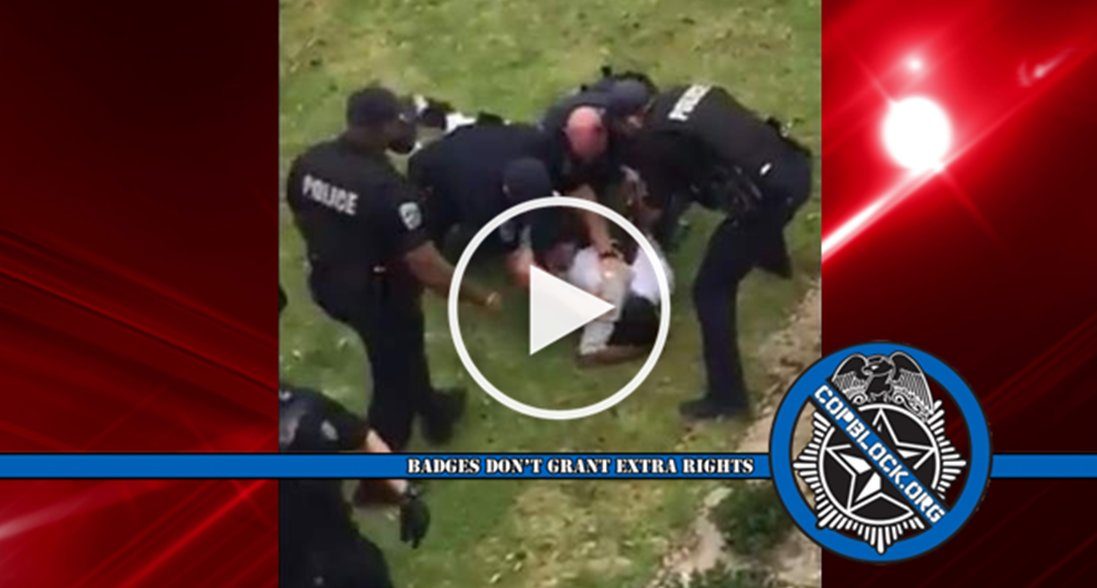 Video has emerged showing a Louisiana 16-year-old being punched in the face by a Baton Rouge police officer while other cops hold him down on the ground.

Danielle Todd said her son, Ja’Colby Davis, and his 14-year-old brother, were attending the annual Earth Day celebration in downtown Baton Rouge on Sunday when a fight broke out near them that resulted in unwarranted police attention.

The teen was grabbed by an officer after he backed away and “wasn’t fighting at all,” according to Todd, before he asked why he was being touched and protested that he hadn’t did anything to justify being accosted.

Davis, a sophomore at McKinley High School, was then thrown to the ground by the cop, Todd said, and footage recorded from the scene shows him being held down by one officer while another delivers six blows to his head and face.

Davis is seen struggling and attempting to shield himself from the blows before three other cops come and hold him down on the ground while he is handcuffed, one pointing a taser at him that wasn’t deployed.

“I feel like this shouldn’t happen to anyone’s child,” Todd said. “No parent should have to see a video of police officers beating their child for asking a question.”

According to Baton Rouge police spokesman Sgt. Don Coppola, the teen was arrested and booked into the East Baton Rouge Parish Juvenile Detention Center on charges of battery of a police officer and resisting an officer with violence or force.

“While we cannot speak yet to the context in which this incident occurred, we can assure you that we are treating the situation with the utmost care and concern as we initiate an Internal Affairs Investigation,” Coppola said in a statement.

The Sgt. said on Monday that he didn’t know whether any of the officers involved in the incident have been placed on administrative leave, which is standard when internal probes are launched, but he defended their actions.

“Obviously it was some type of act of violence toward the officer prior to what was seen in the video,” he asserted, adding that the clip only shows part of the story.

Police said that three other teens were arrested during the event in connection with an armed robbery attempt and shooting that took place after a fight, but did not confirm whether the fight was the same one that occurred prior to Davis’ arrest.

Davis was scheduled to make a first appearance in court at 1 p.m. on Monday, according to Todd, amidst calls for the unidentified officer seen pummeling him in the video to be fired. It appears that none of the cops involved were wearing body-cameras.