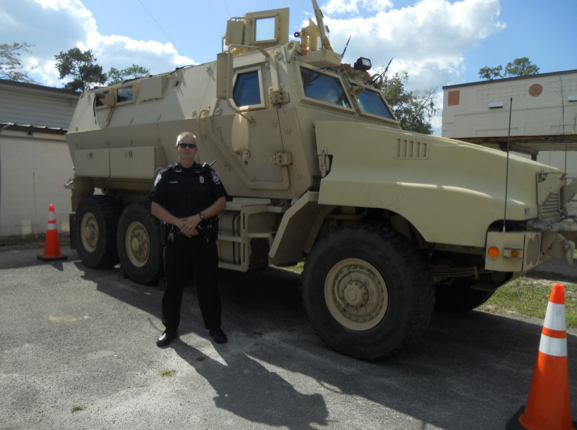 There are a couple reasons why the United States military is not used to police its own citizens. Some of them are constitutional (Posse Comitatus) but most are practical. The combat arms branches of the military are designed to close in and destroy the enemy by any and all means available. If you deploy combat personnel on the street to police the citizenry you turn the citizenry into the enemy. And as I just stated, it’s the job of the military to destroy the enemy. It’s that simple.

And yet here in America over the last ten years or so we have seen the steady rise of the militarized police force. Hundreds of departments have acquired or are in the process of acquiring military grade hardware, including armored vehicles such as the MRAP and fully automatic weapons. That begs the question: what are they preparing for? Do you really need a vehicle designed to withstand roadside bombs to serve a warrant or enforce law in the community? I would answer with an emphatic “no”.

The militarization of the police is only one part of an interconnected problem that feeds off of itself. Using typical government logic the state, once it’s spent millions of your tax dollars acquiring armored vehicles and machine guns, has to justify their purchase by deploying them into the street. This coupled with an increasing outlook among law enforcement that they are in a war zone when on patrol has led to some of the horrendous atrocities we’ve witnessed over the last few years. The “shoot first, ask questions later” approach to policing is a byproduct of viewing the population as enemy combatants.  The video below, featured on Counter Current News demonstrates this mentality taken to the extreme.

Even a “simple” stop-and-talk with law enforcement feels more like a checkpoint in Afghanistan than it does a chat with someone who is supposed to be fostering safety and community support. Many of the officers I’ve interacted with have been blunt and unfriendly at best and threatening at the worst. It’s quite clear that we, the people, are viewed as the enemy. And when you turn the police into a pseudo-military we all know what happens to the enemy.

The ACLU published an article as part of their Criminal Law Reform series that I encourage you to read. It highlights many of the problems with the police in America today including the acquisition of military equipment by many departments as well as the issues of excessive force and racial profiling.

To conclude we are witnessing the transformation of the police from an institution designed to help and protect the people into an apparatus that is built to repress and destroy them if they step out of line. The police are preparing for war and their behavior in conjunction with their attitudes suggest that many already believe they are in the thick of that war.