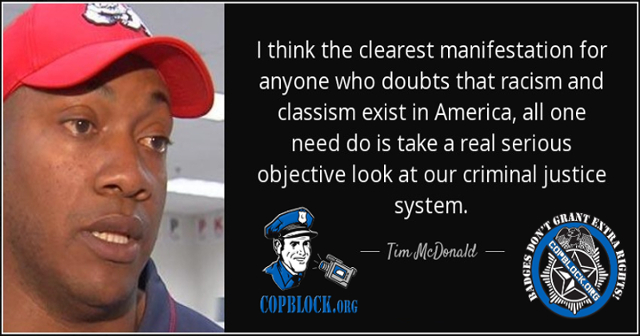 This post was written by James C. Wilson and originally published at the Center For a Stateless Society (C4SS) under the title “America’s Divided Justice System.” Posts and other content can be submitted to the CopBlock Network via the CopBlock.org Submission Page. (Note: This has been posted in its original form and no edits to the original text were made. Some links were added within the text.)

The post consists of a book review of “The Divide: American Injustice in the Age of the Wealth Gap” by Matt Taibbi. That book relates to what is effectively two different “justice” systems faced by the wealthy and the poor, minorities, and immigrants. The latter group is the target of enforcement policies such as “broken windows” and “zero tolerance” that emphasize cracking down on even the most minor of crimes, often times consisting of victimless crimes. In contrast, the former group benefits from policies that have come to be referred to as “too be to fail” or “too big to jail” that effectively allow fraud and other financial crimes when committed by wealthy people.

Obviously, the disparity between the ability of wealthy people and poor people to hire lawyers, expend time, and utilize personal connections within that system in order to fight any charges they may face exacerbate those differing experiences with the judicial system even further.

The Divide: American Injustice in the Age of the Wealth Gap by Matt Taibbi (2014).

One does not often find it a pleasant surprise to receive unpleasant information, but this is a reaction many readers will get from Matt Taibbi’s 2014 book The Divide: American Injustice in the Age of the Wealth Gap. While the book has largely been billed as a piece on the evils of growing economic inequality in the US, a more accurate description would be that it documents the discrepancy in how the American legal system treats wealthy offenders as opposed to poor ones. Taibbi’s thesis is that America’s legal system lets the wealthy get away with massive injustices, while the poor, racial minorities and immigrants are faced with draconian punishments (not to mention nightmarish bureaucracy) for minor violations and even unsubstantiated allegations. The picture he paints is not a pleasant one, but the author’s storytelling ability and grasp of the subject matter make for a surprisingly enjoyable read.

The Divide: American Injustice in the Age of the Wealth Gap

Matt Taibbi is best known as a generally left-of-center columnist for Rolling Stone, for which he is arguably the star political writer. He has also written for The Nation, Playboy and New York Press as well as several books of his own. While Taibbi is clearly in the liberal or social democratic camp, The Divide offers much that is of interest to libertarians, especially where it criticizes the excesses of bureaucracy and the prosecution of victim-less crimes. Left libertarians especially will appreciate that the book strongly echoes their concerns that the state actively takes actions that make the poor even worse off. While Taibbi uses statistics to make his case, the real driving force of the book is his depictions of specific examples of injustices. In these anecdotes the human consequences of plutocracy are vividly illustrated.

Taibbi alternates between stories of white collar criminal activity going unpunished and mean-spirited state aggression leveled at poor people. This does well to illustrate Taibbi’s point that the rich and poor in America live in two different worlds when it comes to treatment by law enforcement. However it may be the book’s biggest weakness for some readers who will find the back and fourth changes in setting distracting. To his credit, Taibbi ultimately ties his narratives together, asserting that lax treatment for the rich and overly harsh punishment of the poor combine to form a dystopian reality.

Taibbi begins with Eric Holder, the Clinton administration official who would become Attorney General under Barack Obama. In the late nineties Holder authored a memo which made explicit the concept of “Collateral Consequences.” Holder argued that courts could consider the indirect negative economic consequences of subjecting large companies to legal penalties if a court ruled against them. This idea would later become known as “too big to fail” and by extension “too big to jail.”  Between his time with the Clinton and Obama administrations, Holder worked with Covington and Burling, a law firm that pioneered the use of “Collateral Consequences” to keep major companies from facing legal penalties. Taibbi largely credits the Clinton administration for passing laws which  exacerbated the disparity in legal punishment between the rich and the poor. Specifically he notes that Clinton’s presidency marked a time of agreement between democrats and republicans on “getting tough on crime,” specifically crime committed by poor people. leading to the escalated war on drugs and increased prison population (specifically the black prison population) during Clinton’s presidency. This was coupled with an increased leniency towards crimes committed in the financial sector. Taibbi claims it is no coincidence that Goldman Sachs was among the biggest contributors to both Bill Clinton’s and Barack Obama’s presidential campaigns (not to mention Hillary Clinton’s current campaign).

All of this occurred during a sharp decrease in overall crime, which continued through the 2000’s. Taibbi notes that as crime decreased police officers whose performance and promotion potential was evaluated on numbers of arrests were forced to chase increasingly pettier offenses. Police adopted a wide net strategy, comparable to fishing with dynamite, in which large numbers of ostensibly “suspicious” poor or working class people would be searched, arrested, ticketed, or issued summons for minor violations which they may or may not have committed. These offenders almost certainly did not have the time or money to fight the allegations in court. Arrests for marijuana and violations like “blocking pedestrian traffic” sky-rocketed. Taibbi discusses one instance where the accused chose to fight this particular allegation due to the fact that the supposed offense took place on a morning when there was no pedestrian traffic. His own defender and the judge had little knowledge of how to handle this as the entire system is set up to encourage guilty pleas for such offenses. In another instance cops accuse a young man of drawing graffiti in black ink with a pink highlighter. Unsurprisingly police cruelty, dishonesty and downright stupidity are often on full display in this book.

Taibbi gives a great deal of attention to Howard Safir, the Giuliani-appointed New York Police Commissioner, who expanded the “Broken Windows” and “Zero Tolerance” policies of his more well known predecessor Bill Bratton, with an even greater focus on arresting and fining people for petty offenses. Under Safir, arrests for marijuana sky rocketed. Taibbi notes that the accused faced hours on end at court hearings, in which large numbers of cases are reviewed by judges who themselves would rather be anywhere else. The court appearances and other bureaucratic red tape often forced the accused to take time off from work or seek child care that they otherwise would not have to. Taibbi discusses many of the violations reviewed as “administrative crimes” which while technically illegal do not cause demonstrable harm to anyone. While crime with actual victims had gone down, police focused on violations of arbitrary statutes. Illegal immigration is one example. Taibbi relates this to occurrences of police setting up “drunk driving” checkpoints at the roads going in and out of immigrant neighborhoods during times when people would come and go to work. He notes that the increased deportations that occurred under the Obama administration enabled a massive kidnapping industry in Latin America, in which kidnappers would locate deportees while seeking ransoms from their remaining relatives in the US.

Elsewhere Taibbi discusses the collapse of Lehman Brothers and its secret backroom deal with the English firm Barclays that ripped off millions from smaller creditors around the world. This section is an excellent primer on the lead-up to the 2008 financial crisis. As is the chapter on JPMorgan Chase, which committed massive fraud involving fake credit card judgement. He notes that the business of collecting delinquent credit card debt itself relies on fraud, as it would be uneconomical for collection agencies to review the actual records of the alleged debtors. Often they instead employ “robo-signing” (the practice of having entry level staffers sign as many documents as possible, without actually reading them) and “gutter service” where a server may or may not deliver a summons to an accused who may or may not show up to contest the allegation. In all cases discussed, real people are genuinely harmed and the perpetrators are never given more than negligible fines. He also contrasts the treatment of crimes committed by HSBC (a firm that has worked with murderous drug cartels and Islamist terrorists) to the disproportionately worse treatment of small time drug users.

In one of the more interesting stories of the book, a gang of well-funded hedge fund managers attempt to bully the owner of a smaller insurance firm, Fairfax Financial Holdings, into going out of business through an elaborate campaign of harassment, threats, late-night phone calls, and phony accusations of a criminal activity. This may be of interest to libertarians looking for a starting point to a discussion of what forms of malicious activity do and do not violate the non-aggression principle. Similarly, Taibbi’s discussion of welfare recipients who largely forgo their right to freedom from government search and seizure without probable cause is a potential starting point for conversation. Such people are often subject to inspectors rooting through their underwear drawers and bathrooms looking for evidence of unreported income. While Taibbi’s sympathy for people on welfare may rub some mainstream libertarians the wrong way, he argues that regardless whether one opposes the welfare state or not, one should find this excessive, especially when such zeal for fraud prevention is not matched when it comes to white-collar criminals committing the same crimes on a larger scale.

Overall Taibbi finds that the poor are subject to bureaucracy while the rich are able to become bureaucracies in and of themselves by hiring lawyers capable of generating decades of red tape for anyone who makes any accusation against them. He feels that America has such love for and fear of people with power and money and disdain for those who lack it, that its people allow two divergent class-based legal systems to govern. The book is an engaging and often entertaining read that will likely find a sympathetic ear from anyone who values justice.