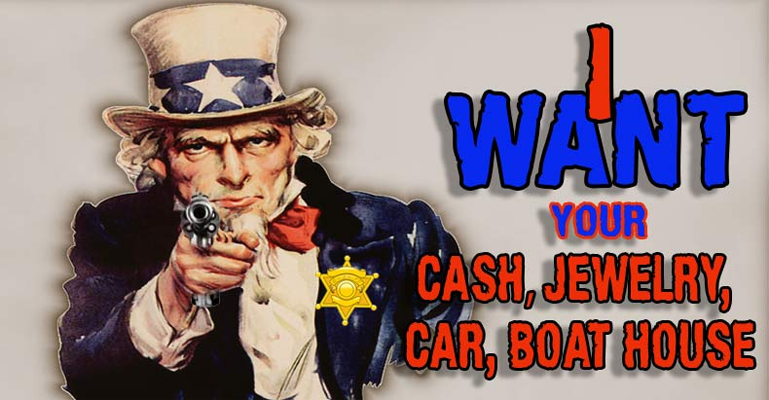 This is the first article in a series on how the war on drugs is state-sanctioned theft, rape, murder, and class warfare.

One of the biggest lies our government tells us is that it wages the War on Drugs to keep us safe. More than 40 years after it was started, we know that it has been a colossally-expensive epic failure on its stated goals, was intentionally designed to further disenfranchise marginalized groups, and has become a full-fledged assault on our civil liberties.

Even with all the billions of tax dollars it spends each year, and all the flashy photo ops of seized drugs stacked on tables, the Drug Enforcement Agency only stops 1% of the illegal drug supply from being distributed in America, according to the video below. Not only is law enforcement pathetically inept at stemming the flow of drugs, they are active participants in the illicit drug trade at both the federal and local level:

That drug prohibition causes far more harm than it supposedly prevents would not even be a question of debate were it not for the fact that so many people’s livelihoods now depend on waging it. The ugly unspoken truth is that the War on Drugs is a massive jobs and funding program for law enforcement that is operated under the guise of saving people from the evils of substance abuse.

Everything we do is suspect, and everything we own is subject to seizure— take cash for an example. The saying used to be that “cash is king,’ however these days it’s “cash is criminal” since cash transactions and even withdrawing or carrying “large amounts,” basically more than a few dollars, of your own money is now considered an indication of criminal activity (see here).  Section 31 U.S.C. 5103 states, “United States coins and currency (including Federal reserve notes and circulating notes of Federal reserve banks and national banks) are legal tender for all debts, public charges, taxes, and dues,” so why does the government that prints that same money have such a problem with its citizens using it?

Cash transactions are anonymous, so it is assumed that people who make cash transactions are trying to avoid leaving records of their activities. And if any aspect of your life is not a traceable, verifiable open book for the government, obviously you must be hiding something.  Never mind that the case is often that people simply find using cash allows them to manage their finances more responsibly without risking overdraft or interest fees, or are making a purchase that requires cash, such as buying a used car, or that they simply do not have access to bank accounts due to low income or poor credit history.

According to the FDIC, “7.7 percent (1 in 13) of households in the United States were unbanked in 2013. This proportion represented approximately 16.7 million adults.”  20.0 percent of U.S. households, approximately 50.9 million adults, were underbanked in 2013, “meaning that they had a bank account but also used alternative financial services (AFS) outside of the banking system,” such as money orders, check cashing, remittances, payday loans, refund anticipation loans, rent-to-own services, pawn shops, or auto title loans.

The FDIC report also states “In many cases, financial life events, such as job loss, significant income loss or a new job, appear to be important reasons why households leave or enter the banking system.” The documentary Spent: Looking for Change, highlights the struggles of the unbanked and underbanked using the personal stories of several individuals.

While using cash out of preference or necessity is a perfectly legal activity, it is politically expedient for law enforcement agencies to pretend otherwise because they have incentives to do so. Civil asset forfeiture allows law enforcement agencies to take money, cars, houses, and other property that they suspect of being purchased with the proceeds from criminal activity or of being used in connection with criminal activity. The agencies then either keep or sell the property and use it or the proceeds for their own purposes. It’s such a huge cash cow for law enforcement that in 2014, the amount federal agencies netted through civil asset forfeiture, $5 billion, exceeded the amount Americans lost through burglaries, $3.5 billion. The actual amount seized is even higher than this, since this figure does not include the amounts taken by state and local law enforcement agencies.

Taking money from bad guys, sounds great, right? Oh, there’s a catch.  Cops don’t have to actually prove you committed any crime. They don’t even have to charge you with one. You, on the other hand, need to go to court and jump through whatever hoops the government requires to prove your innocence and get your property back. See How police took $53,000 from a Christian band, an orphanage and a church for a recent example of how police use civil forfeiture to knowingly steal from innocent citizens who have no involvement in the drug trade.

Cops and prosecutors also intimidate people into giving up their property by threatening to pursue criminal charges if they try get it back.From Taken, New Yorker Magazine’s investigation into one Texas town’s massively corrupt civil asset forfeiture program:

“The eye-opening event was pulling those files,” Guillory told me. One of the first cases that caught his attention was titled State of Texas vs. One Gold Crucifix. The police had confiscated a simple gold cross that a woman wore around her neck after pulling her over for a minor traffic violation. No contraband was reported, no criminal charges were filed, and no traffic ticket was issued. That’s how it went in dozens more cases involving cash, cars, and jewelry. A number of files contained slips of paper of a sort he’d never seen before. These were roadside property waivers, improvised by the district attorney, which threatened criminal charges unless drivers agreed to hand over valuables.

Law enforcement agencies say this is a vital tactic for battling drug kingpins and vast criminal enterprises, but the typical value of property seized tends to be low, victimizing citizens who usually have the least resources, and the least ability to fight back.

The Institute for Justice, an organization at the forefront of the battle against abusive forfeiture practices, “was able to obtain property-level forfeiture data for 2012 from 10 states, allowing median property values to be calculated. In those states, the median value of forfeited property ranged from $451 in Minnesota to $2,048 in Utah, not much more than an American’s average annual cell phone bill.”

Meanwhile what happens to the criminal masterminds who actually are involved in nefarious activities on a grand scale? They get a slap on the wrist. From the Rolling Stone article, Outrageous HSBC Settlement Proves the Drug War is a Joke:

[Assistant Attorney General] Breuer this week signed off on a settlement deal with the British banking giant HSBC that is the ultimate insult to every ordinary person who’s ever had his life altered by a narcotics charge. Despite the fact that HSBC admitted to laundering billions of dollars for Colombian and Mexican drug cartels (among others) and violating a host of important banking laws (from the Bank Secrecy Act to the Trading With the Enemy Act), Breuer and his Justice Department elected not to pursue criminal prosecutions of the bank, opting instead for a “record” financial settlement of $1.9 billion, which as one analyst noted is about five weeks of income for the bank.

The banks’ laundering transactions were so brazen that the NSA probably could have spotted them from space. Breuer admitted that drug dealers would sometimes come to HSBC’s Mexican branches and “deposit hundreds of thousands of dollars in cash, in a single day, into a single account, using boxes designed to fit the precise dimensions of the teller windows.”

Even more shocking, the Justice Department’s response to learning about all of this was to do exactly the same thing that the HSBC executives did in the first place to get themselves in trouble – they took money to look the other way.

And not only did they sell out to drug dealers, they sold out cheap. You’ll hear bragging this week by the Obama administration that they wrested a record penalty from HSBC, but it’s a joke. Some of the penalties involved will literally make you laugh out loud. This is from Breuer’s announcement:

As a result of the government’s investigation, HSBC has . . . “clawed back” deferred compensation bonuses given to some of its most senior U.S. anti-money laundering and compliance officers, and agreed to partially defer bonus compensation for its most senior officials during the five-year period of the deferred prosecution agreement.

Wow. So the executives who spent a decade laundering billions of dollars will have to partially defer their bonuses during the five-year deferred prosecution agreement? Are you fucking kidding me? That’s the punishment? The government’s negotiators couldn’t hold firm on forcing HSBC officials to completely wait to receive their ill-gotten bonuses? They had to settle on making them “partially” wait? Every honest prosecutor in America has to be puking his guts out at such bargaining tactics. What was the Justice Department’s opening offer – asking executives to restrict their Caribbean vacation time to nine weeks a year?

However there is some good news! Last year Montana and New Mexico passed reform measures that require a criminal conviction before assets can be stolen by state agents, and Nebraska just did, too.  Of course, several cities in New Mexico refuse to abide by the law and are now being sued by the Institute for Justice as a result, but it’s still progress, right? Also, the Department of Justice announced last year that it was drastically scaling back its equitable-sharing program, which state and local agencies have used to undermine local ordinances restricting forfeiture activities. Well, the impact wasn’t really as big as they first made it out to be, and that doesn’t matter anyway because DOJ already reinstated the program last month.

666
SHARES
FacebookTwitterGoogleRedditTumblr
DiggLinkedinStumbleuponMailPrint
You Can Support Cop Block by shoppping on Amazon using the banner below:
BANNERS ARE CLICKABLE