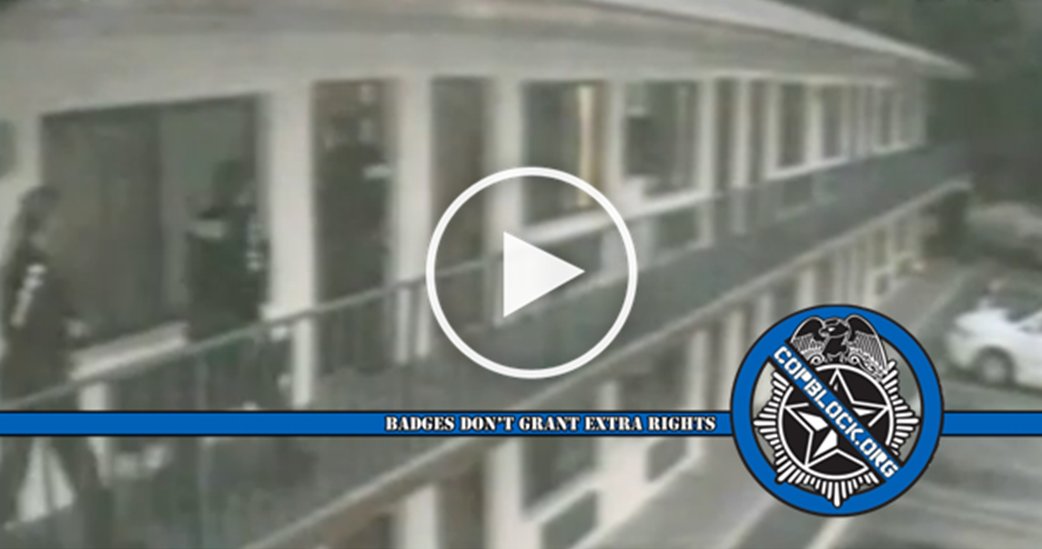 Three Florida cops have been charged and jailed following weeks of investigation into inconsistent statements surrounding a drug bust at a motel room last November.

Hall had testified under oath that she saw Jonathan Elliot make a drug transaction with another man and that he then agreed to speak with her after she knocked on the door of his room at the Tropicana Motel on West Vine Street.

In charging affidavits, Hall wrote that Elliot was arrested after he confessed to smoking pot and pointed to his stash, which contained 29.9 grams of cannabis – but the man testified in court that he never talked to the officer beforehand, and the three officers barged into his room.

The cops were then exposed after 30 seconds of grainy surveillance video revealed that Hall’s version of events was false, and Elliot’s felony marijuana possession charges were dropped.

The footage, which prosecutors did not know existed until the day of the hearing, shows the three officers surrounding Room 208 and then walking inside one by one before exiting 12 minutes later with Elliot in handcuffs.

“When things are [being said] that aren’t really happening, that’s when I have an issue,” Elliot said after he was cleared in the case. “But the fact they were able to get that video and actually see what went down… it’s a blessing.”

Following the hearing, prosecutors contacted KPD about Hall’s false testimony and the video, and the department “immediately” launched a review and decided to start a criminal investigation.

“There does not appear to be a knock on the door as there would be by officers who are conducting a knock and talk,” the arrest affidavits issued for the three officers on Tuesday say. “The movement appears to be covert and with a purpose… It appears the officers’ actions were planned and they acted as a team when they entered Elliot’s room.”

The affidavits also note that text messages exchanged between Hall and McFee during a recess at the March court hearing “clearly display knowledge and intent of perjury and malfeasance regarding the arrest of Jonathan Elliot.”

“They’re very professional individuals in here and it hurts. I walked by an officer today who was asking me questions and she was crying,” Kissimmee police spokeswoman Stacie Miller said. “They are very proud of this department, and when somebody does something that would shock the department like this, it effects all of us.”