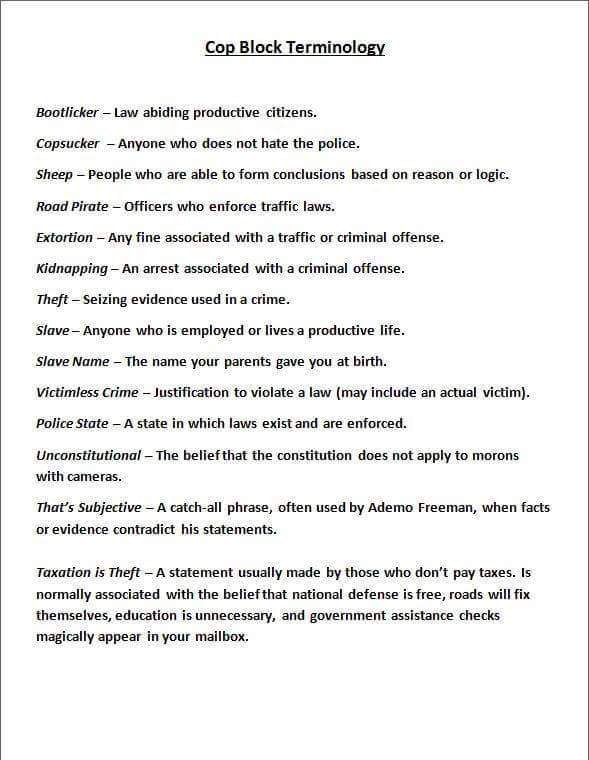 We get a lot of haters here at Cop Block because there’s nothing the Average American hates more than people who have the gall to complain about police violence. Police are heroes (practically gods) in the United States, albeit taxpayer-funded gods, so clearly they should not be subject to the same moral scrutiny as the rest of us peons. This explains why drawing attention to systemic police abuse routinely angers the masses.

And I don’t mean “gods” in a figurative way at all. The type of verbal abuse and death threats we receive here are similar to those spouted by Muslim extremists infuriated by offensive descriptions and depictions of Muhammad. For the Average American, police reverence approaches a blindly religious level.

Even as I bemoan the “Average American,” Cop Block has garnered some 1.6 million supporters on Facebook in its few incipient years, whereas Cop Block opponents rarely are able to attract more than a few paltry thousand. The movement calling for police to be morally accountable for their actions is a growing one; even so, police worship continues to be a mainstream tenet of American ideology.

I wouldn’t expect the blindly religious to be open to reason at all, but nevertheless, I thought I’d offer some pointers to the organization who issued the list of definitions above, in reference to Cop Block activities, and have taken the effort to correct their ignorance:

Good try, but not quite. Here, let me fix it for you. A more accurate description would be as follows:

People (whether citizens or not) who support the police with an irrational adoration only matched by their devotion to god. This is despite evidence of repeated instances of police misconduct (see here and here), and a legal system that clearly permits police to be above the law they claim to uphold, to steal, and to murder –

These bootlicking views also persist despite evidence that there is absolutely, unequivocally, no “war on cops.”

Copsucker – Anyone who does not hate the police.

Sheep – People who are able to form conclusions based on reason or logic.

Actually, reason and logic are powerful tools for the investigation of truth, not typically employed by those who love police with religious fervor. Bootlickers and Copsuckers will distort basic definitions to so that a violent beating is “preserving order,” murder is “keeping the peace” and theft is “doing a job” in a manner that would make George Orwell blush. Let’s not insult animals, but perhaps take a closer look at who is more prone to twisting definitions to fit their world view.

Slave – Anyone who is employed or lives a productive life.

Talk about strawmen. People who currently or in the past have blogged or agitated with Cop Block have encompassed a variety of productive people, including writers (obviously), scientists, college students, lawyers, entrepreneurs, among other professionals. But even assuming every single one of us was unemployed and unproductive, this would have nothing to do with the message at hand. If we insisted 2+2 = 4, would you disagree with us because we are unemployed and unproductive too?

Victimless Crime – Justification to violate a law (may include an actual victim).

Victimless means no victim. “Victimless” crimes include a wide variety of behaviors proscribed by American criminal codes everywhere, including drug-use, underage drinking, jaywalking, etc. This is fairly basic, but it’s understandable Bootlickers would not be able to grasp this concept. Again, it’s bootlickers and their beloved state that insist on distorting definitions to mask the immoral nature of government activities.

Police State – A state in which laws exist and are enforced.

Oh yes, obviously. If one criticizes ridiculous laws and police brutality, of course it is equivalent to advocating the evisceration of all laws, and amounts to support for murder, rape, and theft. Let’s not pretend the United States is a state in which some bare minimum of laws exists solely for the sake of preserving order. It has the highest imprisonment rate in the world both per capita and in pure numbers, much of it for non-violent crime. So fuck off with this completely erroneous implication.

Unconstitutional – The belief that the constitution does not apply to morons with cameras.

I honestly cannot even begin to guess what this means. The constitution is a set of rules pertaining to basic human rights, which arguably have become soft suggestions at this point. Solitary confinement and disproportionate punishment are “cruel and unusual,” but continue to persist. The First Amendment has been practically strangled, and due process is a total joke when people can be arrested for nothing more than resisting arrest, and prosecutors are immune from civil suit for wrongfully convicting people. Don’t even get me started on unreasonable search and seizure.

That being said, while courts differ on this hot topic, plenty of courts have upheld a constitutional right to film police. And you don’t have to trust us; read about at it Policeone.com. Ironically, it seems it’s actually the Bootlickers who are the morons holding the “belief that the constitution does not apply” to people with cameras.

Taxation is Theft – A statement usually made by those who don’t pay taxes. Is normally associated with the belief that national defense is free, roads will fix themselves, education is unnecessary, and government assistance checks magically appear in your mailbox.

One could fill a tome with the logical fallacies of insisting that government be in charge of defense, roads, education, and charity, to say nothing of the fact that along with these wonderful wars and perfect roads come plenty of waste – but I’ll assume for the sake of argument that these are all amazing “services” provided by the government. A robber or thief who takes his proceeds and donates it to the local animal shelter is no less a robber or thief. The products or services rendered at the end is not what determines whether theft or robbery has occurred; the distinction rests on whether the money was given voluntarily.