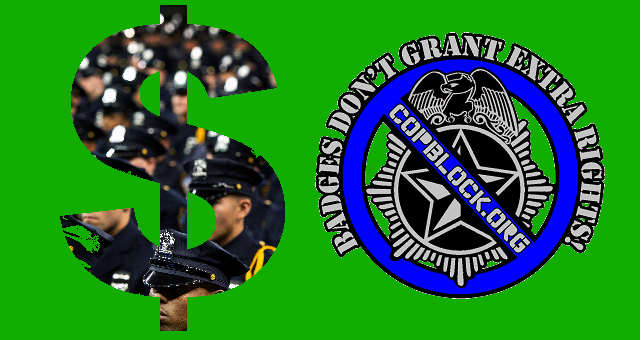 Many of my fellow CopBlock colleagues and other associated anarchists are ones to claim that privatizing policing will solve most of the issues. We have all seen these arguments many times and they tend to center around two key points: competition and accountability. Neither of which really make any sense.

When a private company competes, it does so in order to expand its services and thus the size of its organization. Which is exactly what policing does already, as I have previously presented through the Living Systems model. For an organization to be successful and thrive it must insure its own safety and growth first and foremost. Whether or not the organization is ran by the state or private interests makes absolutely no difference. The interest of the organization is always going to come first. Competition does nothing to dissuade a power structures reliance on force to ultimately advance itself.

Which is why accountability is futile. The problem with policing is not who is in charge of it, it is in the nature of the activity itself. Using force to place the will of an individual or group over another individual or group is always going to have the same results. And asking the institutions that monopolize force to be less aggressive is akin to asking a fox in a henhouse to intentionally starve itself. Admissions of aggression threaten the belief systems that give their monopolies consent, so neither are they likely to send in satiated foxes with better self control to take care of the hungry one in the henhouse. Accountability is not a possibility. It is not the source of funding that prevents it, it is the nature of institutionalized force.

You cannot have policing without force. You can have private security, but if you have reasons to need that, you are probably doing some wrong with your life.*** But policing is not about security or protection, it is about enforcing laws. Being subjected to laws that are upheld by the threat of violence against the individual is wrong whether cronyist oligarchal interests use the lobbying system to write laws indirectly, or whether they just do it directly with their blackened hearts right on their sleeves. Their interest will not change just because the apparatus they use does.

***What I meant when I wrote this is that most individuals who currently employee personal security tend to be the ruling class tyrants who do create reason enough to be paranoid through their destructive agendas and actions. They are also employed by many corporations, which are entities created by the state who have far more power in our system than actual human individuals. But I will concede there are some small business interests that might reasonably have need of some security services in light of humanities current climate.

And besides this, private policing has already illustrated a clear history of doing exactly what I have described. Its propensity for abuse and oppression are already known factors. Take for example the Pinkerton Detective Agency that began its march towards abusive monopoly of force when a syCOPhant snitched, got himself deputized and then went on to become one of the most wealthy individuals in history through institutionalized aggression and bloodshed. Even vigilante justice where individuals head out into the streets to ‘police’ them often turns out badly. Those who go looking for trouble never have any problem finding it.

Private policing is not a solution. It is a pipe dream. It is the hangover of minarchist babble that still exists in those who found their way clear of statism via libertarianism. I once found myself believing the very same thing. Yet I am also a living system, and thus my tendency towards growth has caused me to spiral around and from a new perspective see the flaws in carrying minarchist ideologies over into anarchist thought. The ‘ancaps’ are just as guilty of carrying their monopolist economic dogmas into anarchism as the ‘ancoms’ are of trying to drag their liberal utopia statism into it.

When it comes to monolithic entities, a power structure will eventually emerge, and from that the will of the individuals will come to be dominated by the power structures. Institutionalized force cannot exist without becoming and giving rise to other power structures and monolithic entities. For humanity to emerge from the nightmare of authoritarian rule we must stop letting our fears guide our thoughts and decisions. An argument for any kind of policing just fuels the delusion that policing is necessary. Sometimes you swallow a fly. Grab a glass of water and try not to think about it too much or soon you may find yourself dead of horse consumption.